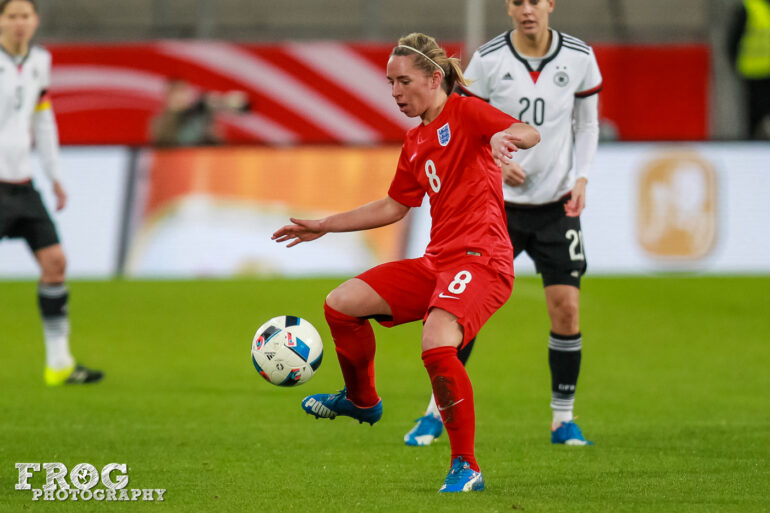 Taylor, England’s top goal scorer at Euro 2017, walked away with the Golden Boot for her efforts as well as being voted Vauxhall England’s Player of the Year. Midfielder Nobbs was voted Players’ Player of the Year by her teammates, as well as winning the best goal of the FA WSL Spring Series for her freekick that ended Manchester City’s unbeaten run.

The awards celebrated a 2017 which included the Lionesses reaching the Euro 2017 semifinals, an SSE Women’s FA Cup final which produced yet another record-breaking crowd and a Spring Series that saw four teams fighting for honors on the final day.

Speaking at the FA Women’s Football Awards on Friday, England vice-captain Nobbs said, “One million percent it’s more special when it’s voted for by your teammates. For people to think of you and write your name down is a real privilege and it was a real surprise to me.”

Speaking about Arsenal teammate and recently retired Lioness Alex Scott, Nobbs added, “There’s too many words really. She’s an inspiration to everyone, a massive role model to me personally.

“I have that privilege of saying I’ve played with a legend but thankfully we have her for a bit longer at Arsenal.”

For 31-year-old Taylor, it was a night that honored a significant achievement which saw her join a unique club of Heidi Mohr, Susan Mackensie, Lena Videkull, Carolina Morace, Claudia Müller, Inka Grings and Lotta Schelin as players who won the Golden Boot at a UEFA European Championships.

A hat trick against Scotland, followed by goals against Spain and France, with the latter ending a long winless run against the opposition, helped England progress to the semifinals.

“No way did I think I was going to win this, I thought all the other three deserved it over me,” said Taylor. “Looking at the journey I’ve had to this is unbelievable. We genuinely believed we could win the Euros, we thought it was our time but Netherlands deserved to win.

“To walk away so disappointed shows how far we’ve come, we beat France for the first time in 43 years, which was a huge achievement and I think we are in a better place than what we were, but it’s hard to let that defeat go.”

“It means a lot,” said the teenager. “Honestly, in no way did I think I’d win this. The journey I’ve had to win it, is unbelievable.

“Jordan Nobbs is the one person I’ve always looked up to, being on the same pitch against her is an honor.”

After Nobbs, the Toffees’ midfielder Michelle Hinnigan took home the Players’ Player Award in FA WSL 2, while Chelsea’s Fran Kirby and Doncaster’s Courtney Sweetman-Kirk picked up their trophies for being FA WSL 1 and 2 top scorers, respectively, in the Spring Series.

Manchester City and Durham were voted as the Clubs of the Season, and many more awards were handed out in the FA Women’s Premier League, as well as several individual awards, including