DaCosta Realizing a Dream with Portugal 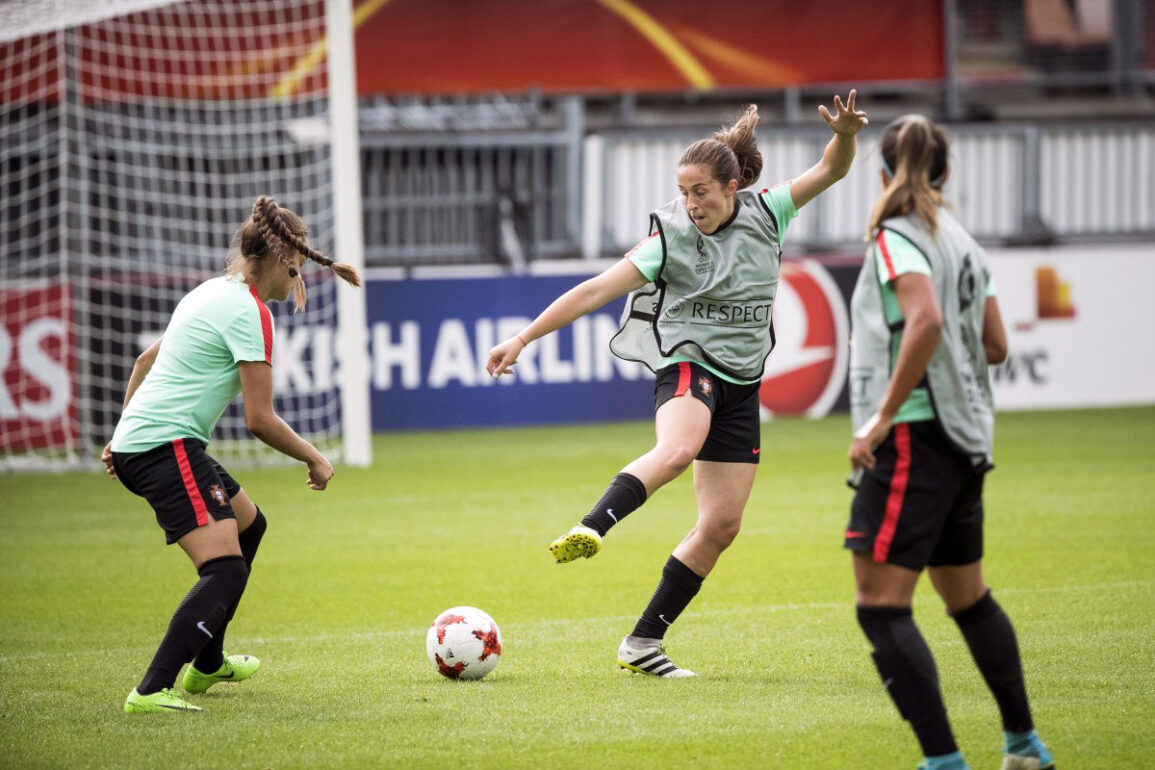 There aren’t many Portuguese internationals, either male or female, who can claim they grew up in New York. Most are well acclimatized to the traditional red rooftops of the Iberian countries and the golden beaches provided by the Algarve.

But not Amanda DaCosta, the Portugal midfielder who spent ten years working her way through the ranks of the U.S. youth international scene before choosing to pursue her dream of representing Portugal in a major international tournament.

The 27-year-old got her wish quicker than she may have imagined, just 18 months after making her debut in a Euro 2017 qualifier against future tournament opponents Spain, DaCosta would walk out against the same opposition last week for her major tournament bow.

“It’s been so good,” she said. “Everyone has been really welcoming since I came over here. A lot do speak English which is good, good and bad, I almost wish nobody spoke to English so I could learn Portuguese quicker!

“But I’m doing a lot of work learning it, I’ve got to experience first-hand the culture that runs in my family, which has been an amazing experience. It’s really unique being able to do it through soccer, I don’t know if I would have got this opportunity otherwise. It’s been the best decision I’ve made.”

Despite representing the country in which she was born at U-17, 20, and 23 levels, DaCosta never looked likely to break into a side that was going from strength to strength, winning the World Cup in 2015 not long after the midfielder had returned from a two-year spell in England.

Always aware of her Portuguese heritage, it wasn’t a difficult decision for DaCosta to make the move.

“I guess it was after the first NWSL season when I started to wonder about it,” she admitted. “It was realizing I was at a point in my life where I’d want something new after soccer and that I hadn’t fulfilled everything as a soccer player.

“I couldn’t ever move on with my life if I didn’t try hard to do that. Being with the USA up to 23 was amazing, I’d experienced it for ten years but I wanted more. I envisioned playing in the Euros for Portugal when I was younger so it was time to take it to the next level.”

It’s not like DaCosta doesn’t fit the bill. Despite her New York accent still being incredibly clear, the former Liverpool player couldn’t have more Portuguese running through her veins if she tried.

“Both my parents are Portuguese, they didn’t force me to speak the language but I wish they did. I’m so mad at them, I wish they had and I tell them all the time,” she laughed.

“I was lucky growing up with that heritage behind me, my grandparents live in New York but barely speak English. I had the food, the culture, the language, and it was cool I had that in my childhood — I’m pretty lucky!”

Despite all the perks, DaCosta’s first international tournament got off to an auspicious start. Portugal went down 2-0 to neighbors Spain, the same score line from when they met in Badajoz during the qualification campaign.

But a hard-fought win over Scotland has given DaCosta and her team a fighting chance, but it’s likely they’ll have to get a good result against Mark Sampson’s England on Thursday to have any chance of progressing at the experience of their local rivals.

“It’s hard in a tournament like this, you need to have a short memory and turn-the-page-in-your-head kind of thing,” she said of the defeat to Spain.

“We tried to take the positives out of it, I guess. We know we work very hard and try to make it tough for teams. We all have expectations to perform as best we can, we have a ‘one-game-at-a-time’ mentality.”

On Thursday, DaCosta will face some familiar faces after spending two years in the FA Women’s Super League with Liverpool — winning the competition in both her years across the pond.

Lucy Bronze and Fara Williams were both teammates with DaCosta under Matt Beard at Liverpool, and she’s looking forward to coming up against them in Tilburg.

“I have some old teammates over there so it’s going to be cool,” she said. “Ever since the first time I stepped on the field there it’s grown a lot, it’s a credit to the support and the FA WSL.”

DaCosta didn’t take long to make an impact, just one month into the new season back in 2013, Liverpool rocked up to face the unbeatable Arsenal Ladies, a match that would be played at the Emirates Stadium.

Liverpool stunned the women’s football community, not just beating Arsenal, but demolishing them, 4-0, with DaCosta scoring her first two goals in English football.

“That was one of the best memories ever,” she recalled. “It was just so cool, it was amazing to get over there. Liverpool had overhauled their whole program. I was able to make a difference, I got to play in the Champions League, which isn’t bad and it was pretty nice to end Arsenal’s streak. It reinvigorated my love for the game.”

But it wouldn’t be the most dramatic moment of her career in Widnes. That would be saved for her final match before returning to the United States.

Beard’s side had found it a struggle to defend their title, slipping behind both Chelsea and Birmingham City going into the final day of the 2014 season.

Going into their final game against Bristol Academy, Liverpool had to hope Birmingham drew or lost, and that Chelsea lost full stop.

With minutes to go, Emma Hayes’s Chelsea were 2-1 down at Manchester City, while Birmingham were being held by a stubborn Notts County side and an inspired performance by goalkeeper Carly Telford.

Liverpool were cruising at home to Bristol, and only had to wait while the agony played out at two different stadiums around the country.

“It was crazy, we were all waiting for the scores to come through. The game was over and we didn’t really celebrate. We didn’t know if we’d won, we were confused, it took forever.”

Liverpool had won, and soon the news spread from the stands onto the pitch. “It started from the top of the stands,” DaCosta recalled. “It was just cheering and it got louder and louder. It was weird, we were third favorites. It was difficult the second season because teams begin to figure you out but we really came together.”

After spells back in the states with the National Women’s Soccer League’s Washington Spirit and Chicago Red Stars, DaCosta reunited with her old manager Beard in Boston for the 2017 season.

“We’re on the way up, I’m sure of that; we’re starting to come together now,” she said. “We’re working out how to win games and learning how to pick up points. The NWSL is different, there’s a lot of traveling and time differences but we will continue to grow.”

At 27, the Portugal international is now in the peak years of her career, but it started a lot earlier than that for the midfielder.

Like many young girls who grow up interested in soccer, DaCosta had a ball at her feet from a very early age.

“It was the Portuguese culture, literally the second I could crawl I had a soccer ball with me all the time,” she said.

“Where I grew up, I played something called micro-soccer, I didn’t even know it was allowed, I was so young!

“My parents started it and I didn’t mind. We’d watch Luis Figo, he was my favorite player, and my dad shared a name with Rui Costa, which I thought was so cool. My dad had the same name as this legend, my dad influenced me a lot. I loved it and I was good at it, I had a natural ability, and I’ve worked so hard since.”