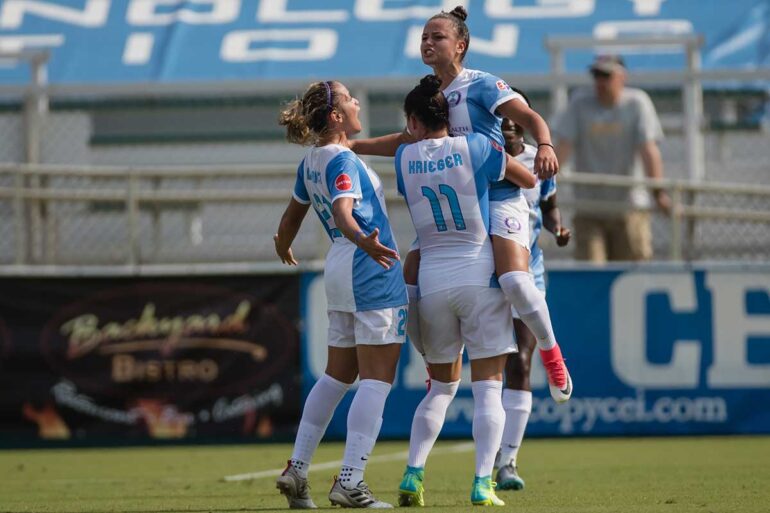 The Orlando Pride won its first game of the National Women’s Soccer League (NWSL) season and handed the North Carolina Courage its first loss of the season with a 3-1 win at Orlando City Stadium in Orlando, Florida.

The opening minutes was a battle of the respective defenses and midfields as both teams probed but couldn’t generate much in terms of scoring opportunities. In the 44th minute, Jamia Fields took an Ali Krieger pass at the midfield line and made a turn with the ball that gave her enough space and allowed her to take a touch that left her in a foot race with center back Abby Erceg. Erceg was given a yellow on the play that would prove costly later in the match. Both teams went in the halftime break knotted at zero.

What the first half lacked in goal scoring was made up for in the second half.

In the 49th minute, Camila fed Krieger  making a run on the right. Krieger blew past Sam Witteman and sent in a cross that squared across the entire goal face and Courage defenders to a waiting Chioma Ubogagu, who made no mistake with her left-footed shot to the near post that beat goalkeeper Sabrina D’Angelo.

It was Ubogagu’s first goal of the season and makes the Pride the only team to score on the Courage so far this season.

A minute later, Jamia Fields sent a through ball that Camila out ran Erceg to get to. Camila sent a toe-poked shot past D’Angelo to give the Pride a 2-0 lead.

The Courage cut the deficit in the 51st minute. Lynn Williams drove the ball down the left side and drew the Pride defense and then found Debinha at the top of the box for a right-footed shot that beat goalkeeper Ashlyn Harris to the far post.

In the 53rd minute, Harris made a point-blank save on a Sam Mewis header that looked like it would be the equalizer.

In the 57th minute, Erceg fouled Kristen Edmonds and shown a red card forcing the Courage down to 10 players for the rest of the match.

The Pride added its final goal in the 82nd minute. Marta found Jasmyne Spencer making a run that split the Courage defense and put her in one-on-one with D’Angelo. Spencer sent a composed right-footed shot past D’Angelo well off her line to make the score 3-1.

Up next for Orlando is a trip to Seattle to face a Reign team coming off a 6-2 win over Washington. North Carolina returns home to face Chicago.