U.S. to Host Tournament of Nations with Australia, Brazil, and Japan Participating 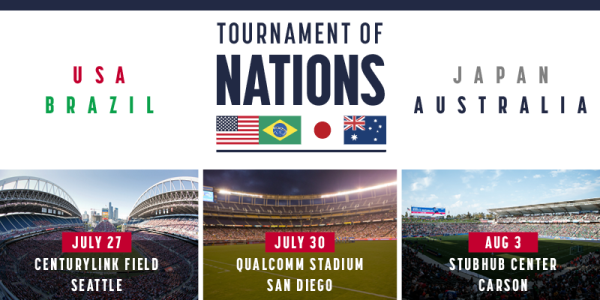 The U.S. Women’s National Team (USWNT) will host a four-team tournament, called the Tournament of Nations, in late July and early August. Joining the USWNT are Australia, Brazil, and Japan. ESPN and ESPN2 will televise the USWNT matches.

Tournament play will be in three venues on the west coast, with stops in Seattle, San Diego, and Los Angeles.

The Tournament of Nations is expected to be held during years in which a Women’s World Cup or Olympic Games is not held. The same four teams will headline next year’s tournament.

The National Women’s Soccer League (NWSL) will be in midseason during the tournament but has a scheduled break during the weekend of July 29–July 30 for the UEFA Women’s Euro 2017 tournament, which falls within the FIFA international match calendar window of July 16 through August 6.

No word yet on how much time national team players are expected to miss for the tournament. The NWSL has a full slate of games on July 22 as well as games schedule for August 4 and August 5.

The tournament will be round-robin style with doubleheader matches played on three days. The winner will be determined by the total number of points accumulated during the eight-day tournament. Standard point allowances are in effect: three points for a win and one point for a tie.

Point tie-breakers will be in the following order: overall goal difference, most goals scored, head-to-head results, and then FIFA ranking.