Courage Remain Perfect after 1-0 Win over the Breakers 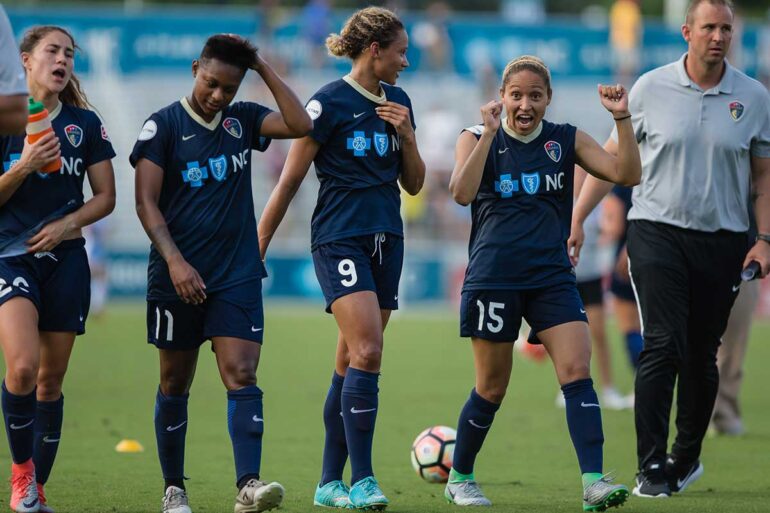 The North Carolina Courage remained perfect on the 2017 National Women’s Soccer League (NWSL) season after a 1-0 win over the Boston Breakers at Jordan Field in Boston, Massachusetts. The Courage improved to 4-0-0 while the Breakers fell to 2-2-0.

The Courage made two changes to its lineup that defeated the Pride, 3-1, last week, both in defense: Sam Witteman in for late-scratch Jaelene Hinkle and Taylor Smith in for Yuri Kawamura. North Carolina lined up in a 4-4-2 while Boston went with a 4-5-1. Margaret Purce got her second start and lined up in the midfield.

In the 12th minute, Lynn Williams had an opportunity in the box but Angela Salem tracked back and made a sliding block to push the ball out of bounds.

Boston’s Adriana Leon got off a right-footed half-volley on goal in the 15th minute that took an awkward bounce and forced Courage goalkeeper Sabrina D’Angelo to reverse direction and make a one-handed save. The ball was pinged around from a corner kick and landed to Leon at the top of the box.

The match’s lone goal came in the 32nd minute when Jessica McDonald got on the end of a Abby Erceg header that hit the crossbar and put away a left-footed shot past goalkeeper Abby Smith.

The match was a battle in the midfield with not many chances for either side in the second half.

D’Angelo earned her third shutout of the season and made two saves. Until McDonald’s goal, Smith was on a shutout streak that stopped at 254 minutes and makes her the holder of the club’s longest shutout streak in NWSL.

The Courage’s Smith earned her first start of the season while second-half substitute Amanda Frisbie made her debut for Boston.

Boston returns to the road to face Chicago on Sunday, May 14, and then returns home to host Portland on May 19.

North Carolina heads to Florida to take on Orlando on Sunday, May 14.