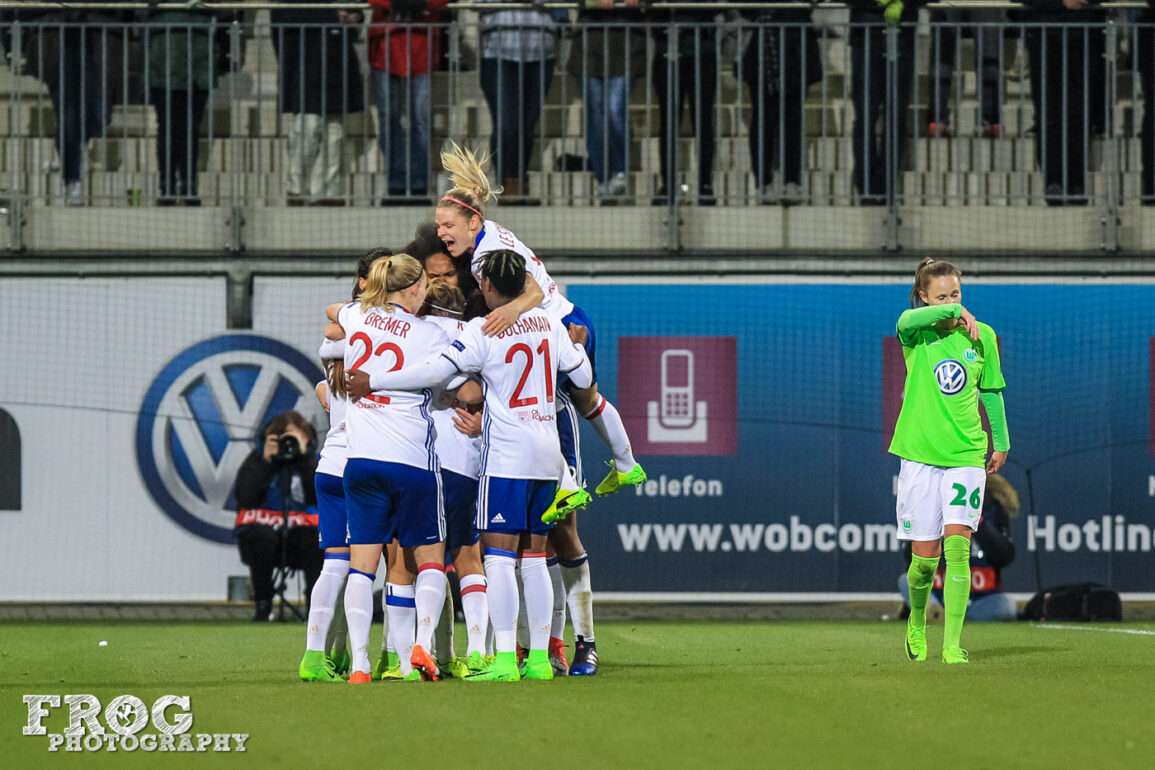 Manchester City hosted Olympique Lyonnais in the first leg of one semifinal of the UEFA Women’s Champions League. Lyon won, 3-1, on goals from Saki Kumagai (2′-pk), Dzsenifer Marozsán (16′), and Eugénie Le Sommer (68′). Kosovare Asllani scored for Man City in the 10th minute. Lyon will host the return leg on April 29. Richard Laverty has highlights the main takeaways from the first leg.

In 2016, Manchester City’s Lucy Bronze tormented left backs across the country as Nick Cushing’s side swept all aside as they took home their first FA WSL (FA Women’s Super League) title as well as the Continental Cup.

With Amel Majri playing as a wing back rather than part of a back four, Bronze was involved in a 90-minute tussle with the France international but Lyon exposed the gaps left by Bronze. With Alex Morgan drifting out wide to team up with Majri, gaps began to open up as Kosovare Asllani struggled to track the pacy Majri.

It took less than a minute for Lyon to get in behind City’s defense down the left flank while the second goal also came from the same position.

Asllani Has a Role to Play

It’s fair to say Swedish star Asllani hasn’t really hit the heights many might have expected of her when she signed for City last year, but she’s been a regular go-to player for Nick Cushing during their opening European campaign.

Left out of the squad altogether against Liverpool, it was no surprise to see Asllani had been rested and readied for a starting spot on Saturday. Her tricky footwork and slower style suits European football and Asllani’s clever run in behind Lyon’s defense brought City their equalizer.

Asllani has shown her qualities in spurts in Manchester but we won’t see how good she can really be without a sustained run of games domestically.

There was a big discussion about who might start for Manchester City up top with Jane Ross struggling for form as 2017 got under way. With Georgia Stanway being used as No. 9 but unlikely to start against such opposition, Cushing turned to Toni Duggan to lead the line, flanked by Melissa Lawley and Asllani.

Duggan ran the line well and as always put in one hell of a shift before being replaced by Stanway late in the game. The teenager’s pace instantly gave Lyon issues and she could have scored herself if not for a heavy touch when running in on goal.

But with Ross struggling to penetrate defenses and Duggan preferred out on the left by Cushing, bringing in a new, alternate, attacking option must be high on the gaffer’s wish list come the summer.

Whether Lyon planned to cause such chaos in City’s defense in the way they did will remain unknown but the issues down the right-hand side with Bronze and Asllani opened up a world of possibilities for right wing back Jessica Houara.

As City went ultra-narrow in the middle and allowed Steph Houghton to drift out to help Bronze, left back Demi Stokes was often caught inside and Lawley unable to track the tricky Houara. The France international was in acres of space out on the right-hand side regularly during the first half, and that space did eventually punish City in the second half.

But Lyon Can be Got At

It was almost a shock when Manchester City recovered so swiftly from an early blow to equalize, mainly because it was so easy. Keira Walsh’s interception when Lyon were high up the field caught the holders out completely, and Duggan’s inch-perfect through ball for Asllani couldn’t be stopped even by the best of defenders.

City’s late changes brought more joy: Stanway’s pace caused issues while Izzy Christiansen’s cross was headed agonizingly wide by Jill Scott. With a 3-1 deficit, it will take a minor miracle to turn the score around next week, but City can take positives from the way they created their chances.