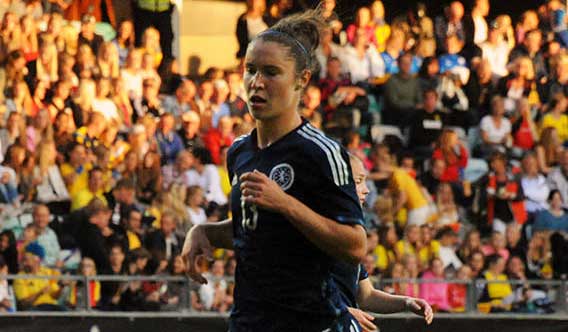 Ahead of their first major competition as a nation in women’s football, Scotland got their Cyprus Cup off to the best possible start on Wednesday with a 3-2 win over New Zealand in Larnaca.

It has put Anna Signeul’s side in pole position for a spot in next week’s final — potentially against North Korea — but first the Swede must prepare her team for a test against South Korea on Thursday afternoon.

An illness kept a couple of key players out of Tuesday’s match but Scotland are near full strength for tomorrow’s test and Signeul is looking forward to a different challenge from the one New Zealand offered on Tuesday.

“That’s what is so interesting about this group,” said the Scotland boss, who will also face fellow Euro 2017 side Austria on Monday. “We are playing three teams with completely different styles of football and we need to be prepared for that.

“That’s what we want to improve on, our defensive play was good and we stood up physically against New Zealand but on Thursday we need to show we can cope with players who play one- or two-touch, a team similar to the challenge Spain will offer us.”

Indeed, South Korea may be the closest Scotland get to working out what challenge second seeds Spain will offer in July in a match that could decide who goes through to the knockout round if England go through as expected.

Signeul added: “Spain play a little bit different but the types of players are quite similar, it’s just great for us to be here and get these four games.

“It’s invaluable experience for us and we have players who haven’t played against this kind of opposition before. The more they are exposed to these challenges the better we will become as a team. Physically, I’m very pleased with how the players look; I do think we’re starting to get there in terms of our endurance and physique but also in being quick, quick play, and our positional awareness is improving too.

Thursday’s game could also be a big occasion for Manchester City striker Jane Ross who will become the latest member of the Tartan Army to join the “100 Club” should she make an appearance against South Korea.

Thanks to her strike against New Zealand, Ross also sits just two goals off 50 for the national team but the striker isn’t getting too ahead of herself just yet.

“We don’t know the team as of yet for tomorrow,” said Ross. “But obviously it will be a huge achievement and a huge honor for me, touch wood, to reach that milestone sooner rather than later.”

Since joining Manchester City last winter, Ross has shown herself to be capable of scoring against the best opposition and her volley against New Zealand only emphasized the fact she will be a challenge for any defense she comes up against in the summer.

And the 27-year-old sees the benefits of coming up against top sides like South Korea as Scotland prepare for their major tournament bow against England.

“Challenging ourselves against different opponents and different types of opponents is really important for the Euros,” said the striker.

“Being here in Cyprus isn’t the same as a major tournament obviously but it’s playing a lot of games in a short space of time, that’s good for us and it’s good to be together as a squad in that situation too.

Looking ahead to South Korea where Scotland will face a side ranked three places above them in the FIFA rankings, Ross is expecting a different challenge and echoed her manager’s thoughts on the encounter.

“From my previous experience of playing them, they have a very different style. South Korea are very technical, they pass the ball around and yesterday we had a very physical test against New Zealand so it will be good to face a different style on Thursday.