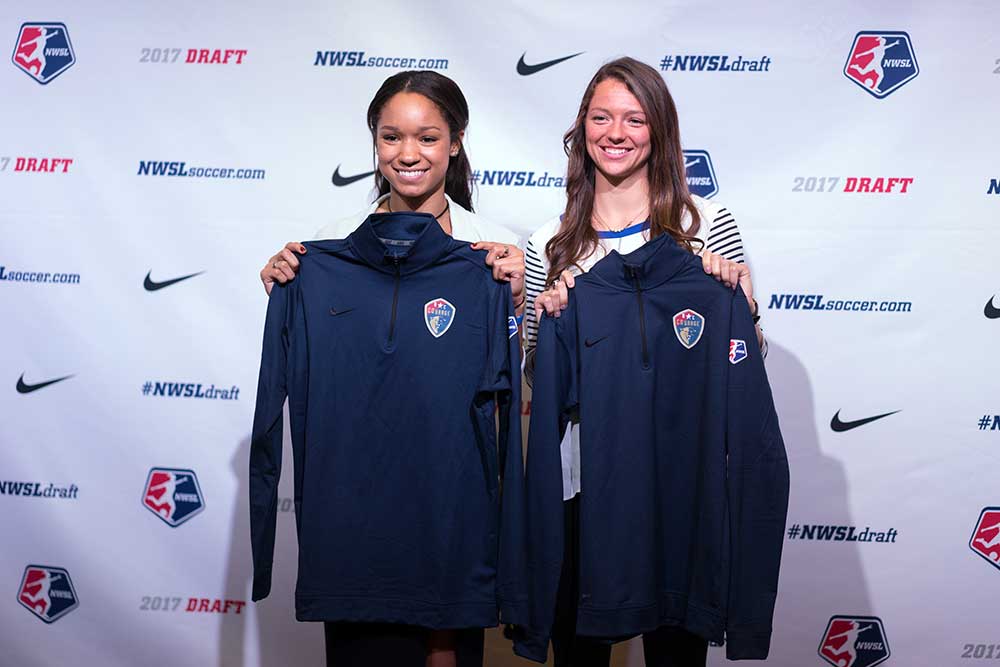 With Paul Riley present at the Courage table, you’d have to think the head coach of the Western New York Flash will be completing his move to Cary, North Carolina, in short order. As with any Paul Riley team, expect attack-minded players to come. And that’s what he got with three of his four picks. Ashley Hatch had the season of her life this past fall for BYU with 19 goals and a call-up to the senior U.S. Women’s National Team to boot. Her collegiate career was an on-and-off experience in which her freshman and junior seasons didn’t see a lot of goal production (six goals and four goals, respectively) but her sophomore season was just as good as her senior campaign with 18 tallies along with six assists. She is a taller forward and the one thing the Courage could use is depth at the target striker position behind Jessica McDonald. Unlike past years, the WCC hasn’t been the most physically imposing conference but with a little USWNT seasoning under her, Hatch will have an easier transition to the pro game.

UCLA’s Darian Jenkins is a long-term project right now because of a leg injury suffered back in October but if Riley is willing to wait for her to fully recover, Jenkins will fit right into his system. Jenkins has plenty of experience at the youth international level and was one of the fastest players in the college game. Adding her as depth will be a big plus as will adding Jaycie Johnson. The former Cornhusker is bit more of a bruising forward but has a quality touch on the ball and possesses similar strength traits to McDonald.

Picking up Claire Wagner at No. 20 was a super selection, however, and while Hatch has a heralded career, Wagner might be the best of the bunch here. She is as composed as you’d want a defender to be on the ball and can break down opposing forwards and midfielders with good passing out of the back. Wagner was a big reason why Clemson was so strong in the back during her four years there and with a short move from South Carolina to North Carolina on the way, she will have little issue adjusting to life with the Courage.

It’s tough to add any big, impactful pieces to a defending championship team, no doubt about that. Riley will have to find something new within this group because now with a full offseason of scouting, other NWSL coaches will have devised a game plan to try to stifle the highest scoring team from the 2016 season. These players are a good start to where they want to go. With the relocation process complete, the team gets a chance to re-establish its identity from what they were as the Flash, and with one or two more moves before the season comes around, the Courage will remain a playoff contender.