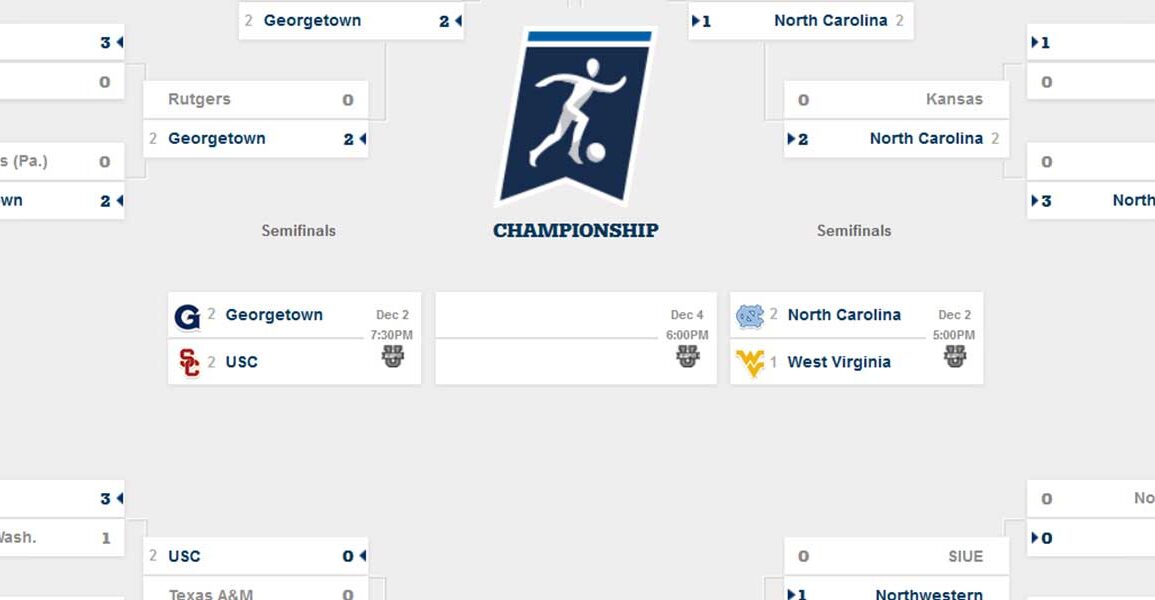 It’s College Cup Weekend. As we turn our sights on San Jose, four teams will have the chance to hoist the NCAA Championship trophy on Sunday but will have to get through one last grueling weekend of play. Our Game Magazine‘s college editors Rachael Caldwell, JJ Duke, Ruth Moore, and Brandi Ortega have been neck-deep in covering the 2016 NCAA Women’s Soccer all season long and they get one last chance to weigh in on the NCAA season.

Played at Avaya Stadium in San Jose, California, on Friday, December 2. All matches aired on ESPNU.

These four teams have reached the last weekend of the season. Here’s why and what gives each team an advantage.

ADAPTATION. As I mentioned last week, North Carolina has had to adapt all season due to players missing time and starters being unavailable. One key piece of adapting to the different challenges they’ve faced all season obviously lies in the insane knowledge and experience that Anson Dorrance has over most other collegiate coaches, men’s or women’s. The other key to this is the talent North Carolina has off the bench, which has been the cog that’s moved the Heels from round to round in this tournament. There are 18 players on the Tar Heel roster with at least 500 minutes played this season, a year in which Dorrance has shown no fear in the liberal use of substitutes. Those subs have showed up, especially in the past two rounds. Both 1-0 victories over Clemson and South Carolina involved goals from substitutes, Dorian Bailey and Madison Schultz, respectively. When you have depth on the bench you can insert players into the game who can change the situation on the field immediately into one that favors your squad. Plus, when it comes to the insane amount of minutes and travel players log during tournament time, any amount of rest you can afford your starters is a benefit. Should North Carolina win it will be because they adapt to the match that plays out in front of them and will outlast their opponents.

Attack. It’s all about the attack for West Virginia. After a fairly easy spate of early rounders, the Mountaineers faced a pesky Ohio State team and went to penalties against UCLA. It wasn’t necessarily a pretty win against Duke and West Virginia was on the back foot for most of the second half. The defense is excellent and what else can be said about Kadeisha Buchanan? Not much. So it will be up to West Virginia to be more efficient with the chances they create in front of goal if they want to lift the trophy. Defense is on lock down with Buchanan and the rest of the back line. And the back line will need to be alert and disciplined against a North Carolina team with depth and battle tested by this season. Scoring first will be key for the Mountaineers. Of concern is tired legs after extra time and penalties against Ohio State and UCLA, respectively, and after holding off a furious second half from Duke.

Georgetown is 7-0 against its NCAA Tournament opponents and carry 17 shutouts in a 20-2-3 record this year. The Hoyas were a team on the rise throughout the season, with stingy defense an important aspect of their success. When it was on, they were on; when it was off, they lost to Stanford, 0-3, and DePaul, 1-4. At the other end of the field, Georgetown set school records for wins and goals scored with senior leadership and MAC Hermann Trophy Semifinalist Rachel Corboz playing a big part in keeping their points up. The Hoyas secured their first Big East Conference Championship en route to the No. 2 seed in Stanford’s quadrant and defended their turf remarkably well to earn the semifinal berth. Maintaining the momentum of this run of shutouts/wins, continuing with a solid defensive effort, and enjoying the freedom that goes along with a fresh face in the Final Four — Georgetown could take aim at a truly stunning title win this weekend in San Jose.

Defense and timely scoring wins championships. USC has posted 15 shutouts and have allowed just 10 goals in 23 matches this season, giving them the eighth best goals against average (GAA) in the nation at 0.425. After their 1-0 win over Auburn this past weekend coming by way of an early Alex Anthony goal, they finished out their home slate with a 10-1-1 record, with all 10 wins coming via clean sheets. Now that stat is fairly meaningless coming into the College Cup as this will be played on a neutral ground, but when they are the team that is making the shortest commute to San Jose, you could say that they are basically the home team in this tournament. Scoring has been an issue for this team since the tournament began. Outside of a 3-1 win over Eastern Washington in the first round, the Trojans have found the back of the net just twice since then. They will be facing a Georgetown team that is as equally stingy defensively as they are, as the Hoyas have allowed only one goal over their last eight matches. But I think that USC are in the better half of the draw and if they advance to the Championship, they hope that North Carolina or West Virginia will be a little weary after a long trip west and what we would anticipate being a very up-and-down and physical first semifinal before playing them in the Final. USC has a real chance of taking home this Cup but will need to rely on their sturdy back line and Sammy Jo Prudhomme in net in order for them to get there.

Because it has become some sort of an annual tradition, it’s time for the editors to make their championship prediction. Our readers may have seen over the past few years that #TeamOGM strives to share the best stories out there in the women’s game while holding a high level of professionalism and journalistic integrity. When it comes to the college game… it’s a combination of that, plus a no-hold barred showdown of cynicism and sarcasm while playing to our favorites and openly hoping our almae matres go farther than everyone else — we have a little fun. With that being said, let’s make some picks.

Ruth (aka the defending champion)

Do I have to go first? No, skip this section, then come back. My teammates are right: there are some good stories and some great potential for all of these teams. (Even North Carolina?) None of us have a horse in this race, and no one is under any perceived obligation to call it for a boss’ alma mater. First-time semifinalists Georgetown and West Virginia make strong cases for themselves as contenders. Even having just one of them in the final would make for a great game of soccer. Having either of them as national champion would be an excellent way to cap off 2016 — on par with any of the perennial favorites, from conferences that are often undersold in the regular season. But this year my real interest is in a different kind of underdog, rising from the strong Pac-12 conference that shook out rather strangely this year. The USC Trojans are one of those teams that you typically wouldn’t hear me cheer for (and not just because of the earful I’d get from Brandi*). With three years under Head Coach Keidane McAlpine and dedication from four-year commits and transfers alike, the Trojans have built up to this well-deserved return to the Final Four. I’ve had them hitting the semifinals since the bracket was announced. Now, seeing their opponents — especially the lack of Stanford — I have USC taking it all. There is some seriously good senior leadership here that really ought to go out on top. If we’re lucky, we’ll get to see some clutch Morgan Andrews heroics along the way.

Help me, children. Help me. USC is going to win the College Cup. As probably the most well-rounded team of the four, the Trojans boast experience and a deep bench with players who can cause opposing teams trouble on every line. The one concern for USC is on offense. If the Trojan attack is wasteful in front of goal it might mean an early exit. But it just feels like it’s USC’s year. And as I’ve said before, Morgan Andrews has been rejuvenated since coming the Southern California so I expect her to come up big time for the Trojans.

No SEC squad made the College Cup (honestly, should we even be surprised at this point), so that means I have no rooting interest here. I get to go in completely uninhibited by my southern bias and as a totally relaxed observer. To me, nothing would be more fun than to see the first-time party crashers in Georgetown and West Virginia battling to take home their first NCAA women’s soccer championship. Georgetown is a seriously fun team to watch, with talented attacking options in Rachel Corboz and Grace Damaska. They really make soccer look beautiful. Meanwhile, West Virginia has relied on smothering defense with clutch offensive contributions to advance. Having Olympians on your squad is generally going to give you an advantage in any collegiate sport championship, so I’m going with the Mountaineers as the 2016 champs. It’ll cap off an unprecedented year for Kadeisha Buchanan and Ashley Lawrence before they head to the professional ranks.

Often enough, this is the part of the season where I fail miserably. I will gladly name you the teams who will give us an early round upset but I am utterly clueless on predicting a champion. So it’s time for me to stop using my old formula of watching trends and going with my gut. Instead, I’m going to take a line from Kevin Costner in Bull Durham and use it toward  my pick: “stop thinking, it will only hurt the ball club.” (In this case, the ball club is me.) So here we go: West Virginia takes down North Carolina in semifinal one and USC wins a nail biter over Georgetown right after that. While it would be nice to see Kadeisha Buchanan and Ashley Lawrence bookend their 2016 by bringing the Cup back to Morgantown after winning bronze in Rio, it’s not going to happen. Fight On Trojans… and Morgan Andrews scores the winner.