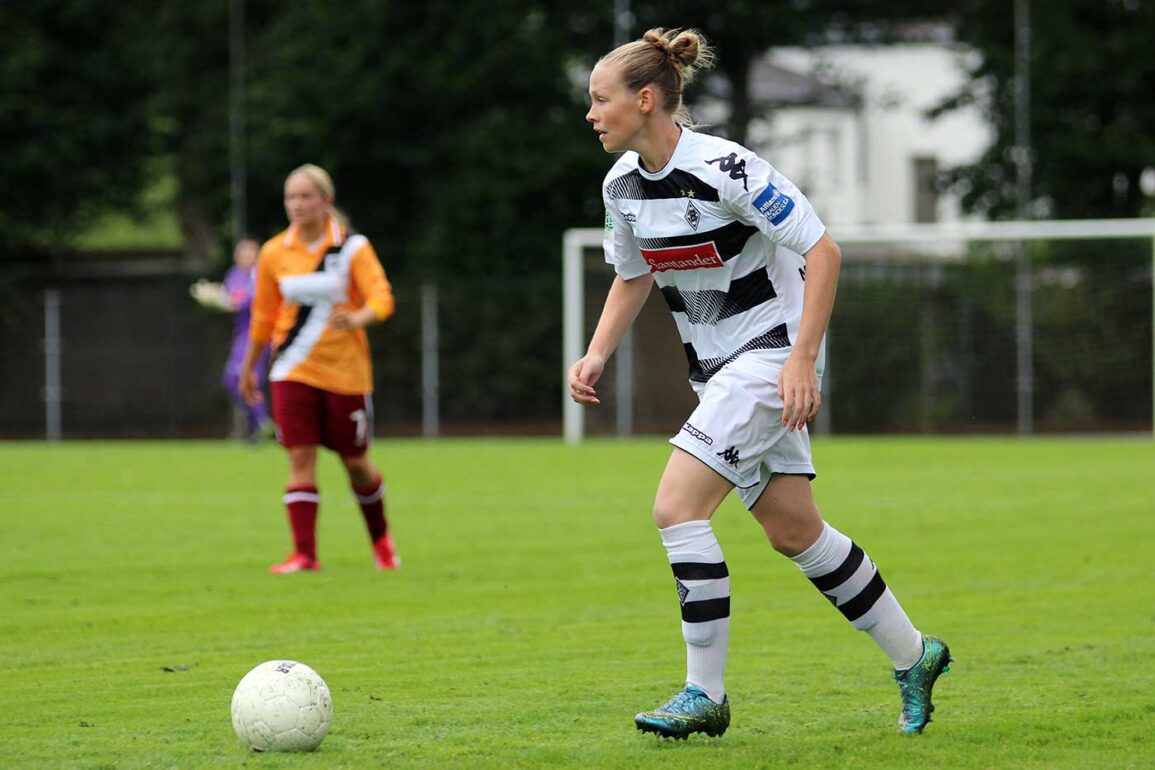 The Frauen-Bundesliga takes a break this weekend because of international fixtures so it’s a perfect time to catch up on what happened on gameday 5.

It was first versus second. The top game of gameday 5 but a straight red card in the 11th minute dampened the expectations pretty quick. SGS Essen’s Vanessa Martini was sent off after taking out Potsdam forward Svenja Huth near the penalty line. The following free kick was an absolute beauty of a goal: Australian international Elise Kellond-Knight smashed the ball into the net with a lovely curve to give Matthias Rudolph’s team the lead. There was absolutely no chance for German keeper Lisa Weiß to save that. The red card influenced the whole Essen team and resulted in weak pressing. Daniel Kraus’ team wasn’t as enthusiastic in 1-v-1 duels as they wanted to be. Potsdam used Essen’s weak phase in which they tried to organize their buildup and played very aggressive football. They still failed to take advantage of it though and final passes were missing. Potsdam had chances to double their lead before halftime but couldn’t. Still, give credit to Essen, who managed to fight back and even create a few chances themselves. Huth sealed the deal in the second half and her outstanding performance was rewarded with a goal in the 68th minute.

I’m sure things would’ve been a little more difficult for the Berlin team if it wasn’t for the red card. Essen also had to miss out on their creative mind in midfield, Linda Dallmann. Sara Doorsoun-Khajeh couldn’t really bring in her ideas because she was put in defense after the red card. Essen needed someone just as fast to take care of the forwards — not an easy task. They showed courage, though, and that’s what matters the most. Essen will, without a doubt, play a good role in the Frauen-Bundesliga this season. What I’ve seen so far is good and always leaves me looking forward to the next game. Potsdam, on the other hand, now lead the table with two points in advance. Who would’ve thought that would happen when the season started?

The first three points of the season, what a relief for Thomas Obliers’ team! The victory comes as a surprise if you look at all the injured Leverkusen players who couldn’t compete: Turid Knaak, Lena Schrum, Rebecca Knaak, Marina Hegering, Melissa Friedrich, Ramona Petzelberger, and Rachel Rinast. That’s one hell of a list. And it showed — it wasn’t the prettiest game to look at. It was a very hectic fixture in which both sides had quite a few chances. But the win over Duisburg was overshadowed by an injury. German defender Nina Ehegötz tore her ACL during the game and will be out for more than six months. A huge bummer for the club and the young talent, who truly enriched Bayer’s play. Merle Barth scored the winning goal for Leverkusen in the 22th minute. The goal is also the first goal Bayer has scored in the ongoing Frauen-Bundesliga season.

We all remember watching the Olympics and being outraged after that nasty tackle on German midfielder Simone Laudehr. She had just returned from a long-term injury before the tournament began and would now be out for months again. But the long period of suffering is finally over, hopefully. Laudehr made her first official start in the game against SC Sand and it was one to remember as she was the one who scored the winning goal for her new club in the 43th minute. She replaced Melanie Leupolz who is still dealing with a nasty cold. It’s been 12 years since Laudehr scored a goal for Bayern! People who are familiar with her know that she used to play for the current reigning Frauen-Bundesliga champions from 2003 until 2004. It was a special duel for Bayern, who were eliminated by SC Sand in the DFB Pokal last year. Sand’s defensive style of play didn’t make it easy for Bayern, though, and it was a hard-fought battle with slight advantages for the guests. A notable change: Sand head coach Colin Bell put Diane Caldwell up front. The Irish international usually plays as defender but is also known for her strong headers. Even with the tactical change in the last half of the game, however, Sand couldn’t overcome Bayern.

Hoffenheim were close to a sensational win and almost forced Potsdam chaser Wolfsburg to drop points in Sinsheim. It was the German international Kristin Demann who surprisingly brought the lead for Hoffenheim in the 19th minute with the first corner. Hoffenheim’s defensive work in the first half against “Die Wölfinnen” was really good and Wolfsburg weren’t a real threat until the 44th minute when a cross by Lena Goeßling reached Nilla Fischer. The captain marked the important equalizer. Wolfsburg put more pressure on Hoffenheim in the second half but couldn’t make the most of their chances — the usual problem. A lucky punch decided the game. Alex Popp scored the winning goal in the 89th minute. Never stop defending against such an offensive Wolfsburg team: Popp is known as a big-time player and is always there to push her teammates until the very end, no matter what the score is. She is crucial in front of the goal and the forward has proven that more than once. If you don’t defend against her in the penalty area, it’s guaranteed that she will net one in. It was an important three points for Wolfsburg who are now second in the table. It was a good and strong performance by Hoffenheim though!

Premiere in the Frauen-Bundesliga: it was the first time both teams faced each other. The promoted Borussia Mönchengladbach didn’t stand a chance against Freiburg though; the guests didn’t miss on anything. Hasret Kayikci (13′), Giulia Gwinn (48′) and a brace by Sandra Starke (78′, 83′) helped Freiburg climb up in the table to third place. Gladbach couldn’t even focus on attacking as Freiburg forced them to defend right away by putting constant pressure on them. Freiburg had the chances to increase the lead in the first half but failed to do so. However, they made up for their missed chances in the second half. Gladbach are still without a point this season. You could say, the more games they lose, the more dangerous they become. But I think it’s time to question if the roster is able to compete at this high level and challenge the Frauen-Bundesliga teams. It’s a fantastic experience for all players involved and Gladbach do have tons of great young talent, but how long does it take until the team reaches its full potential?

Facing Frankfurt after you’ve lost four games in a row certainly isn’t an easy task but Christian Franz-Pohlmann’s team put up a great fight against a Frankfurt side that had problems with Jena’s aggressive style of play. Jena’s Julia Arnold marked the lead for the guests in the 51st minute. What followed was a strong phase by Jena with plenty of good attacks and chances. But things change in football and sometimes they change quickly; instead of Jena increasing the lead, Frankfurt equalized through Mandy Islacker after 64 minutes. A shocker for Jena. Dutch international Jackie Groenen ruined Jena’s possible chances of partial success. The midfielder collected her first goal of the season after a great solo effort. Groenen played a very strong game in general and seems to become more and more important for the club — well deserved! Overall, it was a great and promising comeback for Frankfurt who caught up after being down, 0-1.