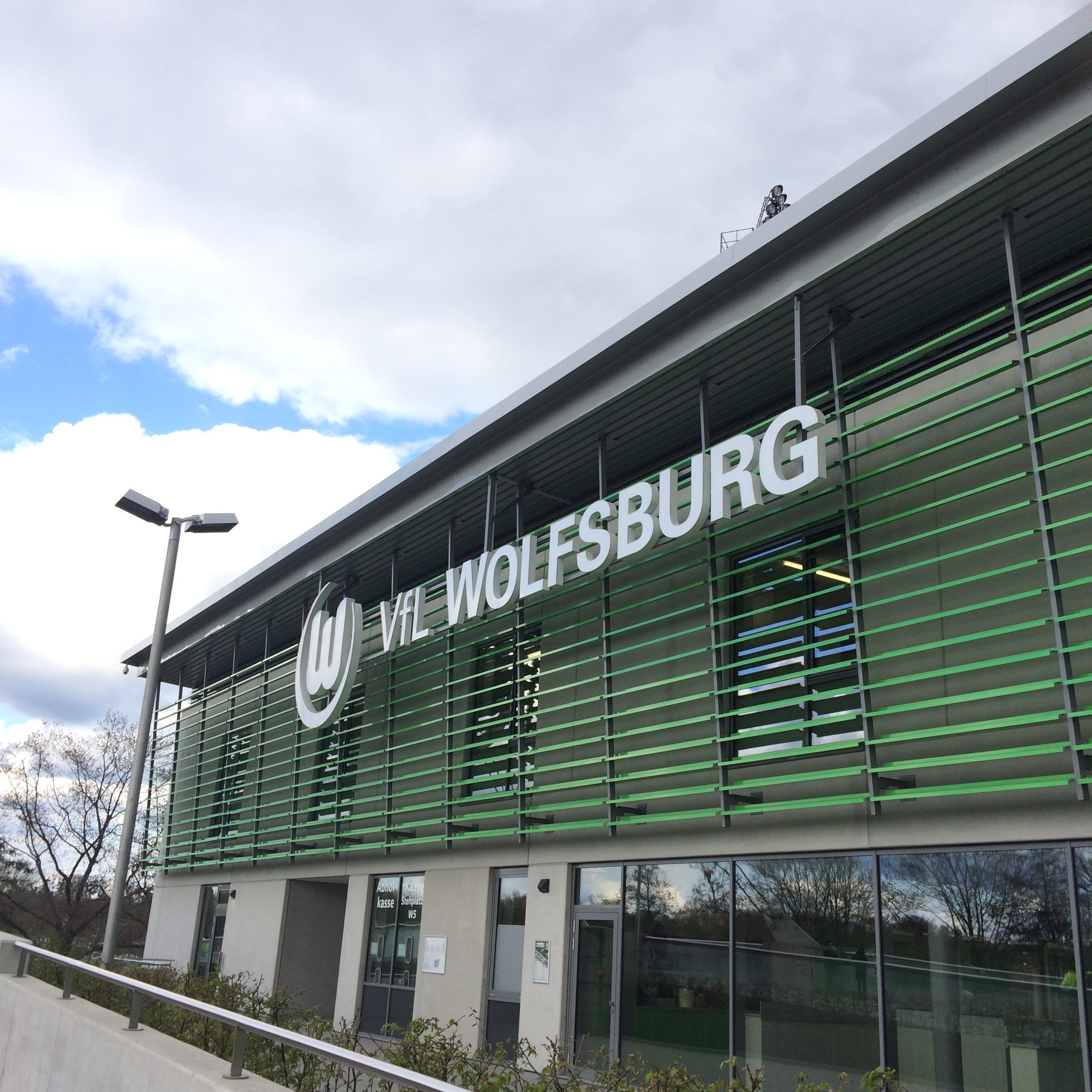 A lot of pressure for Bayern Munich and VfL Wolfsburg, who both drew on the first “Spieltag” while Turbine Potsdam welcomed rival FFC Frankfurt at the Karl-Lieberknecht Stadion — the ultimate classic fixture in the Frauen-Bundesliga. Let‘s wrap up the second gameday, with focus and some specific insight on Wolfsburg’s style of play since I was there in person to watch and analyze it live. The Allianz Frauen-Bundesliga returns on September 25 after the international break.

There was no excuse this time: Wolfsburg had to win after only collecting one point against SC Sand last week. And Leverkusen certainly wasn’t an easy task. Head coach Ralf Kellermann expected them to play very defensively and reacted by changing his tactics to 3-5-2. Lena Goeßling was put in defense. Isabel Kerschowski acted as left back and switched between defending and attacking. Goeßling in defense is something I personally don’t agree with — it’s wasted potential. And it showed: a lot of wrong passes by Goeßling in the first half. You could see slight deficits.

The Wolves had quite a few chances in the first half with Anja Mittag and Caroline Hansen missing the biggest ones. But I also have to give credit to Leverkusen, who not only defended well but were also brave enough to try and attack, something I’ve been missing these past few years. I saw a very promising Leverkusen side in Wolfsburg while the home team seemed to lack ideas, yet again. The game was very slow at times. “Die Wölfinnen” had 10 real good minutes and that’s where they made up for the weak showing: a lovely backheel-goal by Mittag marked the 1-0 lead in the 55th minute. Ramona Bachmann made it 2-0 just two minutes later with a great solo shot.

The players who stood out the most for me on both sides: Iceland international Sara Björk Gunnarsdóttir, who had a strong home debut for VfL Wolfsburg. Her presence on the field is amazing. She’s ruthless, wins the ball really aggressively, and doesn’t shy away from a tackle. Impressive and good addition to Wolfsburg’s play. Someone as eager as her has been missing ever since Nadine Keßler retired. Swiss international Rachel Rinast  was also very present for Leverkusen. She made the runs, forward and backward, attacked, and created chances. Promising signing and Leverkusen is definitely a club that can help her develop even more.

Successful start into the new Allianz Frauen-Bundesliga season for SGS Essen, who collected their second win against TSG Hoffenheim. Lea Schüller struck again and marked the winning goal in the 68th minute. A very even game until then with Hoffenheim hitting the post twice. Hoffenheim were the more dedicated team but Essen were just incredibly efficient and held against it with some great pressing. Hoffenheim remain scoreless and without points — not the optimal result while Essen are now second in the table behind Turbine Potsdam.

What a “Klassiker” on gameday 2! Turbine Potsdam welcomed rival FFC Frankfurt. Their 51th meeting – a special game for all Frauen-Bundesliga fans. Both teams kicked off the season with impressive results last weekend. Frankfurt went into the Klassiker with quite a disadvantage though: key players Mandy Islacker, Laura Störzel, and Desirée Schumann were all unable to compete due to injuries. Coach Mark Ross, who just recently extended his contract until 2018, had to react and changed his lineup from 4-2-3-1 to 4-5-1 with Yuki Nagasato the only player up front. The goal was to keep it tight at the back and perhaps create chances. But that didn’t work out too well. It only took Potsdam three minutes to mark the 1-0 lead. Tabea Kemme took advantage of a mistake by Saskia Bartusiak, who accidentally stepped over the ball after a through pass, and forwarded it to 22-year-old Laura Lindner. The talented midfielder took the volley and smashed into the net.

Close to the end of the game Potsdam struck twice. Kemme and Svenja Huth (78′, 79′) sealed the deal against a weak Frankfurt side. Frankfurt head coach Matt Ross admitted on the club’s homepage that they had trouble compensating for the absences of Islacker and Störzel. Potsdam, on the other hand, can be very happy with the results. Two games, two wins. Head of the table. Matthias Rudolph’s handwriting is slowly but surely shaping a new, confident, and strong Potsdam team. The season is still young, but so far so good.

SC Sand with a close 1-0 win against Borussia Mönchengladbach, and the first away victory since March last year. Colin Bell trusted the same players that forced a draw against Wolfsburg last weekend. Sand had the better start and were the dangerous team with a lot of chances. But even newly promoted Gladbach had a chance thanks to Kyra Densing. The game-winning goal was scored by Laura Feiersinger, who joined Sand from Bayern Munich, in the 35th minute. It was an even game in the second half with Borussia challenging Bell’s team. SC Sand forward Silvana Chojnowski made things a little more exciting for Gladbach by getting sent off after collecting two yellow cards. A good and promising performance by Gladbach in front of 217 spectators after a devastating loss against Frankfurt last weekend. I was a bit afraid that it might have downhearted the young team but the showing against Sand was a great comeback.

Another team that keeps marching on, SC Freiburg. They welcomed newly promoted MSV Duisburg, who failed to become established once again as they faced a crucial Freiburg side. Duisburg coach Inka Grings trusted the same lineup as last week with only one rotation in midfield: defender Julia Debitzki replaced Anna-Sophie Fliege. Freiburg coach Jens Heuer let German international forward Lena Petermann start after an impressive joker role against Bayern Munich last weekend. It was a change that paid off. Freiburg’s team was literally on fire and took Duisburg by surprise. It was 2-0 after just 10 minutes! Petermann paid back the trust that and collected her first goal of the season after just six minutes, followed with a goal by Lina Magull in the ninth minute. It took Duisburg a while to recover from that.

Duisburg’s aim was to not concede a goal this fast and perhaps give the team a little confidence after the defeat against Essen. They couldn’t stand a chance against Freiburg though, who played direct and fast football. The 2-0 lead at half time was well deserved. And even in the second half only one team lead the game. It was Petermann who collected two more goals (56′, 65′) and new German international Hasret Kayikci in injury time. Good first start for Petermann, who set her standards high this season.

Some passionate defending by a strong Jena side that unfortunately didn’t get rewarded. Bayern Munich finally collected their first three points thanks to a Vivianne Miedema goal in the 68th minute. Bayern were dominant — as expected — and had quite a few chances to mark the lead earlier on in the game. But Jena’s defense was very strong, very vicious. New goalkeeper Justien Odeurs has also proven her worth with some outstanding saves. She replaced Kathrin Längert, who was injured during her warm-up. Jena head coach Christian Franz-Pohlmann was more than proud of his team after the game and gave his side a lot of credit for the amazing defending against a strong opponent.