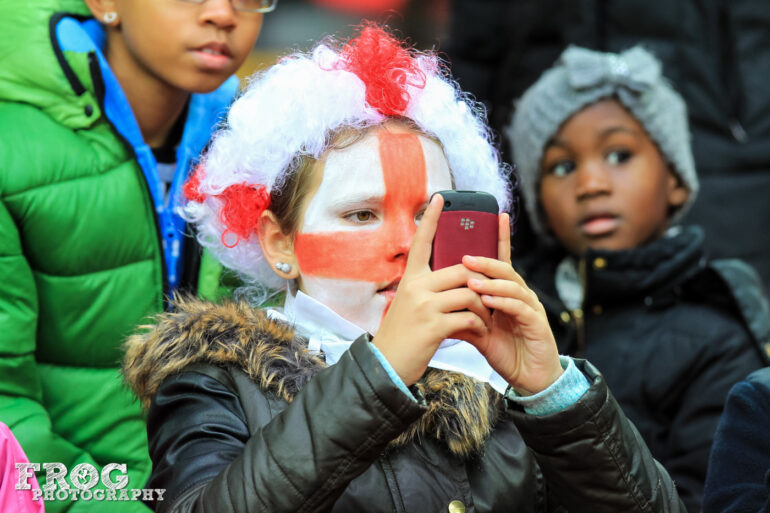 England fan during the match between England and Germany at Wembley Stadium on November 23, 2014.

England Ready for Doubleheader with Serbia

One thing became clear just five minutes into the 20-minute session the media who turned up to St. George’s Park on Tuesday afternoon got to see, England and Mark Sampson are looking for goals. Having already spoke to Fran Kirby and Gemma Davison a few days before, you could sense a bit of extra motivation among the attacking players to go out and silence a few critics.

During four quick-fire 5-a-side matches on one of the many outdoor pitches at the facility in Staffordshire, teams regularly swapped sides and pitches and wasted no time peppering Karen Bardsley, Carly Telford, Siobhan Chamberlain, and U-23 goalkeeper Lizzie Durack with shots. Jordan Nobbs was in particularly fine form, Steph Houghton was getting forward whenever possible, and even the likes of defender Laura Bassett were taking efforts on from range.

Durack, along with Hannah Blundell and Millie Bright, were training with the first team and have been most of the week. It’s not unusual, Sampson regularly brings players in to train and the players were conveniently placed for an invite while training for their own tournament. The squad should have been on a fun day out at Alton Towers on Wednesday afternoon but the famous English weather put pay to that so the squad went for a meal before some went off to spend the evening with their families.

Sadly, after speaking to several players at the WSL clubs named on the poster, they’re either very good actresses or indeed the poster was a fake and there really won’t be any WSL clubs or NWSL clubs on FIFA for the time being. Hopefully in the near future that can and will change.

Brighton in a Tricky Spot

Brighton and Hove Albion became the latest team to assure themselves of a place in the FA WSL for 2017 with a 4-2 win over Sporting Albion in the Premier League playoff final last Sunday. After a few months of difficulties behind the scenes, the team rallied themselves to put in a superb performance that will see them join FA WSL 2 next year.

The problem now is the team have no competitive games for the rest of 2016. As they’re not yet an official WSL club they’ll play no part in the Continental Cup. This is the same position Sheffield FC found themselves in last year. The biggest issue is the players are now strictly free agents, contracts ran out on June 1, and players are free to sign for other FA Women’s Premier League clubs or even clubs in the WSL should they wish.

While the majority will likely stick it out and re-sign for Brighton in the winter, it’s a problem that comes with the WPL running at a completely different time of year to the WSL. In 2015, Sheffield FC managed to hang on to their players despite plenty of inquiries from clubs above them in the pecking order. Due to their promotion, players were willing to stay and friendlies were arranged to keep the players keen and active.

Some players didn’t want nor require a break: the ever competitive Carla Ward helped out manager Zoe Johnson with the development team while first-team regular Ellie Gilliatt dropped down to play for the youth team to keep herself fit and ready. Though most of Brighton’s players will stay for the same reason Sheffield’s players did, it’s a difficult situation and players could be tempted to move depending on which clubs show an interest.