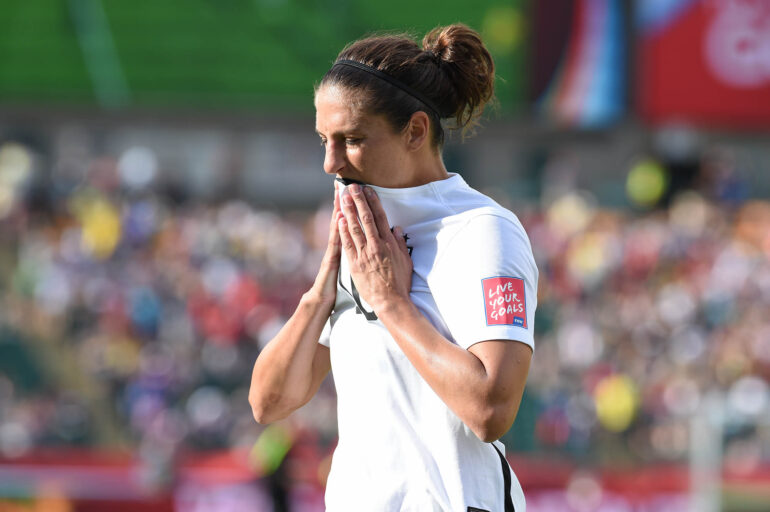 FIFA has announced the list of finalists for the 2015 FIFA Puskás Award and Carli Lloyd’s from-midfield goal during the final of the 2015 FIFA Women’s World Cup is up for the award. Lloyd’s third goal of the game — a hat trick, making her the first woman and second player to accomplish the feat in a World Cup final — is the only goal scored by a woman nominated.

Lloyd’s hat trick-clenching goal came in the 16th minute of the final between the Unites States and Japan, with the U.S. winning, 5-2, to capture a third World Cup title.

FIFA created the Puskás Award in 2009 to honor the “most beautiful” goal of the year. The first goal by a female player to make the list of 10 finalists was scored by Japan’s Kumi Yokoyama during the semifinals of the 2010 FIFA U-17 Women’s World Cup.

Heather O’Reilly was nominated in 2011 for her strike against Colombia in the group stage of the 2011 FIFA Women’s World Cup. In 2012, Olivia Jimenez’s goal from the 2012 FIFA U-20 Women’s World Cup was among the 10 finalists. In 2013, Lisa De Vanna’s bicycle kick during a National Women’s Soccer League (NWSL) match between Sky Blue FC and the Boston Breakers made it the final 10.

Stephanie Roche’s blast for Peamount United made it to the final three in 2014 and finished second in the voting.

The award is decided by fan vote. You can watch all of the nominated goals and place your vote here. The three finalists will be announced on November 30. The winner will be revealed during the FIFA Ballon d’Or Gala on January 11, 2016.