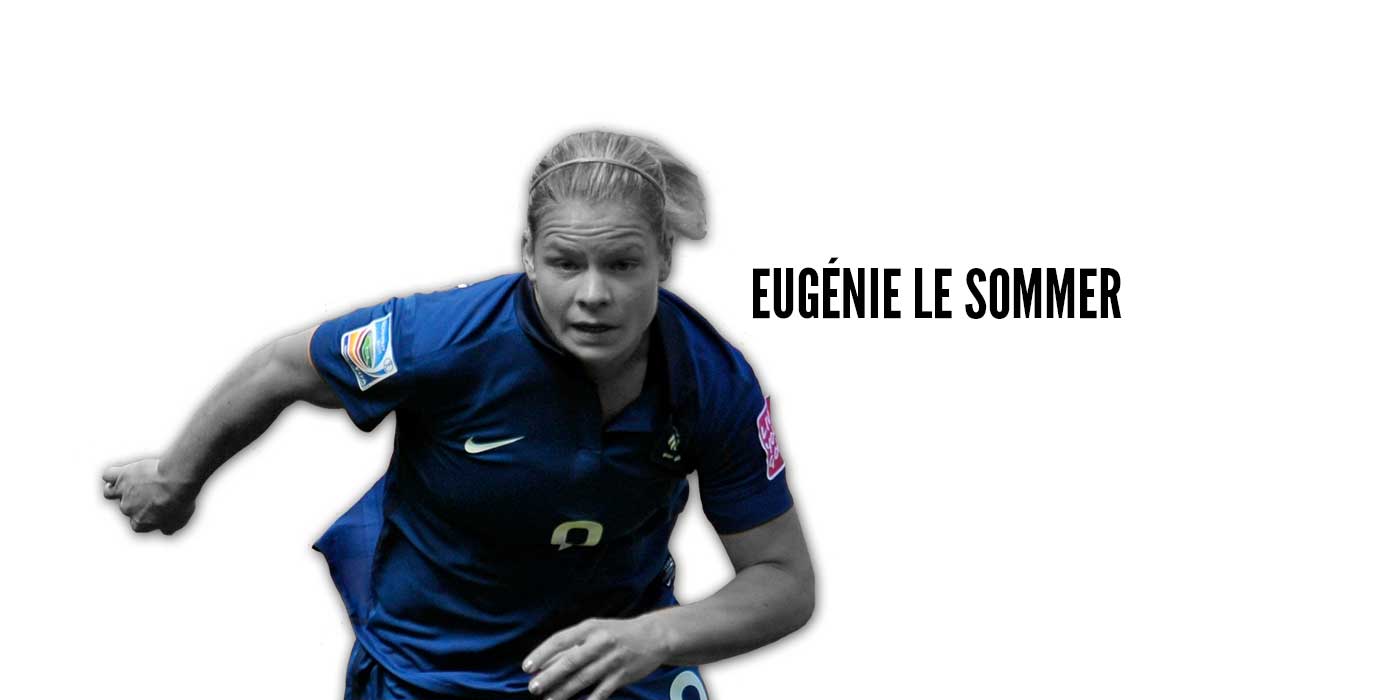 In another segment of Our Game Magazine‘s Fresh Perspectives Interviews, we chatted with French international Eugénie Le Sommer while she and the national team are in the United States for a two-game series against the U.S. Women’s National Team. The wide-ranging chat touched on her beginnings as a player to the new coach for the national team to her family.

Thank you to Stéphane Lanoue, press officer for the national team, for translating.

Eugénie Le Sommer comes from a soccer family. Mother, father, and siblings have played or still play. So sooner or later, she would start playing, too.

As it turned out, Le Sommer would start playing much sooner rather than later.

“I was very young, four-and-a-half years old, with the boys at school. I played with boys until [I was] 14 years old.”

She trained in Judo as well but soccer won out when it was time to focus and make a choice.

“I had to choose, judo or soccer, and I chose soccer. I was good in judo but …” she said and smiled as she trailed off.

As I later learned, it’s “All the time — football. Soccer, soccer, soccer” for Le Sommer.

[column size=one_half position=first ] Le Sommer started her career with Trélissac FC in southwestern France. A longer stay with AS Guermeur followed and led to a three-year stint with a larger club, FC Lorient. While there, Le Sommer was invited to attend Clairefontaine, France’s prestigious training and development center for players.

Stade Briochin followed and then Olympique Lyonnaise in 2010. She’s been there since, making more than 100 appearances for the Division 1 Féminine league titleholders.
[/column] [column size=one_half position=last ]

Le Sommer has been making appearances for her country at the youth and senior levels. A consistent selection for the U-17, U-19, and U-20 teams, she broke out at the 2008 U-20 Women’s World Cup in Chile in which France lost in the semifinals to North Korea. She won the Bronze Ball for her four-goal effort and made the tournament’s All-Star Team.

At age 19, she debuted for the senior team against the Republic of Ireland on February 12, 2009. Her first goal would come during the 2009 Cyprus Cup against Scotland in March 2009.

Representing her country, putting on the jersey, gives Le Sommer a sense of pride and is something she hopes to continue.

“A lot of pride [putting on the French jersey]. I’m very happy and I hope it will go a very long time. And now I want to win something with the national team.”

That ambition, to win something with the national team, will take progress for France. After a quarterfinals exit in the 2013 UEFA Women’s Euro and fourth-place finishes at the 2011 Women’s World Cup and 2012 Summer Olympics in London, France made a coaching change.

Philippe Bergeroo, former national team player, was tapped to help guide the team in its efforts to win a major competition.

So far, Le Sommer has seen the professionalism Bergeroo has brought over from his work on the men’s side.

“For the team, it’s good because he’s professional and he comes from the men’s [side] so it’s good for us […] he has put into the selection a lot of professional stuff,” she said. “He’s been a head coach at Paris Saint-Germain and he was assistant coach to Jacque when France won the World Cup [1998]. So it’s good for us.”

One way to measure progress is to test the team against strong opponents, which France has been doing. Prior to the two-game series against the United States, France played Brazil to a draw in French Guiana.

Le Sommer has been to the United States before on holiday (New York, Miami, and California) and she likes it.

“I like the country because it’s big and people are cool and [I like] the way people think. I would like to learn English later,” she said. (She’s well on her way to learning English and did well answering in English several times.)

But this trip isn’t for holiday purposes. Against the United States, Le Sommer expects a physical match up.

“From the U.S. team, I think it will be very hard physically because American players are strong,” Le Sommer said as she struck a strongman pose and laughed.

At the 2011 Women’s World Cup in Germany, France advanced to the semifinals before falling to the United States. The team’s semifinal run sparked interest from fans and media in France, which Le Sommer has noticed.

“[From] the TV, media and people in general. Since World Cup, the people are interested in women’s soccer and they know the players also,” Le Sommer said.

“We can see the little girls play football. That was not the case before and we can see little girls interested in clubs like Lyon or the French team and watch our games and it’s good.”

To continue to help grow the game in France, Le Sommer believes results are key.

“I think we have to make results on the World Cup, maybe win. We need a result to [keep] this interest going. And if the results are going down, I don’t think media will show interest in women’s soccer as much as now, in my opinion.”

“Quick,” and then laughter.

I had asked Le Sommer to describe her playing style. She’s adept in the creative attacking role as well as a second striker.

Standing 5’3″, Le Sommer is often one of the smaller players on the field and she has adapted her playing style to fit her physique.

“I’m fast and technical. I’m small. Yes, I’m small player so — I am not physically that strong as the others so I have to adapt,” she explained. “With my feet, I’m very quick.”

With so many league games and then games for the national team, I asked Le Sommer how she relaxed.

“Never!” she laughed. “Can’t. Only holidays. Because I watch all the time — the men’s Champions League, men’s club. It’s not easy for me to get away from soccer.”

It’s a habit that started young and included watching an older brother play.

“All the time,” she said about watching soccer, “watching TV or matches. My brother played football also. I watched him all the time. All the time — Football. Soccer, soccer, soccer.”

That soccer family Le Sommer comes from is large, numbering nine children. She’s in the middle. It’s a supportive family, one that’s traveled to support her from her time in the reserves to major competitions.

“My mother played soccer a long time ago. My father a little also and two brothers played and one now and two sisters. We are nine children,” she explained.

“It’s a family very involved into soccer. They follow me […] they come to the games.”