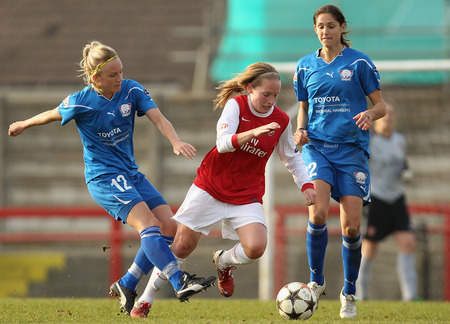 Kim Little has accomplished so much in such a short period of time. The 20-year-old Scottish midfielder joined Arsenal in December 2007, and in her first two seasons with the North London club (2008–2009, 2009–2010), Little scored a total of 71 goals in 78 matches, including 47 last year in 36 appearances. She earned Player of the Year honors last season and has been a part of Arsenal teams that have won two Premier League titles and one FA Cup. Little is also a mainstay on the Scottish Women’s National Team and scored the game-winner in Scotland’s Cyprus Cup win over England earlier this year. We had a chance to catch up with Little this weekend.

Our Game Magazine: First, talk about what it’s like playing in the FA Women’s Super League? How is the competition? How is it different from the Premier League?

Kim Little: The new league is quite different from the Premier League. It’s obviously in the summer now, so most of the games are played in nice weather, so that’s much better to play in and watch. The games we have played so far have been much more competitive and closer than in the previous league, so all teams have improved a lot in both fitness level and standard. In terms of the crowds, they have been substantially bigger than the other league with more than three times more people coming to our home games than before, with around 600/700 each game.

OGM: When you arrived at Arsenal, you made an instant impact. You came onto the team (one year prior to) Kelly Smith going to play in Women’s Professional Soccer. Did you feel any pressure to be the next Kelly Smith when she left?

Little: Not really. I didn’t think of it like that at all. I think a lot of players left at that time, and a lot of new players came in and credit to the team for adapting and continuing to win trophies despite losing great players like Kelly Smith, Alex Scott, and Karen Carney.

OGM: You’ve played for Scotland’s senior team for five years now. Talk about what it was like when you got your first call-up and played in your first international match.

Little: I was really young. I think I was 16 at the time, and I got called up to a training camp, then selected to go to Cyprus for two games. I came on in the first game against Japan. I can’t really remember much about the game, but I was very proud to be capped at senior level for my country at a such a young age.

Little: I think as part of the team, the most memorable season was winning the treble in the 2008–09 season. After losing several players to the American league halfway through the season, we still managed to win the FA cup and the league on the last day of the season against Everton. Also in that season, I scored in the FA Cup final in front of 25,000 people. That was quite special. I have also been lucky enough to play twice at the Emirates Stadium, where I have scored on both occasions, so they were also both great occasions, too.

OGM: How much work does it take to become the best player in the Premier League? What are some of the things you do to make yourself a better player?

Little: I think it helped when I was younger – I always played football with the boys and with my dad and younger brother and really enjoyed playing. The enjoyment motivates you and makes you want to work on parts of your game that will make you better, like fitness, shooting. etc. I think that helped me a lot.

OGM: What are some of the things you do to help the younger players on the squad?

Little: I still see myself as a young one, and we have a lot of experienced players at the club who have won everything in club football, so I think the young ones learn a lot of them and the way they play, and I know I have.

OGM: What’s the best advice you’ve ever been given?

Little: I think just to always enjoy, work hard and train as you play.

OGM: What are your goals, and where do you want your career to go from here?

Little: I just want to keep playing and enjoying it and to win as many things as possible. Also, a big goal for me and for the Scotland team is to reach a finals tournament.