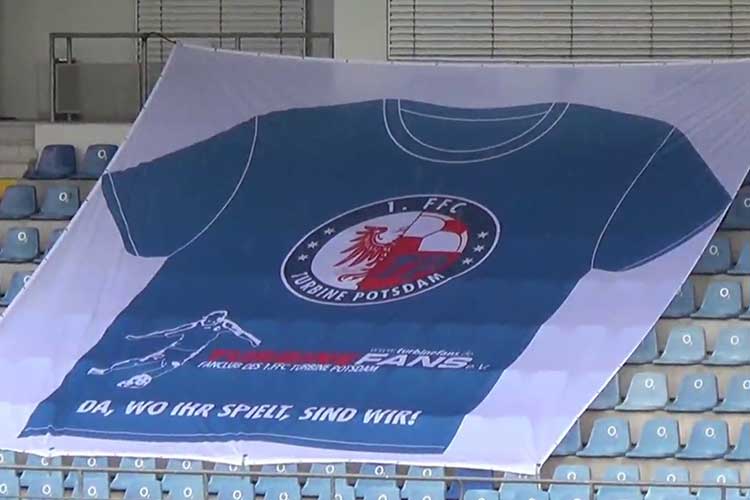 Only one point against SC Freiburg: that’s not how the current reigning Frauen-Bundesliga champions wanted to start the new season in front of their own fans. “Die Bayern” were dominant throughout the whole game with four Olympic gold medalists on the field, but failed to make use of their chances. Especially Gina Lewandowski, who had three good chances but couldn’t manage to score. No goals in the first half, but the second one started with an advantage for Bayern: Sara Däbritz was brought down by Giulia Gwinn in the penalty area and then it was Melanie Behringer who marked the lead for her team in the 50th minute after converting the penalty. SC Freiburg put up a great fight and knew how to handle Bayern’s play — new German international Hasret Kayikci celebrated the equalizer for Freiburg after a nice header in the 79th minute after Leonie Maier failed to control the forward in that situation. The strong Freiburg side would have been able to take the lead, but a deserved penalty wasn’t given to them, but luckily for Bayern!

One point against Bayern Munich is a massive result for Freiburg and definitely a sign they are indeed ready to attack the bigger teams in the Frauen-Bundesliga. Bayern, on the other hand, failed to make a statement and only have themselves to blame.

Also lucky for Bayern is that title contender VfL Wolfsburg didn’t manage to win its first game as well. “Die Wölfinnen” started their campaign away against SC Sand. SC Sand have a strong and competitive team and faced Wolfsburg a couple of times last season and proved they can tame the Wolves. Sand didn’t have a lot of promising chances as they failed to make it through to Wolfsburg’s penalty area. Wolfsburg, on the other hand, simply weren’t efficient and creative enough, which is surprising when you look at their massive roster and the individual players they have. Ramona Bachmann, Alexandra Popp, and even Anja Mittag had good chances but couldn’t overcome Sand keeper Carina Schlüter. After analyzing Wolfsburg’s play in detail, Colin Bell’s team put up some fantastic resistance in front of 1,110 spectators. His game plan worked.

Great confidence boost for FFC Frankfurt, who gave their fans more than one chance to celebrate. Mandy Islacker (3), Ana-Maria Crnogorčević (2), Sophie Schmidt, Marith Prießen, and Lise Munk all marked their names on the score sheet. A rough start for Gladbach, who were down 3-0 after just 17 minutes. But that‘s the bitter reality of the Frauen-Bundesliga. Now it will be interesting to see if the newcomers manage to adjust to the high level in the upcoming fixtures. Frankfurt were ruthless and took advantage of all of the little mistakes. What’s bad for Gladbach is good for Frankfurt: scoring eight goals is not just great for the fans and team, but also for the goal differential in the table. Let’s not overemphasize this victory though.

Both clubs have faced each other six times so far with Turbine Potsdam always claiming the upper-hand. And Hoffenheim’s stats won’t improve as they lost their seventh clash fair and clear. It was a good showing by Turbine Potsdam and new coach Matthias Rudolph. A brace by Tabea Kemme and one goal by Felicitas Rauch earned them their first well-deserved three points of the new season. A harmless Hoffenheim side had no chance against Potsdam, who dominated the game and put a lot of pressure on Hoffenheim’s defense. A new era starts after Bernd Schröder’s departure and it did with some notable and promising changes: As we mentioned in the season preview, Rudolph indeed let a four-back defensive line play. Tabea Kemme, who usually plays as defender, was put up front alongside Svenja Huth, a change that definitely paid off considering she scored two important goals. Also, former German international Bianca Schmidt and Johanna Elsig, both out for a very long time due to injuries, made their comebacks for Potsdam.

A pacy game with a clear result, even tough Duisburg played a good first 30 minutes. They seemed feisty and fearless but eventually fell short to a well-practiced Essen side. Lea Schüller and new German international Linda Dallmann played a great game and marked the lead for SGS Essen in the 46th minute. Dallmann’s cross reached Schüller, who placed the ball in the net after a beautiful bicycle kick, most likely a contender for goal of the month/season! Dallmann rewarded her great performance and expanded the lead in the 50th minute. Duisburg couldn’t keep up with Essen anymore and had a lot of gaps in defense and midfield. Jacqueline Klasen’s goal in the 63th minute decided the game. A bummer for Duisburg, who went into the Frauen-Bundesliga undefeated. But that’s the bitter reality of the Frauen-Bundesliga, one of the strongest leagues in the world.

A lot of effort that didn’t get rewarded. Bayer Leverkusen tried and had the chances to score, but failed. The usual problem. Jena, on the other side, were more efficient, especially Lucie Voňková, whose first goal is another goal of the month/season contender. One simple shot from 30 meters overcame Leverkusen keeper Anna Klink and headed straight into the net. The Czech international collected her second goal in the 65th minute made sure that the guests took three points back with them to Jena. Jena head coach Christian Franz-Pohlmann remained critical though and admitted that his side made a lot of mistakes though. The hard work continues, for both teams.