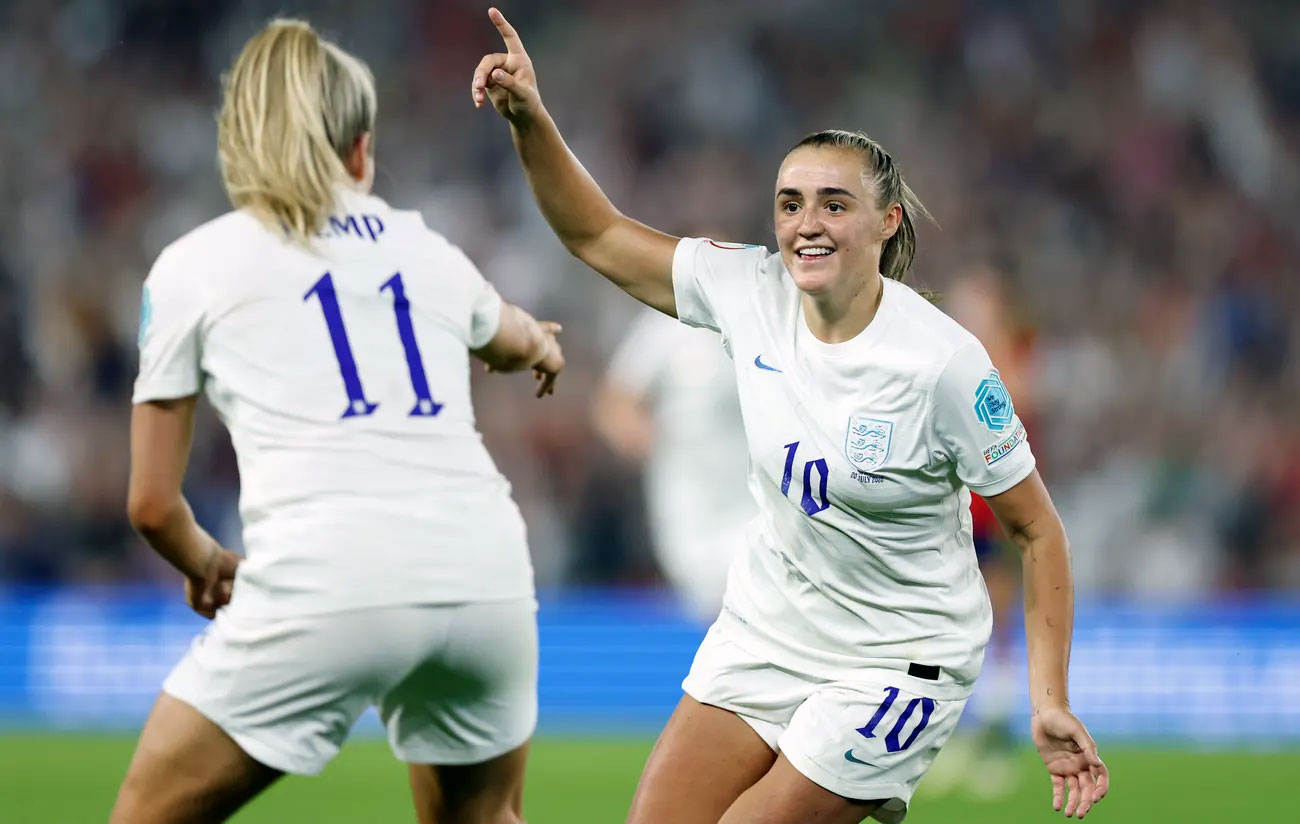 Richard Laverty·
EnglandEuros
·July 30, 2022·6 min read
Share
We need to stop talking about how big women’s football is getting and talk about how big it is.Georgia Stanway

Georgia Stanway encompasses the mood around the England squad right now. While the message both pre-tournament and throughout has been one of calm and not getting carried away, there is always a feeling around England teams that pressure is something they have struggled to deal with in the biggest moments.

But 48 hours before the biggest game of her career, midfielder Stanway was as engaging, relaxed, and at times, as amusing as she ever has been in front of any media, let alone an absolute roomful ahead of the Euro 2022 final, the first for the Lionesses in 13 years.

It really does seem like this team has a different mindset, one embedded into them by head coach Sarina Wiegman. As Stanway refers to the team’s loyal and loud supporters as their “12th man,” she quickly changes her answer to “12th woman… damn… so close,” before laughing at her own “error,” but a laugh that is returned by the assembled media.

There is just an air of calm around the whole squad, the whole environment. During a busy final day at the team’s Lensbury Resort in South West London, there is little feeling that such a big game is just around the corner.

It has been an incredible tournament for many of the Lionesses, particularly those starting, and for Stanway, until a reshuffle just weeks before the tournament, it didn’t look like the future Bayern Munich player would be starting at all until captain Leah Williamson returned to defense and left a vacant spot in the midfield.

“I don’t really know what moment flicked it, what moment changed the situation, but obviously I’m fortunate for that moment. I genuinely don’t know what changed her mind, there was no conversations as to why or what had happened or the change or whatever. I think it was literally just down to the situation.”

The 23-year-old was caught in somewhat of a no-man’s-land when Wiegman took over, having not been a regular starter until predecessor Phil Neville.

Playing in an unfamiliar right back role at club level didn’t help, as Stanway herself admitted, and she was open about the fact she was far from a guaranteed starter when the Euro 2017 champion arrived last autumn.

“It’s been a bit of a roller-coaster ride,” she said. “I think when Sarina first came into the job, I don’t think I was in favor. I was still playing full back at the time at Manchester City and I was trying to fight for a spot in England in the midfield, and I was finding that balance really hard.

“It was probably only when I got to the Arnold Clark Cup that I could put my foot down a little bit more and say, ‘I’m here, this is what I can do,’ and bring that aggression and physicality back into my game, and the confidence as well.”

Stanway, however, takes the positives from a career at City that has seen her move from midfield, to a number nine, to a right back, and at one point even being pencilled in for the backup goalkeeper spot in case of emergency.

“Although I was trying to do my best in those positions and bring different aspects out of my game, I just didn’t find any consistency; whereas as soon as I was able to get in midfield, probably from February time, I was able to just knuckle down and work on that.

“The biggest thing for me is consistency. If I keep my game at the highest level, or the level I want it to be at, on or off the ball, energy levels, just anything, that’s where my good run comes from.”

Stanway’s humor and relaxed mood continues when discussing messages the team has received from elsewhere, with the likes of David Beckham and Lewis Hamilton posting on social media on Friday, and the midfielder admitted several of the England men’s team have been in touch, having reached a Euros final themselves 12 months ago.

“Quite a few of the men have been in touch, just wishing us well and asking if they can have a ticket. ‘Sorry lads, we’re all sold out!'” she laughed.

“They’ve been at us, just giving us all the information they can. Obviously, they reached this point last year and just trying to make sure we can do one better. We’ve had so much support, whether it be footballers, people around the hotel, and it’s mad how many people actually recognize us.”

Has any advice in particular struck home? Unsurprisingly, among all the famous names leaving messages, it is head coach Wiegman who has had the most lasting effect with her words of wisdom.

“It’s making sure we go out there and play with a smile on our face. The biggest thing Sarina said was at the start, ‘Play for the little girl that wanted to be in our shoes.’

“So I’ll play for the little girl who wanted to play at the start, went to training, loved it, dreamed to be in our position. Yeah, I’ll play for her.”

When speaking about the record-breaking crowds or the 9.3 million people who tuned in to watch the team’s semifinal win against Sweden on Tuesday, Stanway again turns to humor to deal with the line of questioning.

“Yeah, it’s a good job that I can’t see any of them! They’re all behind the screens, my eyes are on the ball.”‘

She does, though, leave a lasting impression with her next line, and shows an added maturity to her mindset, but also the reality of where the women’s game is now at.

“We’re just hitting new levels every single time. When you’re kind of in the moment, you have to block it out. The moments of celebration you can get involved with the fans and on Sunday, they’re going to really enjoy it and they can play a massive part in being our 12th man.”

While both Stanway and her 22 teammates are on the journey of their lives, it hasn’t all been easy.

The team has been away for some time now having been one of the first nations to join up for a pre-tournament camp over a month before the tournament started, and still relatively strict COVID-19 protocols due to the ever-increasing number of cases again has ensured the players have been kept in a bubble for the most part.

It means despite having their families and friends at all the games so far, they’ve been kept at arm’s length throughout, and whatever happens on Sunday, Stanway can’t wait to see her family up close again.

“Definitely my parents are the first in line for a hug on Sunday,” she smiled. “They have been to every single game, but I can only speak to them from a distance. They are in the stands and I am trying to have a conversation with them. It’s not ideal!

“We had a send-off at St. George’s Park, which was maybe six weeks ago now? This is week nine that we have been on camp, it’s been a long process. People obviously think because it is a home tournament, our families have been in and out every day. One of the hardest things to deal with is keeping football to one side and working within this area to find a get-out from football.”

Not to make things sound too down ahead of the biggest game of her career, Stanway ends on another humouros note.

“I am massively looking forward to seeing my family on Sunday — hopefully, they won’t be too drunk by the time the gave is over!”