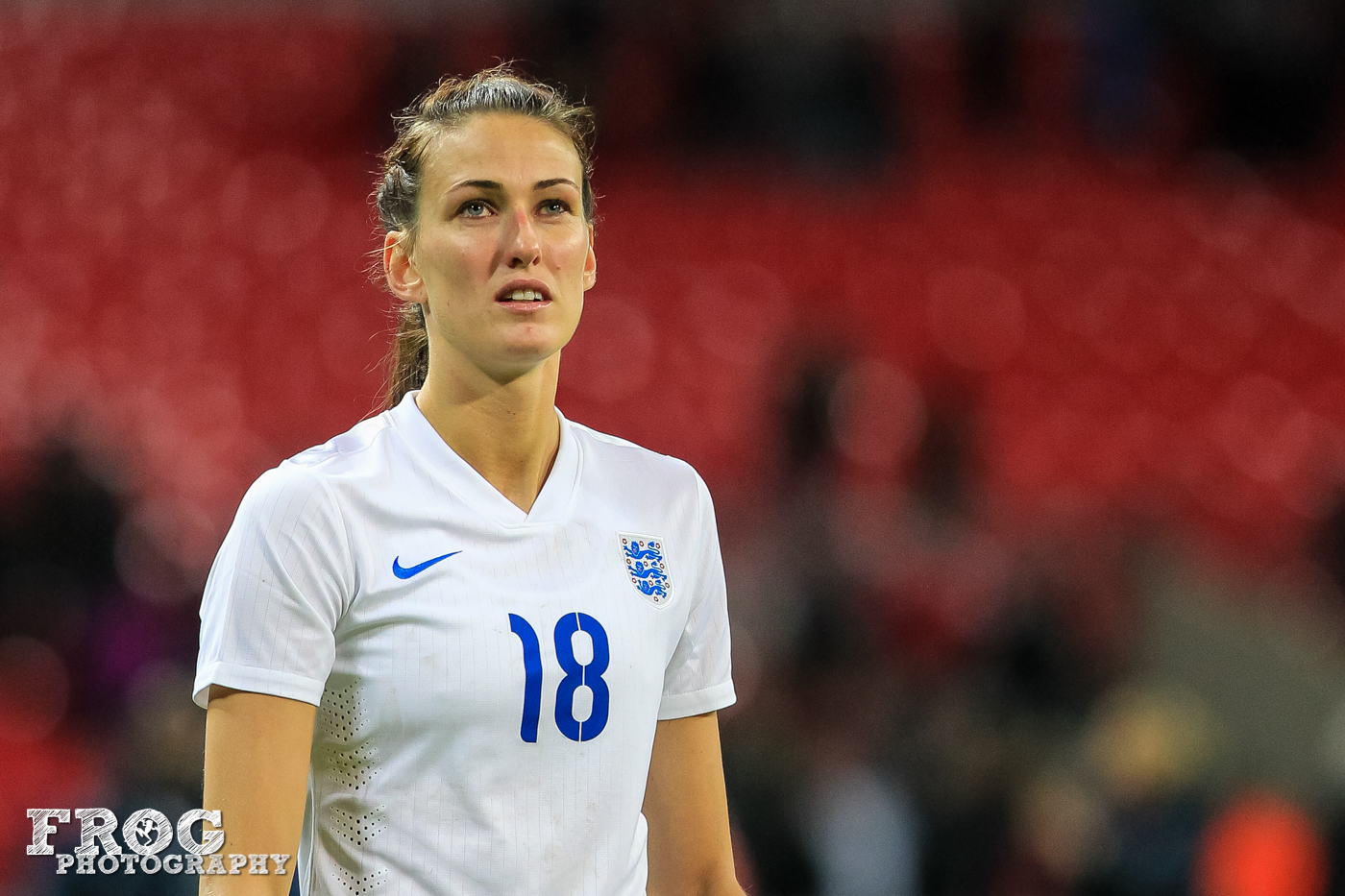 Richard Laverty·
EnglandEuros
·June 22, 2022·7 min read
Share
I think if you speak to me about anything that’s happened in my life, I’ll always remember them by tournament years. Something will have happened and I’ll be like, ‘Oh yeah, 2011, that was the World Cup.’ Basically, the tournaments have become my life and for that I’m very grateful.Jill Scott

Jill Scott admitted it was “probably one of the worst days of my life” as she waited to find out if she would go to a tenth major tournament with her country and her first on home soil under new England head coach Sarina Wiegman.

Last Wednesday at St. George’s Park, the former Netherlands head coach told the 28 players originally called up in individual face-to-face meetings who would be going and which five would miss out. Scott’s role was less than certain compared to past tournaments as her game time has become more and more limited for both club and country.

The 35-year-old, though, will take part in a landmark tournament for her on a personal level, but admitted the feeling that comes with the selection process has become no less stressful over the years since her first tournament back in 2007.

“Definitely not!” she laughed. “I think it was more about being relieved last week to be honest — definitely felt the pressure.

“I think if you look around the team and the 28 we had, the talent in the group is absolutely massive, so yeah, on Wednesday it was probably one of the worst days of my life to be honest, waiting to hear if you were in. That’s just a massive reflection on the talent that we have and it definitely wasn’t one of those routine days where it’s just, ‘Yes, you’re in.'”

Unlike in the past in which players have received phone calls or emails, Wiegman decided to face all 28 players in person in individual meetings throughout Wednesday, with players sat around waiting to be called in for what several members of the squad have described as X Factor-like meetings.

Scott admitted it had been different under previous head coaches, but that Wiegman really wanted to do it that way out of respect for every player, and in her own personal situation was content she had done everything she could do to be in with a shot of selection.

“Obviously, I went out on loan to get game time and that was good because I played the second half of the season. I only missed the last two or three games to an injury which was more precaution than anything.

“There wasn’t really a massive conversation [with Wiegman], obviously she had to get through a lot of conversations that day. She just said she believed in me, what I bring on the pitch. It was positive in that sense and, if I’m being honest, I probably wasn’t listening too much in that moment, I was just waiting to hear if it was yes or no!”

It means that even at the tenth time of asking, this summer will be a new experience for a player approaching the end of her career, and she’s content knowing she gave it everything to be involved at a home European Championships.

“I think with every tournament, you want to be at it and you’ll give it your all, but at the same time I just said I’d give it absolutely everything and obviously I’d have been disappointed if it was no, but I could have sat back and said I’d done absolutely everything I could to be here and I wouldn’t have said anybody deserved the shirt less than me. It’s just down to somebody’s opinion at the end of the day.”

As the players waited one by one to be called, Scott joked she had worked her way through three flat white coffees by the time her text message arrived.

“I was probably shaking even more by then!” she laughed. “She actually said, ‘You look the most nervous I’ve ever seen you look’, and I’m just thinking, ‘Just say yes or no, just say yes or no!'”

Scott is more serious and circumspect when discussing the five players who missed out, including long-time club and international teammate and former team captain Steph Houghton, as well as Niamh Charles, Sandy MacIver, Katie Zelem, and Lucy Staniforth.

The midfielder went on to add that she has spoken to all five of them in the days since Wiegman made her decision.

“I’ve dropped them a text, but I guess their focus is now to go away from football a little bit and get their mind sorted, but yeah, I’ve reached out to all of them.

“It’s not a nice thing, but when you look at the talent in the room, whoever was going to go or not go, it’s just a difference of someone’s opinion and it can be such small margins.”

While Scott was no doubt not the only player to reach out to her team mates last week, her role in doing so only emphasizes the importance she also brings to the team as a leader away from the pitch.

England’s second most capped player behind Fara Williams with an incredible 156 senior Lionesses appearances, no one in the squad has more experience than the 35-year-old, and she offered an insight into how her perspective has changed over the years as she enters what could well be her farewell major tournament, even if it may not be as much as people think.

“You tell me! I don’t think I’ve changed, I think if you’d have asked me in 2007 I’d have probably been very similar. I’m very grateful, very honored, I can’t believe it’s going to be 10 tournaments actually and I never take them for granted.

“I think if you speak to me about anything that’s happened in my life, I’ll always remember them by tournament years. Something will have happened and I’ll be like, ‘Oh yeah, 2011, that was the World Cup.’ Basically, the tournaments have become my life and for that I’m very grateful.”

She does though admit her “role has changed” with the likes of Keira Walsh, Leah Williamson, Georgia Stanway and company emerging over the last few years, but Scott is still convinced she “contribute” on the pitch when the tournament gets under way in two weeks.

“It’s no secret I haven’t had a huge amount of game time for England, but I’m always training hard, bringing energy, bringing 100 percent, always communicating, and always checking in with the girls away from the pitch if they’re struggling with anything.

“Especially with midfield stuff as well, we’re very good at bouncing ideas off each other. In 2019, I played seven games in midfield, so I know how difficult it will be for some players, so it’s about reassuring them but pushing them at the same time.”

Scott admitted she hasn’t had a specific conversation with Wiegman about her game time, but reflected on her start against Spain at the Arnold Clark Cup in February as both proof and reassurance she can influence games against some of the best in the world.

“If I’m being honest, I wasn’t expecting to start against Spain, that was a bit of a shock; suddenly you’re playing and you haven’t played for a while and it’s against some of the best players in the world, but that was a good challenge for me.

“‘Am I still at this level?’ I felt I competed well and it’s just making sure I keep that level if called upon. The talent in midfield is great. We’ve got Leah, we’ve got Keira, I joked about sending Leah back to defense so I’ve got more of a chance! No, she’s done a fantastic job in there. Leah, Keira, Georgia, Fran, Ella — the competition is very high, but I hope I can keep pushing them and bring the energy off the pitch in terms of training too.”

While expectation has naturally grown as the England team has improved over the years, it is perhaps at an all-time high off the back of three consecutive semifinals, the promise of a home crowd backing the team at every game, and last summer’s hiring of the defending European champion herself as head coach to replace Phil Neville.

Scott and her teammates will be looking to go at least one step further than at the last three major tournaments, including the last Euros in 2017 when they fell to Wiegman’s eventual champions Netherlands, and Scott admitted she does view things differently as she’s gotten older.

“There’s definitely a shift in it,” she said. “As you get older, you do think about things a bit more. I look at Lauren Hemp and Jess Carter and others and when I was younger you’d come to days like these and it was just about this day and then tomorrow, but when you get older you do think ahead to the games and the crowds a little bit more.

“The pressure changes with more eyes on the team and more eyes on you as an individual. But this is where we’ve wanted the women’s game to go and we’ve got to go out there and enjoy every minute. There’s going to be a lot of expectation, but you’ve seen the talent in the group, and we want that because we think we can deal with it.”