Back from Injury, Chloe Kelly Looks to Return to Form and Perhaps Euro 2022 Selection 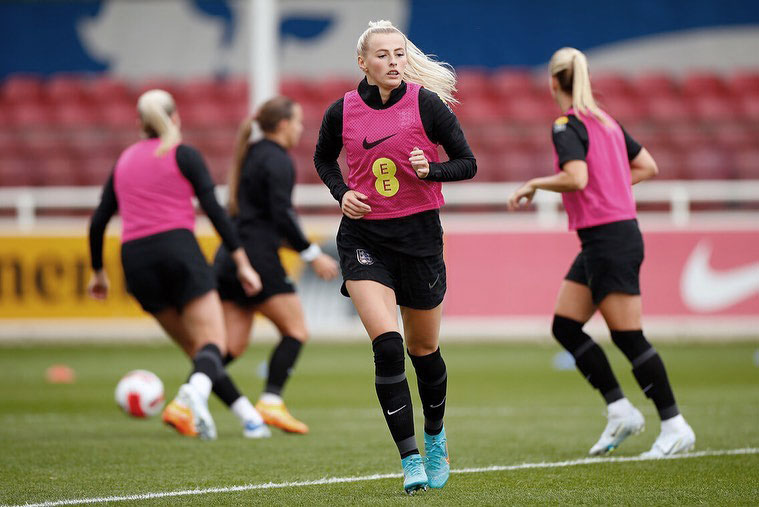 Chloe Kelly via Instagram
“The moment I got injured I said I wanted to be at the Euros and that’s what I’ve worked towards each day.”Chloe Kelly

Manchester City winger Chloe Kelly says it has felt like she’s “never been away” after returning to the England squad after an ACL injury at the end of the 2020/21 season kept her out for 12 months and threw her chances of being involved in a home European Championships into serious doubt.

The 24-year-old was in the form of her life coming toward the end of her debut season in Manchester and was beginning to hold down a regular spot in the Lionesses squad before the injury against Birmingham City ruled her out of the majority of last season and also ensured she missed the Tokyo Olympics for Team GB, a squad she would have almost certainly been a part of.

“The girls have welcomed me back nicely and it’s been good to come in to a new set of staff as well,” said Kelly. “To get on the ball, get on the pitch with them, and get to know our new way of playing.

“It’s been brilliant. I’ve enjoyed every moment of being back on the grass with the team, learning from Sarina is great and I’m excited for more.”

Amazingly, despite her ever-rising reputation within the game and the form she has enjoyed both pre- and post-injury, this week has been Kelly’s first working with Sarina Wiegman and she still only has five senior England caps to her name.

In truth, Kelly’s injury couldn’t have come at a worse time, but the tournament being postponed a year due to the COVID-19 pandemic has at least given her a fighting chance of being involved and she looks to avoid being one of the five players Wiegman will cut from her squad next week for the final tournament next month.

Kelly, though, isn’t thinking about that, admitting she’s just grateful to be back involved and wants to show her best form in order to give herself the best chance possible to be in the final squad of 23.

“I think it just shows the effort I did put into my rehab and the people around me, what they put into it. I always believed to be honest because I knew the effort that I was putting into it day in, day out and maybe you don’t see those moments when you’re in it, but looking back now on my journey, it’s difficult moments like that [that] paved the way for me to be here today. There were days I found difficult and didn’t think I’d get through it, but now you appreciate these days a little bit more.”

Kelly said the goal is to “enjoy herself” in camp and get back to business when the squad join up once again after the bank holiday on Sunday night, when the serious business gets close with five players set to be cut before the end of next week.

Despite being one of the best forwards in the country before her injury and some good form in the handful of games since she’s returned, Kelly’s status of having missed almost a whole season will make her one of the major question marks for inclusion, but she is fully focused on impressing Wiegman and getting back to top form.

“It’s just made me so excited to come here on camp,” said the winger. “I didn’t really want the season to end because I felt so fresh, so to be back here on the grass so quickly is brilliant.

“I want to be there and that’s what I’m working towards. The moment I got injured I said I wanted to be at the Euros and that’s what I’ve worked towards each day. It’s the first time working with Sarina, everyone else has done that, so I just need to impress this camp, show what I’m capable of and let my football do the talking.”

Kelly scored twice and assisted three goals in the seven games she managed before the end of the season, picking up where she left off by being a constant issue for defenders, and the former Arsenal academy graduate is more than pleased with how it’s gone for her since stepping back on to the pitch.

“Yeah, definitely [pleased]. I was in good form, coming back from an ACL injury it can be very difficult to pick up where you left off, but I think I’ve got so much more to give and even before my injury I’d say that because I’m hungry to learn and hungry to get better. So, yeah, I’m just excited to learn and there’s so many great players to learn from.”

It was toward the end of her injury cycle that Kelly admitted to first having real contact with new Lionesses head coach Wiegman, who, like the player herself, just wants to see Kelly work her way back to top form.

“Towards the back end I had a few conversations with Sarina and it was just about getting minutes under my belt and showing I could get back to the level I was at before my injury.

“It made me very excited knowing this could be in the pipeline if I got back on the pitch and played well.”