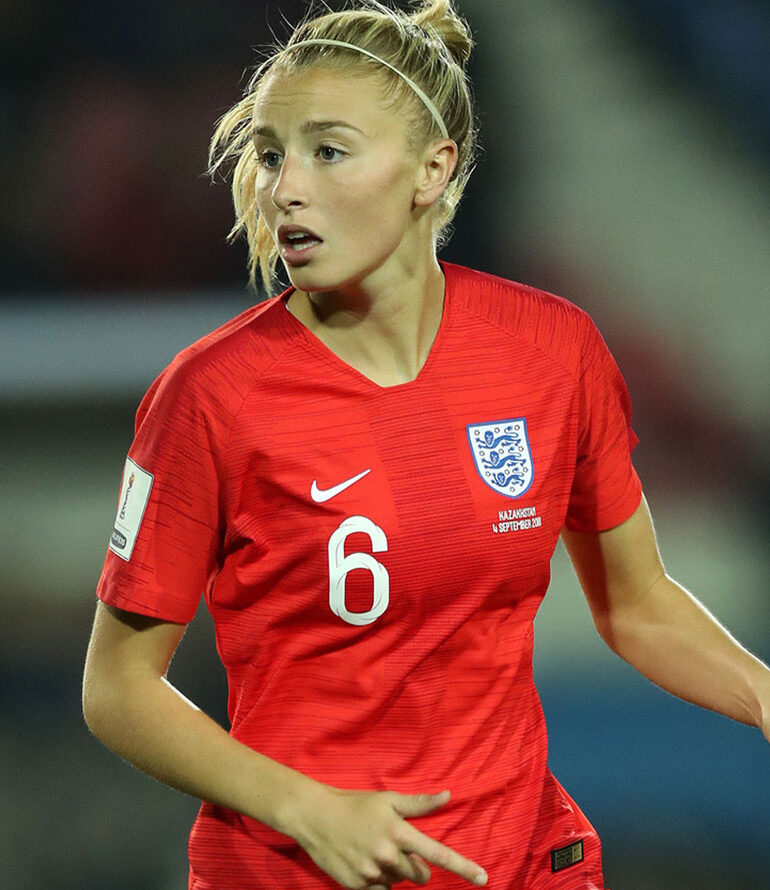 Lionesses captain Leah Williamson says it’s business as usual as she prepares to lead her country into a senior tournament for the first time after being handed the armband by head coach Sarina Wiegman ahead of July’s European Championships.

Despite regular captain Steph Houghton being recalled to the squad this month, the defender’s lack of game time and remaining uncertainty over her final place in the squad, Wiegman made the decision to make Williamson her permanent captain for the tournament after leading England to success in the Arnold Clark Cup earlier this year.

England met up for their first preparation camp as the tournament gets ever closer, and the 25-year-old is fully focused on preparing herself for the tournament as usual rather than thinking about being the captain for the first time at a senior tournament, despite Houghton’s return.

“It’s no different to how it always has been,” said Williamson. “Steph’s obviously a great addition to the team and just raises the competitiveness of the squad to another level really. It’s been great, fingers crossed she stays well and she’s fit and healthy.”

Manchester City defender Houghton had been captain since replacing Casey Stoney in 2014 in the buildup to the 2015 World Cup and helped guide the Lionesses to three consecutive major tournament semifinals, including a historic bronze medal in Canada seven years ago.

Whether or not the 34-year-old is deemed ready enough to make the final squad of 23 remains to be seen, but Williamson isn’t getting too bogged down in her extra responsibilities and is continuing to do what she has always done on camps.

“I haven’t [given a message to the squad]. It’s not about me, it’s been getting the girls in and making sure everyone is training hard. Sarina has expressed what she wants from everyone, it’s more of a buildup week really to get us back on the grass enjoying it.

“We’ve said it a thousand times but the team is quite sturdy, self-sufficient, everybody knows what their role is, and it’s been nice to come back in and just pick up where we left off, but this time with a bit more grit. It’s business time.”

Williamson, though, did admit it will always be special to lead her country, after doing so at various age levels as she was progressing through the system, whether it was at the Under-17, Under-19, or Under-23 level.

While she’s not getting too ahead of herself and thinking about leading her team out at a sold-out Old Trafford in July, Williamson admits it is a special feeling she hopes never gets old.

“It will always be,” she smiled. “I hope it is anyway, because it means I care enough about it and I’m giving the role the respect it deserves. It’s weird, because on a daily basis you don’t really think about it, but those moments when you do walk out of the tunnel it is special and nothing really has compared to that in my life.”

With all of England’s group-stage games against Austria, Norway, and Northern Ireland set to be in front of sold-out crowds, it’s a big boost for the women’s game in England, with other group-stage matches not including the hosts also sold out or close to capacity with the tournament just over a month away.

The top players like Williamson are now used to playing in front of big crowds on sporadic occasions with domestic or European games being held at larger stadiums, and the captain believes it will only further help to convince people that the women’s game is not just here to stay, but only heading in one direction.

“The mentality of women’s footballers is we’re happy with where we are, but we always want more,” she said. “I can assure you as soon as that first game kicks off and it’s sold out, that’s what we expect, that will be the goal all the time.

“But when you talk about it, first game of the Euros, sold out, at Old Trafford, it’s people taking it seriously and when we’re trying to convince people to come and support us, that kind of thing helps.”

There is serious business to be had before we reach that point, with Wiegman facing the tough decision of cutting five players from her squad, with an announcement expected in just over a week’s time.

One will be one of the four goalkeepers in the current squad, but with question marks around the fitness of not just Houghton, but Fran Kirby too, there could be some tough decisions for the Lionesses head coach to make, but Williamson says it’s not something that has yet been discussed among the squad.

“I just said this, this is the first time I’ve kind of thought about it when you guys just said it and I think that’s credit to everybody, but also being in amongst this sort of setup ahead of something as big as this, you’d do anything you could to be involved in any way you could really.

“Right now it’s about settling in and everybody making sure they enjoy what they’re doing, but also giving a good account of themselves.”

Between now and then the squad will all return home over the upcoming four-day weekend to mark the Queen’s Platinum Jubilee, with the 28 players meeting back up at the start of next week to continue preparations for upcoming friendlies against Belgium and defending champions Netherlands.

Former Dutch international Wiegman won the last European Championships with her home country five years ago and will once again lead a team into their home tournament this time around, with Williamson believing her experiences of dealing with the higher expectations of being the hosts will be invaluable come the business end of the tournament.

“In preparation, we’ve got some education sessions and things like that to share experiences. Obviously, we know she has that previous experience and she touches upon it a little bit, but we haven’t really reached that point yet.

“I am intrigued though to hear those stories and see how they did it. She did say though this is a different team with different experiences, but I think that experience can be invaluable.”