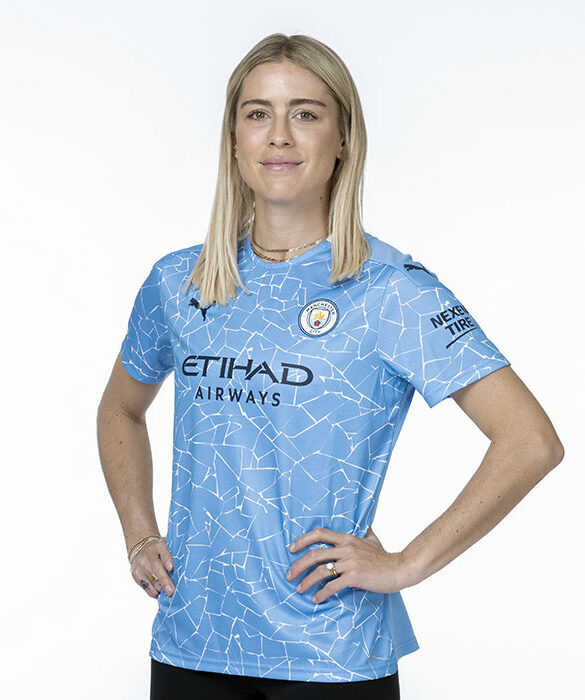 Manchester City center back Abby Dahlkemper says her teammates have been “amazing” in welcoming to her to the club after the U.S. World Cup-winning defender joined from North Carolina Courage of the National Women’s Soccer League last month.

The 27-year-old made her City debut in Sunday’s 4–0 FA Women’s Super League over West Ham United, and Dahlkemper says she is already settling into Manchester life while speaking to the media for the first time since completing her move.

“I’ve been here a week ago and you know the city for what I’ve seen has been so cool and the girls in the team have been amazing,” said Dahlkemper. “They’ve been so welcoming and it has really made my transition here so easy, so I’m really excited to continue with the team and obviously when it’s safe and the lockdown is over, I can kind of explore the city as well. But I’m really happy to be here and I’m learning a lot and excited about the future.”

Like everyone else, Dahlkemper was enjoying some quiet time after a shortened NWSL season in 2020 due to the ongoing COVID-19 pandemic, but joined up with her national team for a camp last month before moving to Manchester to join her club, where she’s committed to a two-and-a-half-year contract.

It won’t be too long before she heads back off to the U.S. for the 2021 edition of the SheBelieves Cup, but even in her short time in Manchester the defender has been impressed by what she’s seen and experienced.

“I’m at the facility for a good amount of time during my day, so it’s been great and the facilities are world-class. It’s amazing, everything you need is right there and the fields are absolutely awesome as well. So I’m loving it!”

The move also means Dahlkemper is reunited with Same Mewis, her long-standing teammate with the Courage and the USWNT (and UCLA), as well as Rose Lavelle.

While Mewis missed out on Sunday’s win due to an injury picked up in the national team’s most recent match against Colombia, both Dahlkemper and Lavelle were on the pitch together and the center back is delighted to be back playing with one of her closest friends.

“I can’t remember the exact number years off the top of my head, but it’s a large number I’ve played with Sam now,” she said. “Yeah, I think we’ve been together for like over 10 years. She’s obviously one of my best friends, so being reunited with her has been awesome. To be able to see her grow as a person and a player has been really inspiring and we’ve been there for each other through the ups and downs, so it’s really special to continue this journey together on and off the field.”

While Mewis and Lavelle have only initially signed on for the 2020/21 campaign, Dahlkemper has done what no other USWNT player has done and committed her long-term future to the FA WSL and Manchester City, with her dealing keeping her in England until the summer of 2023, just before the next Women’s World Cup in Australia/New Zealand.

Talking about her decision to sign such a long contract compared to her teammates and also the likes of Tobin Heath, Christen Press, and Alex Morgan, Dahlkemper said she wants to take in the experience and believes it is better to do that in the long-term than signing a short-term deal.

“I think I really wanted to kind of relish this opportunity to experience Europe and to be a part of this team for a while and to get to really experience everything.

“I think I’m going to grow throughout these years and I wanted to do something different and have a change, so I think to be able to be here for two and a half years is just going to benefit me on and off the field, and I’m really happy and hoping to win championships with this team, and I think we can look forward to that.”

Dahlkemper also admitted the opportunity to test herself and grow in a new league in the hope that she continues to grow as a footballer was an important influence for her and she praised Manchester City for what they will be able to offer her over the coming two and a half years, and admitted both Mewis and Lavelle’s praise had an influence.

“I think ultimately it was 100 percent up to me, but they said nothing but good things so that definitely helped.

“I think just kind of the difference in the technical and tactical side of the game here is just a lot more elevated, and I think having world-class facilities and gym access and the recovery tools and the field all there is something really exciting. You’re able to be a professional footballer and have that be your main focus and you’re in your office from 7 to 2 and that’s really your work day.

“So, I think that was really cool to experience that and live in a different country and experience new things. The talent of the team is unbelievable. You have top international talent from all these different teams, so I just know I’m going to get better here and I’m excited for the opportunity and to get challenged and to grow.”

On the differences between the FA WSL and NWSL, Dahlkemper added, “I think there is a lot of physicality in the WSL and that is very similar to the NWSL. There’s a lot more tactical awareness and the way that people play here is very structured and the ball possession is very valued here and that is very different to the American league. The tactical and technical ability of the players here is very high, especially at City, and that is something that is cool and different and is something I’m going to work and grow on.”

Being a center back, Dahlkemper also admitted she believes the way Man City play in particularly can help her grow as a player, given the possession-based nature of the league.

Against Brighton last week, City broke the record for most passes completed in an FA WSL game, with Alex Greenwood breaking the individual record. Against West Ham, Dahlkemper completed more than 100 passes as City constantly moved the ball around trying to move West Ham’s solid back line, and she hopes a different challenge can add more to her game.

“The way that City plays, the goalkeeper and the center backs are setting a lot of the play and I think that was attractive to me,” she said. “The possession and the value of that is kind of different to what I was used to, it’s just kind of different and looking at a new way of playing. New opportunities, playing with players that are top, top class and I think at the end of the day it was the opportunity to learn and be surrounded by this new-ness. I just hope I can help the team however they need me and hope I can learn a lot too; I already have and it’s only been a week.

“The technical and tactical awareness that is required of the center backs at the national team and at City is very, very similar, we’re not just defenders anymore, we’re setting plays from the back and we need to make the right decisions and send the right balls in depending on the other teams play or what spaces we can take advantage of. That’s exciting because it’s fun having the ball, playing certain passes, and to read the way that different teams will line up. It’s exciting, but, yes, there’s definite similarities between here and the national team.”

Alongside England captain Steph Houghton, the pairing instantly make up one of the most experienced pairings in the game. One of the center backs most comfortable playing on the ball, Houghton has already made an impression on City’s latest acquisition.

“Steph’s been amazing to work with. It was kind of seamless in the game yesterday, in my role as a central defender I have to talk and communicate and organize and so that’s not only going to help my teammates, but myself as well.

“I think just being really able to trust my teammates and them trust me. Yesterday felt seamless but that’s credit to the girls on the team, they were so nice and so welcoming with me so I felt comfortable and I think that’s a good thing because we all need to work together to obtain a goal and win things.”

For a player who has won so much at not just international level but with an NC Courage side that has been so successful in the NWSL in recent years, Dahlkemper has the ultimate winning mentality, something that she believes will be matched by her new teammates and a club which has won seven major trophies in the seven years since its relaunch in 2014.

“There’s definitely a winning mentality here, you need that to have success as a team,” said the 2019 World Cup winner. “This team wants to do big things. We’ve set standards and expectations high and we don’t let ourselves dip under those standards, that threshold. Top to bottom this team is so talented with top internationals and every day you’re going to get challenged and every day you have to earn your right to play and perform. Hopefully, I can help the team grow and I know the team will help me grow. Change and challenge is good because you’re going to grow and you’re going to get better.”

Dahlkemper did admit she will miss aspects of home, including her husband and her pet dog, though she will likely soon be returning temporarily for the 2021 SheBelieves Cup.

The United States has enjoyed a good start under head coach Vlatko Andonovski since he replaced Jill Ellis, and Dahlkemper said she has been in contact with her national team head coach about availability for national team camps.

“The importance of being 100 percent wherever I am, with City or the national team, he had nothing but support for me and it was important to get his blessing because I obviously want to represent my country for as long as I can and represent City also and give them my all as well. So, I think it’s just about finding the right balance and being able to stay healthy and being able to be available for selection.”

Before that, Dahlkemper has two tough games ahead of her as she continues to adapt to life in the FA WSL. Her next home game will see City face local rivals Manchester United under the night lights a week on Friday, but before that lies a trip to Arsenal this weekend, where she will likely face Vivianne Miedema who she came up against in the World Cup final 18 months ago.