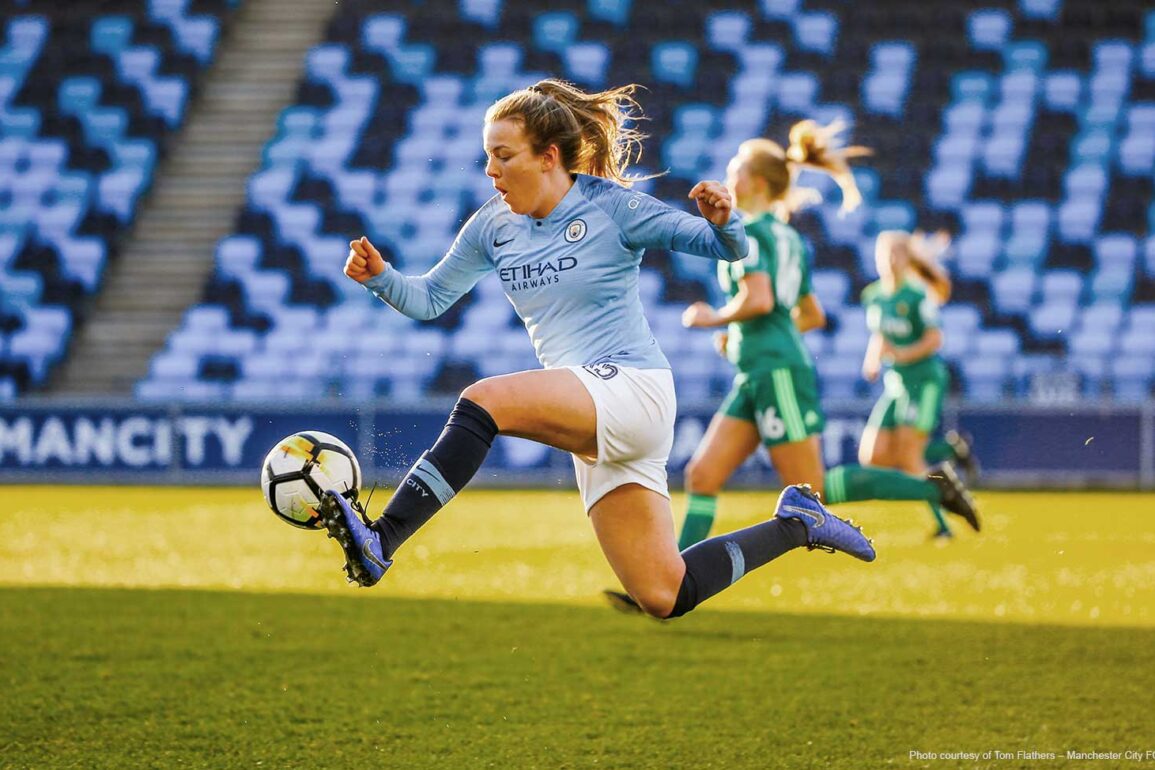 A 3 p.m. kickoff on a rainy Wednesday afternoon. Empty stands. No flurry of activity, no sense of nerves nor excitement, no drama under the usual glinting evening floodlights.

Instead, stewards stood around with little to do bar marshal the odd journalist up to the press box. A stadium so silent the rain could be heard clearer than ever on the CFA room and every rev of an engine passing by the stadium so clear you’d almost believe you were in the passenger seat.

This had everything but the feel of a decisive Champions League tie to determine who would move forward into next year’s UEFA Champions Round of 16, but that is 2020 as we tick down toward a close. Even the fact this game was being played just nine days before Christmas felt otherworldly. Still, played it was, and Manchester City prevailed, 3–0 (5–1 agg.), over Kopparbergs/Göteborg FC to advance.

When the action got underway, the preseason feel never quite shuffled away. It will certainly join many others gone before in the “not a classic” file and for 37 minutes, City largely played the ball around without creating too much, while the visitors struggled to trouble Ellie Roebuck.

When the opener did come, it was once again a reminder of what the occasion was lacking. A goal of Lauren Hemp’s quality, cutting in on her weaker foot and unleashing a curling effort from distance over Jennifer Falk deserved more than a smattering of applause from those on the bench, but there were no gasps, screams, or shouts of joy from the stands.

City, though, probably didn’t mind too much given it was the nerve-settler they needed to all but secure a pathway into the Round of 16. Goteborg’s task didn’t change a huge amount, they still needed two goals, this time just to force extra time, but such a comeback never appeared forthcoming.

Roebuck did have to be alert to push away a good effort from Göteborg FC captain Vilde Bøe Risa, out of contract at the game’s conclusion, while Falk made an even better one to tip a long-range free kick onto the bar after Alex Greenwood spotted the goalkeeper off her line.

It was only right Hemp’s goal was the key moment of the game as she put in a player-of-the-match performance. The youngster was a constant menace, twisting and turning her marker at every opportunity. Inside, outside, whipped crosses, low pull backs, Hemp was at times a woman possessed.

Hemp was withdrawn with just under half an hour to go and replaced by Georgia Stanway, who took less than five minutes to seal the tie. After Falk made another great save to deny Ellen White, Stanway slid home the rebound to confirm her side’s spot in the last 16 draw.

You’d have been forgiven for thinking you were watching a replay when minutes later Stanway tapped home her second after Falk once again denied White, the Blues number 10 enjoying the perfect introduction into what was becoming a routine affair.

For City and Gareth Taylor, it was a case of job done. Two years ago they didn’t make it past the first hurdle and last season stumbled at the round they’ve just qualified for, both times against Atlético Madrid, who they could face again this time around, but that can wait until February for head coach Gareth Taylor.

“I was pleased with how the girls managed the game today,” Taylor said after the match. “They’re a difficult outfit to play against and I thought they were impressive in their buildup play. I didn’t think we pressed high enough in the first half but we certainly did in the second.

“The first goal probably didn’t change the outlook a huge amount, they still needed two away goals, but the way we managed the game was really good. We scored three, could potentially have scored more and there were some good individual performances.”

Taylor also praised Hemp who was making just her second start of the season after returning to the starting eleven against Arsenal on Sunday. Hemp picked up a hamstring injury in August’s Community Shield that has kept her out of the reckoning until recent weeks, but she was without doubt the standout performer on the day.

“She’s a real big boost for us. She’s a boost for the team, she’s a good outlet for this team and she causes real problems for opposition defenses. We’re still having to manage her game time to ensure it’s not too much too soon, but it’s a huge boost to have Lauren back.”

If there was one negative on the day for Taylor, it was the enforced withdrawal of Caroline Weir, who has been in good form of late, due to a slight hamstring tweak the Scotland international felt in the first half.

Taylor believes it’s not too serious and still hopes to have Weir available this weekend to face Birmingham City, while also offering an update on the still absent Rose Lavelle.

“It was a bit of a tight hamstring. We’ve had quite a heavy load of games lately and Caroline’s played a lot because she’s been doing so well. It was a precaution really. Hopefully we can get her for the weekend but if not, it’s probably not the worst time to have this situation. If she’s not available for Sunday then we’ll make sure she’s ready after Christmas.”

On Lavelle, Taylor added, “She’s just had a slight setback. She jarred her knee pretty hard against Everton. It’s similar to Caroline, even though she’s missing these couple of games, when we come back after Christmas we expect Rose to be there or thereabouts.”

For Göteborg, they now return to Sweden to begin preparations for their Damallsvenskan title defense in 2021. The nature of the summer league schedule in Sweden means their recent success has already guaranteed them a spot in next season’s Champions League, and head coach Mats Gren will be hoping to be able to keep the core of his side together.

He’s already lost key players such as Natalia Kuikka to the Portland Thorns FC and Rebecka Blomqvist to VfL Wolfsburg, while captain Vilde Bøe Risa ‘s contract essentially expired at the end of the Man City encounter after the midfielder extended it by 24 hours from its original end date of December 15 so she could play the second leg.