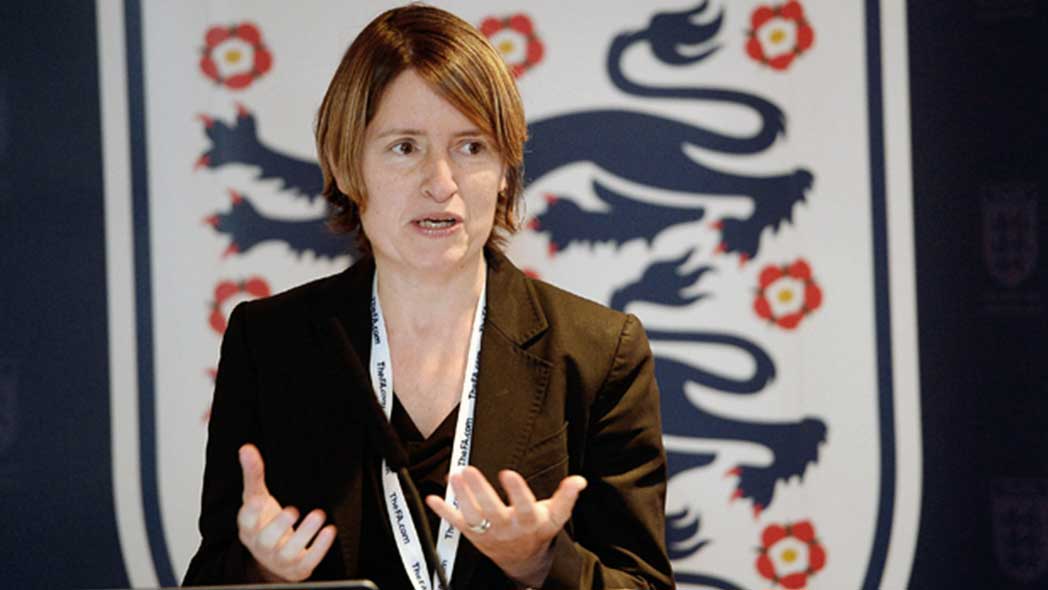 The FA's Director of Women's Football Kelly Simmons speaking to the media. (The FA)

Richard Laverty·
FA Women's ChampionshipFA Women's Super LeagueNews
·September 2, 2020·5 min read
Share
We have an agreement with the clubs and the board that from 2021–22, we’ll bring in homegrown quotas that will be the same as the men’s game; so of your squad, eight will have to be homegrown.Kelly Simmons

The FA’s Director of the Women’s Professional game, Kelly Simmons, has confirmed FA Women’s Super League sides will have to meet a homegrown quota from the start of the 2021–2022 season.

Simmons, speaking to the media earlier this week ahead of the new campaign, also confirmed the amount of loans a club can utilize has increased with immediate effect as more players come into the league from abroad.

While the league has seen the arrival of the likes of Sam Mewis, Rose Lavelle, and Pernille Harder in recent weeks, clubs in both of the top two tiers will have to ensure they have a minimum of eight homegrown players in their squads from next season, with that figure increasing in the FA Women’s Championship.

“We have an agreement with the clubs and the board that from 2021–22, we’ll bring in homegrown quotas that will be the same as the men’s game; so of your squad, eight will have to be homegrown.”

A homegrown player means a player who, irrespective of their nationality or age, has been registered with a club affiliated to the FA for a period of three seasons or 36 months prior to their 21st birthday.

In the Championship, the quota is varied depending on the squad size. Should Championship clubs have the maximum of 25 players available to them, 15 will have to be homegrown, with the number decreasing based on squad size. Currently all Championship clubs would meet the criteria with only a handful of foreign players currently playing in the league.

Simmons also confirmed clubs can now register up to six loan signings, up significantly from two last season, with a maximum of three signed from any one club.

Another stipulation is only two of the six loans can be over the age of 23, with the FA keen to ensure younger players gain as many opportunities in the top division as possible with the sudden influx of top talent from around the world.

“It’s one to watch, for sure,” said Simmons. “It’s something that we’ve been talking to the clubs about and the board. We are increasing the number of loans to make sure that young talent who are maybe not getting on the pitch can go out on loan and get key game time, which is so important for their development.”

Simmons also touched upon the potential impact Brexit will have on new players coming into the league from abroad.

Players currently from outside the EU have to meet strict governing body criteria to sign for a team in the league, meaning those who haven’t been regulars for their national teams and don’t have either U.K./E.U. heritage struggle to get deals playing in the FA WSL.

“At the moment there is free movement, as you know, in Europe, but that will change,” said Simmons. “If you come from outside of Europe, you have to go through the governing body endorsement criteria, which is much, much tougher and requires you coming through on international caps and criteria.

“The FA, as opposed to the league, are reviewing on both the men’s and women’s [sides], the government body endorsement criteria post-Brexit. That will inevitably make it more challenging [to sign for an English club], unless you’re a top talent.”

Simmons added: “We want world-class players and we’ve seen some amazing signings and that’s brilliant for the league and it’s brilliant for the England players because those who are playing here, they’re playing against some of the best players in the world. Of course, we want to make sure that we’ve got space for English talent as well and it’s always about trying to find a balance and work with the clubs and the board to get the right balance.”

One thing which won’t change imminently is the salary cap, which Simmons confirmed will remain at 40 percent of a club’s turnover, and also confirmed on more short-term matters that all FA WSL and FA WC clubs have agreed to take part in a minute’s applause before this weekend’s games, and all teams have agreed to take the knee pre-kickoff in support of Black Lives Matter.

Should a team be affected by the COVID-19 pandemic, any club may ask for a postponement should they have four or more players unavailable due to positive tests.

One thing Simmons did confirm may now be looked at in the near future is the possible expansion of the FA WSL, something which last year she confirmed wasn’t immediately being looked at as a priority.

But with more teams investing in their women’s team in the second tier, Simmons has at least opened the door to potential expansion and more promotion places, even if nothing appears imminent.

“There’s no reason why we can’t look at that down the line,” she said. “I don’t think I’d want to commit to a time frame because we have to bear mind in the WSL is a fully professional league and it requires a certain standard and investment both on and off the pitch. Down the line, there’s no reason why we can’t expand it and if we do, then promotion and relegation is one of the first things we’d have to look at.

“I think it’s something we have to look at down the line once we’re through this and see where clubs are at with their investment. I think the Championship will be really competitive, which is great. It will be fascinating to watch. Durham are always there, Liverpool are there, Leicester have gone fully professional, and you’ve got Sheffield United, who I watched a couple of times last season and thought were excellent. I think it’s only going to get better and better as well, which is great.”

Simmons also confirmed the FA is working hard on completing the schedule for the coming season and working around the slots available to them when asked about the 2019–2020 Women’s FA Cup final being played just four days after an England away friendly.

It was confirmed last week that Phil Neville’s Lionesses will travel to Germany for a friendly match, their first game since February’s SheBelieves Cup, on October 27, just four days before two teams will walk out at Wembley for the FA Cup final.

“We’ve always known there are challenges with the calendar and we knew there was a FIFA window there. The games will fall thick and fast as we look to deliver the season ahead. The two clubs in the final will be delighted I think to complete the tournament. We’ve got it agreed with Wembley Stadium, BBC One, and the clubs, so we’ll have to deliver.”

Lauren O’Sullivan, the FA’s Head of Women’s Competitions, added: “We’ve been taking calendar consultation with clubs and partners and tried to take a collaborative approach to what is a difficult situation.

“Everyone is understanding of the challenges we’re facing with a more congested schedule than ever. We’re working really closely with the clubs and our competitions team at the FA with the FA Cup to get the games in the slots we’ve identified.”

Simmons also admitted the FA will continue to strive to put the “biggest games in the best slots” as they did last season.

Refereeing has also come under an increasing spotlight in the women’s game, but Simmons confirmed the new ‘Ref360’ data used across the FA WSL and Premier League last season to analyze every single decision a referee makes, confirmed 98.5% of decisions were correct, though this includes minor decisions such as free kicks, corners, throw-ins, et cetera.

But with a view to improving refereeing, Simmons also confirmed there will be a reduced pool of referees in the FA WSL and FA WC this season based on performances.