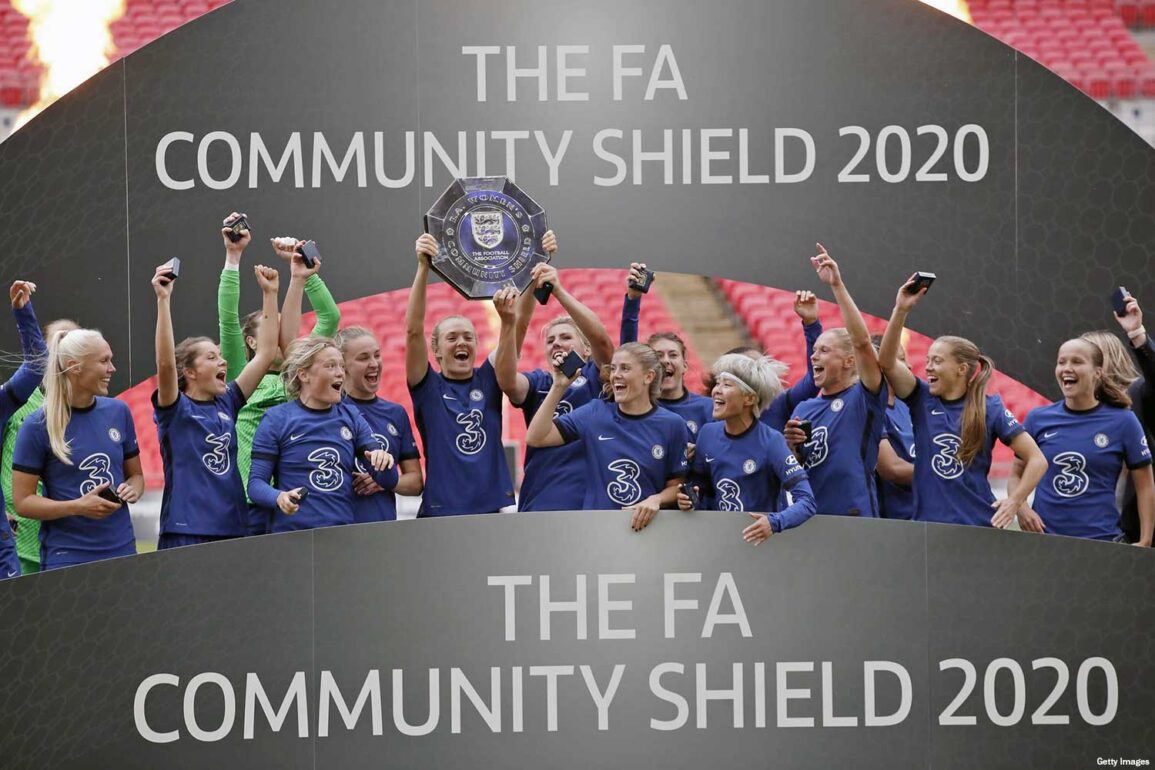 Chelsea Gets the Better of Manchester City in FA Community Shield

Richard Laverty·
FA Community ShieldFA CupFA Women's Super League
·August 29, 2020·7 min read
Share
This hasn’t just happened. I haven’t just assembled the team overnight. This has taken some time to build the quality.Emma Hayes
[dropcap]I[/dropcap]t was FA Women’s Super League champions Chelsea who took home the first women’s Community Shield to be held in 12 years with a 2–0 win over FA Cup holders Manchester City. In front of an empty Wembley stadium, it was a close affair that saw both sides waste chances, but victory for Chelsea was sealed when Millie Bright thundered home an effort from range shortly after the game swung on a Jill Scott red card.

Substitute Erin Cuthbert wrapped things up for the hosts in stoppage time to give Chelsea their first silverware of the new season.

Both sides put out strong lineups with bragging rights at stake early in the new campaign, but there were surprises with both team’s top scorers in Beth England and Ellen White respectively left on the bench.

That left Sam Kerr and Georgia Stanway to play the number nine roles, and while Kerr’s pace and movement caused City endless issues, her wayward finishing quickly became one of the themes of the afternoon.

Kerr was deployed with Guro Reiten to her left and the returning Fran Kirby to her right, the latter playing her first game since November last year.

Stanway, meanwhile, had plenty of pace around her in debutant Chloe Kelly and Lauren Hemp, who had to go off in the first half after picking up a hamstring injury.

Hemp’s withdrawal came just as City were starting to have some joy in getting the ball out wide, particularly with Hemp up against Maren Mjelde.

After she was withdrawn, Kelly swapped to the left and her dazzling run set up a tap-in for substitute Janine Beckie, but the Canadian was offside.

Most of the action did indeed come down that side of the pitch, whether it was Hemp or Kelly tormenting the Chelsea defense or vice versa, Mjelde constantly overlapping Kirby, something Demi Stokes was unable to deal with.

City’s biggest chances came through Stanway, who first saw a powerful effort well-claimed by Ann-Katrin Berger before another effort was pushed away only for Kelly to slam the rebound against the post.

Gareth Taylor, who was taking charge of his first competitive Man City game, was pleased to see his youngsters perform without fear but was disappointed to lose Hemp with just a week to go to the team’s opening FA Women’s Super League game against Aston Villa.

“Yeah, it was pleasing to see young players going out and performing on a big stage,” said Taylor post-match. “One thing I felt from both teams was that it was quite a slow game. Sometimes the occasion can be difficult and the big spaces on the pitch and the weirdness of having no supporters in there giving you that extra bit of energy. Those young players have got that good experience under their belt now and they gave a really good account of themselves.”

On Hemp, he added: “I didn’t think she would be able to continue. It was a bit of a blow, especially happening at that moment in the game where I felt Lauren and Chloe were having some real joy out wide against their full backs. But these things happen and sometimes you have to manage it. It’s unfortunate, especially given it was the final game before the season.”

While Taylor’s front three were full of youthful exuberance, there was a familiar look to the rest of his team bar Esme Morgan, who started at right back after returning from a year-long loan at Everton.

Captain Steph Houghton and midfielder Jill Scott also started — with 249 international caps between them — and Taylor admitted it was a conscious decision to start experienced heads given the occasion and venue.

“That was taken into consideration at the start,” he said. “We are quite low on able bodies at the moment. We are waiting on a couple of players so that was difficult in that respect, but the young players especially, it was a new experience for some of them.

“The likes of Steph and Jill, who have played here before on a number of occasions, we tried to draw on that experience from myself and the young players and that was really important.”

For Chelsea, the chances were much clearer, but it still took until well into the second half to overly test Ellie Roebuck. Starting in a rare midfield three alongside Sophie Ingle and new signing Melanie Leupolz, Ji So-yun ran the show and was a constant thorn in City’s side, so much so it was her movement and quick-thinking which drew two fouls and two yellow cards that saw Scott dismissed in the second half.

For Kerr, it was a case of what might have been. Barely 10 minutes had passed when she was put through on goal but prodded her shot wide of the near post with the outside of her boot.

It would get worse. Next, Kerr’s header went wide after Ji’s goal-bound free kick struck Magdalena Eriksson. The worst came in the second half when she somehow slid wide Kirby’s low ball from point-blank range.

As she ran through on goal a second time soon after, there was at this point little surprise as she sliced another clear effort wide, but it would prove to be a key moment as seconds later Scott was dismissed for a late foul on Ji, giving Chelsea a player advantage.

When asked post-match if Kerr was lacking confidence, Hayes praised the striker’s overall contribution to the game, while Taylor was frustrated to lose Scott at such an important point in the match.

“I don’t think so,” said Hayes. “I think Sam ran well for the team today. She caused problems, she created chances. I think if you’ve got a striker that’s not creating chances, that’s a concern, but I think Sam’s been outstanding in preseason and I expect that she’ll be on the training pitch tomorrow working at finishing, but I’m not disappointed with anything in her game today.”

“It was definitely a game-changer,” rued Taylor. “It took me by surprise in all honesty. I didn’t think there was much in it but I’ll need to see it again. Obviously then it was going to be different. I thought up until that point it was a close game and both teams had opportunities.”

While those opportunities had been squandered, it was left up to the unlikeliest of players to open the scoring.

There seemed little danger when center back Millie Bright picked the ball up inside City’s half, but seconds later the ball was nestling in Roebuck’s net, who may feel she could and should have done more to keep it out.

It was a sensational strike worthy of opening any season in England’s national stadium, and while everyone else, including Bright, looked surprised, her manager wasn’t.

“I see that from Millie everyday so that’s not surprise for me,” she said. “It might be for others, but not for me. That’s what Millie Bright does. She is the ultimate professional. She works so hard but has all the things in the game to take her to that level — it’s no coincidence or accident. That’s very well-rehearsed by her and I’m just over the moon because Millie is a top, top player.”

Taylor introduced Sam Mewis for an official debut in light blue, but the U.S. Women’s National Team star had been set to come on just before Bright’s opener, and couldn’t have much of an impact with her side a goal down and a player down.

Ellen White was also introduced but with City lacking overall quality in their depth, it was Chelsea’s own substitute Erin Cuthbert who had the final say. There were also debuts briefly for Niamh Charles and Jessie Fleming, as well an appearance for Beth England, emphasizing Chelsea’s strength in depth.

On the Pernille Harder to Chelsea rumors: “I think like any manager in this position, I’d never speculate on other teams, players, and especially considering there’s a Champions League tomorrow, I think that would be completely inappropriate.” — Emma Hayes
With rumors of an imminent arrival for Pernille Harder from Wolfsburg, Hayes could soon claim she has the best attack worldwide, but said the depth available to her was something she’d built over many years, though she wouldn’t be drawn on whether a deal for Harder is forthcoming.

“I think you have to remember that I’ve been here nine years,” said the Chelsea boss. “This hasn’t just happened. I haven’t just assembled the team overnight. This has taken some time to build the quality. I am so lucky to be given the chance to manage at Chelsea and be given the trust by the club to build players that have stuck with me in this process, that have signed contracts to remain at the club [when] lots of them could play anywhere in the world.

“I think it’s a real testament to the football club and to them, and I think for the likes of Millie and Erin, they know what we’re doing here and they are two wonderful team players. That’s what our environment is all about. It’s about contributing to the team.”

On Harder, Hayes added: “I think like any manager in this position, I’d never speculate on other teams, players, and especially considering there’s a Champions League tomorrow, I think that would be completely inappropriate.”

While Chelsea don’t look like they’ll struggle without the Dane, it would be another statement of intent which would cement their status as favorites ahead of the new season.

For Man City, there were promising signs, particularly with Kelly and Hemp causing problems out wide. With Lucy Bronze and Alex Greenwood rumored to be heading back to England next week, Mewis still working her way into the side and Rose Lavelle still to come, there’s no doubt they will continue to push Chelsea all the way.