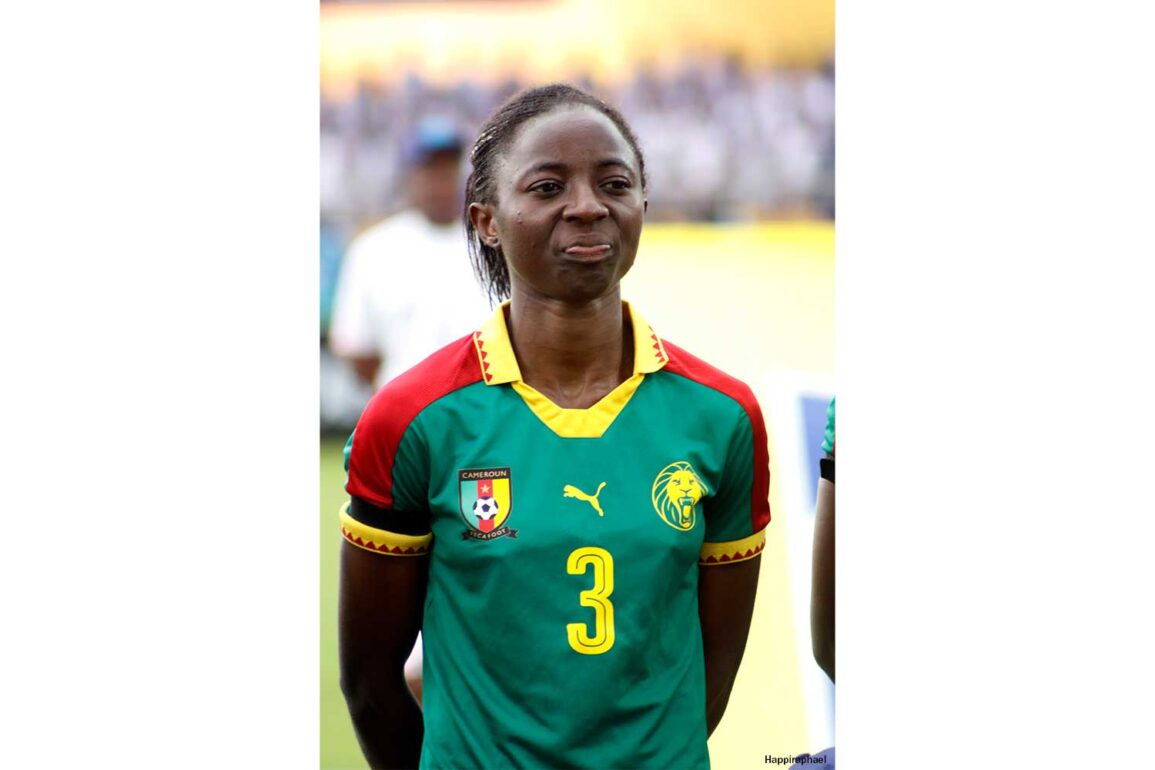 Richard Laverty·
CameroonWorld Cup
·June 23, 2020·8 min read
Share
Before the World Cup, not many parents would let their girls play football because it wasn’t seen as something girls do. Now lots of parents bring their girls to play football and for me, it’s a very proud moment, I’m so happy about that.Ajara Nchout
[dropcap]I[/dropcap]t’s one year today since perhaps the most memorable match of the 2019 FIFA World Cup. Looking at both results and stats alone, there was nothing remarkable at all about England’s second-round 3–0 win over Cameroon, but for those who were there and for the millions more who watched on in amazement, the story was very different.

An array of controversial incidents and close VAR calls led to somewhat of a revolt from Cameroon’s frustrated and emotional stars, each decision against them exasperating the situation further.

The adrenaline flowing through both head coaches in the post-match press conferences didn’t help the situation, and who only knows if conversations continued into the night with both nations sharing the same Valenciennes hotel.

While England had an array of stars and were fully expected to progress, Cameroon had sneaked through with a 95th minute winner from star striker Nchout Njoya Ajara against New Zealand, a moment that would earn the 27-year-old a FIFA Puskás Award nomination.

Nchout was one of many players front and center of the drama. It took less than 15 minutes for the opening talking point but the atmosphere had been set already when Yvonne Leuko was cautioned for an elbow on Nikita Parris.

There was what appeared to be an unsavory spitting incident involving Augustine Ejangue and Toni Duggan, but it was deemed by the majority to be an accidental incident.

But Chinese referee Qin Liang was involved in the first big incident of the afternoon soon after when she awarded England an indirect free kick well inside the Cameroon box, despite it looking more like a miscontrolled ball than anything else.

Nchout takes up the story, reflecting on a crazy 60 minutes or so when the world’s eyes were on two nations.

“Before the match we knew it was going to be difficult because England were used to the latter stages, but we still had the objective to try and win the game,” said the forward.

England compounded Cameroon’s misery when captain Steph Houghton dispatched the free kick into the bottom corner, and the game took on a nothing-out-of-the-ordinary rhythm from there on.

But in the dying seconds of the first half, Ellen White continued her fine form to make it 2–0, with Cameroon players seemingly fuming the goal had been allowed to stand despite replays showing White onside.

Early in the second half amidst rumors Cameroon weren’t going to return for the second half, the game spiraled further when Nchout saw a seemingly good goal disallowed because the player who crossed the ball in had been ruled to be just offside by VAR, sparking further chaos and protests.

It was an incident that brought Nchout and her teammates plenty of criticism, and the forward now admits it was wrong for the players to consider not continuing.

“It’s true that it was a difficult moment. We know in football you have to take it as it is and going forward we know we cannot repeat this kind of behavior again.”

After the match, Lionesses head coach Phil Neville said the match “didn’t feel like football” and sparked further outrage in his post-match press conference. Nchout believes Neville was “too strong” in his criticism of Cameroon.

“Our generation, we wanted to show to the world that our football is a very good level and we wanted our generation of female players to be considered as respected as their male counterparts. He has to understand we are football players, we were there to play football. Our coach was giving his side and everyone was just giving it from their own point of view.”

It is worth, therefore, adding context to the discussion, something that rarely happens in the heat of the moment in a major tournament. Once the dust had settled, one team went home and the other marched on to Le Havre for a World Cup quarterfinal.

For Cameroon, it was just a second World Cup for a nation and a continent still growing in the women’s game and still fighting to gain acceptance.

Nchout is open in admitting the players were there to make their fans and their country proud, to fight for further acceptance of women’s football on the continent, and to provide inspiration for the next generation of girls who don’t yet have the camps or facilities to play football as they would in Europe.

So it begs the question, did the emotion of the occasion come to a boil as Cameroon saw their chances of progressing into the quarterfinals for the first time fade away?

“This could also be a question of education and culture,” she admitted. “It’s very different for every player. Most players I know, they are very different on it and off it. On it, they want to do so well, the emotions are much stronger.

“We wanted to show a good image of women’s football in Cameroon. Maybe it wasn’t that valuable in Africa in the past, maybe in a more comfortable environment there are other things but for many of us, football is it and playing for our country is very, very special. Some players haven’t even finished school yet.”

Nchout added, “In 2015 we were the first African team to get into the second round. We showed to other African teams we can do it, that was very special and we take that very seriously. There is a solidarity, maybe in Europe other teams don’t want each other to do well but we feel an extra sense of responsibility and as countries we support each other.”

Eye Toward Inspiring the Next Generation

At 27, Nchout is one of the senior members of the squad and one of the most recognizable sporting icons in Cameroon, so much so she can barely leave her own home in the country.

“It’s difficult. When I’m back home I can’t go outside, I have to put something on or change my hair or something,” she laughed. “I just can’t go outside otherwise. I know Cameroonians are very proud but whenever I go out they always want to come to me for a photo. They want to touch me, in a morning I would like to open the door but sometimes there are people already outside my door!

“It’s a victory. When I was young, it was just our families watching us. Now the big stadiums in Cameroon, if you tell them it’s a female match there will be 40,000 people who come to watch us. That is a victory for us because it’s a change, people now know who we are.”

Nchout recalls one match, an African Cup of Nations game in 2016, the final against Nigeria on home soil in the capital city of Yaounde. The game kicked off at 3:30 p.m., yet 40,000 Cameroonians were already packed into the stadium by 11 a.m.

“We get messages from people in other African countries telling us it’s only Cameroon who can fill out the stadium for a game like that,” she said.

It’s clear, though, that everything Nchout does now is with an eye toward ensuring young girls in Cameroon have the opportunity to do what she does, but with an easier path than she has endured.

Nchout grew up in a remote community that wasn’t entirely accepting of a young girl playing football. Her family believed education should be her priority, but she carried on playing anyway.

The forward works tirelessly back home to support the underprivileged in Cameroon, and it perhaps shows once again why the emotion was so strong on that day in Valenciennes 12 months ago.

“For us, it was to give our best to make our fans back home proud,” she said. “In terms of myself, I am considered to be one of the leaders in the team and I have a lot of desire to show the young players how much desire I have. I was a young player once and I want them to see they can be like me. Whenever I walk out into a stadium, I think of these kids and what I want them to see.

“I’m very proud of my career so far. Right now, my biggest challenge is to inspire the next generation to take on the baton from me. Before the World Cup, not many parents would let their girls play football because it wasn’t seen as something girls do. Now lots of parents bring their girls to play football and for me, it’s a very proud moment, I’m so happy about that.”

[dropcap]S[/dropcap]o what next? Africa is very much on the up in women’s football and to now has only ever been given a maximum of three spots at a World Cup, but that should change with the next tournament in 2023 set to rise to 32 teams from 24.

It’s clear Nchout will likely further dedicate her life to improving standards back home when she hangs up her boots, and she wants to make sure the Cameroon team continues to go from strength to strength.

“The first thing is to keep encouraging the girls to show their talent. It’s still not accepted everywhere, but if they have that desire, then it should be encouraged.

“Some of us never had any formal football coaching. It’s important now to have very various schools and camps or the existing schools to have more women there and to promote the sport for women. Most of our players just come from the street, so that’s really important.

“We’re really lucky. In my case, I was just playing with the boys and was noticed by my agent at 15. Many children don’t have that luck. The biggest handicap compared to Europe is the education. We don’t have that and you need that to give players an opportunity to encourage their passion, that is the most important thing.”