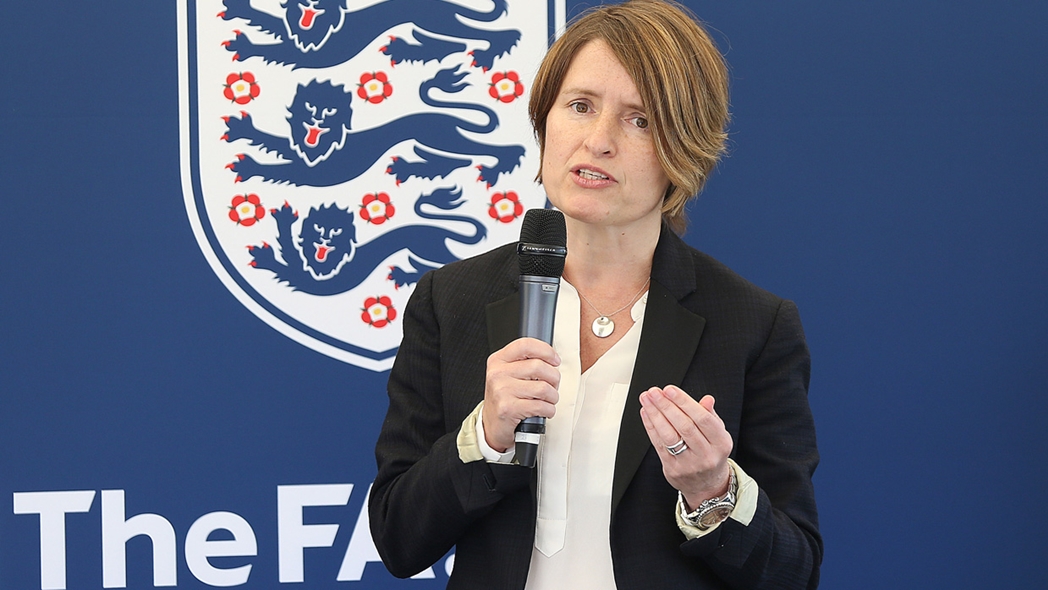 Kelly Simmons, The FA's Director of the Women's Professional Game. (The FA)

Richard Laverty·
FA Women's ChampionshipFA Women's Super League
·June 5, 2020·7 min read
Share
We also spoke to the captains of all the clubs as well, and they had concerns about coming back, so when we looked at it, it was an almost unanimous decision from the clubs to terminate the season and focus resources and effort on coming backKelly Simmons
[dropcap]F[/dropcap]A Director of the Women’s Game, Kelly Simmons, says there was “very little support” for null and void in the Barclays FA Women’s Super League and FA Women’s Championship after the season was decided on a basic points-per-game system compared to the FA Women’s National League, which saw their leagues voided earlier in the campaign.

It was announced on Friday morning that Chelsea and Aston Villa had been confirmed as champions of their respective leagues, with the latter being promoted and former FA WSL champions Liverpool relegated for the first time.

While in Germany, France, and Italy, federations have offered financial support to their women’s teams to help and assist with the financial effects of the pandemic, as well as making sure the season could get back under way in Germany, the same has not happened in England, but Simmons reaffirmed the £7 million per year the FA put into the FA WSL and FA WC remains in place despite cuts throughout the association, while also confirming the Barclays prize money, which is on offer for the first time, will be handed out to clubs in full as planned.

After the FA WNL was deemed null and void in April, some clubs let their frustration be known regarding the decision and the fact neither the FA WSL or FA WC fell under the same banner sparked further frustration after Friday’s announcement, but Simmons offered up an explanation for the difference in decisions on a media call later in the day.

“The professional game, similar to the men’s, is aligned around deciding the season on sporting outcome and issues around promotion and relegation and such,” said Simmons. “The more amateur side of the game decided to null and void, so there’s consistency across the men’s and women’s football pyramid.

“What I would say, having sat on the women’s football conference calls with all of the leagues from Tier 3 and below, is they were unanimous due to a range of factors and they wanted to make an early decision for clarity. Looking at the amount of games played — some hadn’t even played 50 percent — they were unanimous in their recommendation to the women’s football board that those leagues be null and void, whereas when we consulted with FA WSL and FA WC clubs, there was very little support for null and void. We also couldn’t null and void in relation to the UEFA Champions League where we had to use sporting performance from this season to decide the European spots. Consulting with the different sectors of the game is what led to different outcomes.”

On the decision not to restart, Simmons added, “Obviously we were guided by government policy, so we waited for the protocols to come out, initially the coming back to training protocols, and when we had a look at those and consulted with the clubs. There were a number of practical obstacles to the clubs delivering those, in terms of sort of operations challenges, as well as the costs around testing.

“It become clear quite early once we started to assess those protocols that there were going to be a number of challenges, not just then costs of testing. So although we’d been having conversations with the government and football stakeholders about the testing costs, it was quite clear to us from chatting through with the clubs that there were perhaps bigger challenges, around meeting some of those requirements. We also spoke to the captains of all the clubs as well, and they had concerns about coming back, so when we looked at it, it was an almost unanimous decision from the clubs to terminate the season and focus resources and effort on coming back [next season].”

With attentions for both the FA and the clubs now turning to next season, Simmons confirmed plans are in place to start the new season on the weekend of September 5 or 6 while the summer transfer window will open in two weeks on June 19 and close just after the season’s planned beginning date on September 10.

“We had some discussions with the clubs about whether we come back sooner, but we want to give the players a good preseason,” said Simmons. “We’ve always said we’re going to put the players at the center of our decision-making, give them a full preseason, because then they’ve got a full season, the Olympics, a short break, full season, Euros, so we want to protect them and make sure they have a good preseason ahead of them. Talking to all the experts in the clubs we felt that the beginning of September, it’s a FIFA window at the moment.”

Simmons also reiterated that all current FA WSL and FA WC have shown their commitment to continuing next season despite the financial pressures brought on by the COVID-19 pandemic, with planning now centered around clubs getting everything in place to return safely for preseason as planned.

“We reviewed the finances with all the clubs and the clubs are okay in that sense, and I know a number of clubs have come out and re-emphasized their commitment to the women’s game. The next steps now for us really are to work through those protocols. We’ve asked the clubs to appoint COVID officers and medic leads to work with us in the forums and work through the protocols.

“This is the sort of thing — Sue [Campbell] and I were talking to the government on Friday — you know, the picture is changing all the time. By the time the players are coming back to preseason training in July, the protocols for testing might look very different, so we’ve just got to work through those protocols and work through so we can support the clubs.”

One of the main talking points surrounding the return of the women’s game is whether or not games will be played behind closed doors. With no official confirmation yet and some suggestions in the men’s game crowds be back by September in a limited capacity, neither Simmons or Sue Campbell, who was also on the call, would commit to confirming either way whether fans would be allowed back into stadiums, and expanded on how they will use digital media and broadcast deals to enhance coverage if games are to be played in front of closed stadiums.

“In terms of financial impact it does vary from club to club, but we can see what gate revenue is of clubs and what it is as a percentage of revenue and it would be fair to say it’s not as big an impact as some other areas as it is in the men’s game,” Simmons said. “It’s a mix of money that the women’s clubs have got, from their parent clubs, commercial sponsors, FA grants, et cetera, so it’s not catastrophic in that sense.

“It’s really hard to say, obviously Sue and I asked the government on Friday what their thoughts are in regards to behind closed doors. They’re still working through that and whether there is a phased approach coming back or not. They know that the impact that has on football and are keen to open the doors to fans as soon as it is safe to do so. We’ll just have to follow the government guidelines. We’ve planning scenarios that are behind closed doors.”

Campbell added, “There’s two things that we’re really clear about. The first is that being outdoors is a safer place than being indoors, so the bigger challenge for us is not the match itself, but getting people to and from it. The transport, the dressing rooms, they are the most difficult things for us to manage. Once they’re out on the pitch actually in many ways, the advice we’re getting from the deputy chief medical officer is that that’s when people were safest.

“Talking about people coming and going from the game, the issue is not about keeping them the right distance apart but getting to and from the game. Those are the big issues. That’s when there is the greatest danger.”

On TV coverage and further using their own online platforms such as the FA Player, Simmons said, “Our initial plans are on driving people to watch on BT Sport, BBC, and the FA Player and looking at how we enhance content on there so that people can still follow the FA WSL and Championship if they can’t get into the grounds at the start of the season.

“We’ve got BT Sport for another year and BBC, and in terms of the FA WSL, we’ve got all the games on FA Player, but now we’ve got the start date agreed today we will be talking to right holders to see if we can get more coverage.”

The decisions made on Friday now mean the FA WSL remains at 12 teams next season, with Aston Villa replacing Liverpool, while the FA WC will remain at an odd number of 11 teams moving into the 2021–2022 campaign.

Simmons admitted the odd number “is not perfect,” but admitted they will look to correct that at the end of next season and also said there were no immediate plans to open up promotion from the Championship despite the extra competition brought by the relegation of former champions Liverpool.

“The women’s football board have to look at the entire women’s pyramid and, conscious the decision below was null and void, they set a policy by which people can only move outside of promotion and relegation through an application process if divisions are at risk from not having the numbers to compete. We will operate with 11 next season and work with those 11 to get football back as quickly as we can, and at the end of next season we will revert back to two up to get those numbers.”

On expansion plans, she added, “There isn’t any at the moment but that doesn’t mean in the future there won’t be. It’s not in the table currently. Let’s get through this, see the impact of COVID in terms of budgets in professional women’s teams and the marketplace. It’s about expanding at the right pace in terms of the amount of professional women’s teams that have got the funding to be full-time and also about the quality of product and making sure we don’t dilute that in any way.”