Phil Neville Needs to Put Faith in Youth at SheBelieves 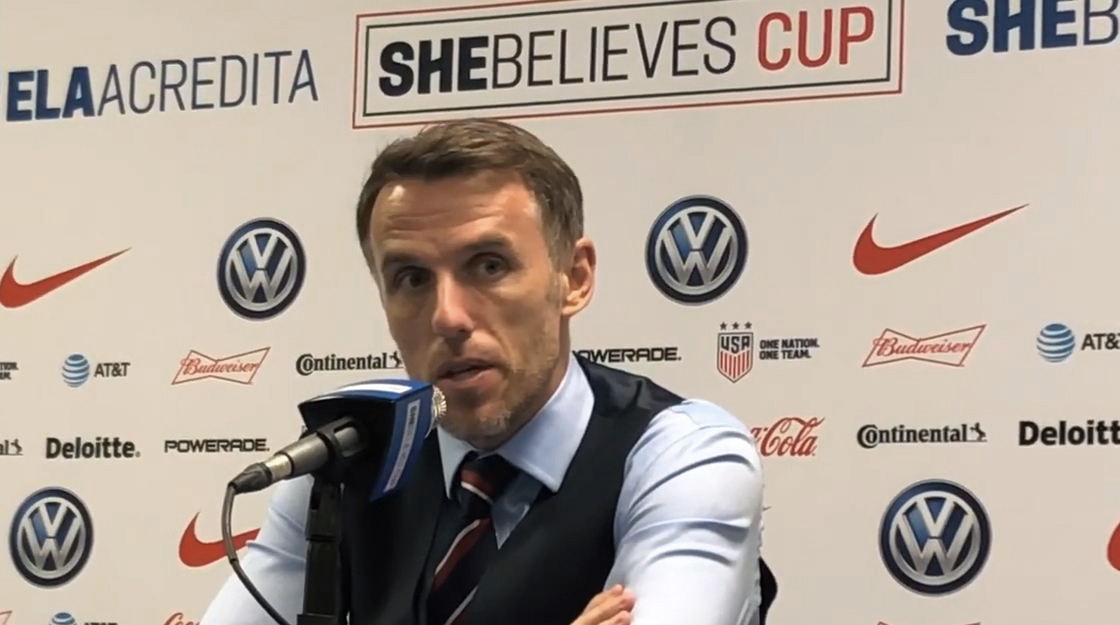 After what became a never-ending whirlwind of international football toward the end of 2019, everybody connected to the Lionesses was probably ready for a break by the time Phil Neville’s England walked away with another unconvincing win in the middle of nowhere in the Czech Republic.

It ended a tumultuous few months for Neville and his side as what had been a promising World Cup campaign ended in two disappointing defeats, no medal, and began a run of five winless games, only ended by a scrappy win away at lower-ranked Portugal.

A home defeat in front of almost 80,000 fans at Wembley did little to ease the growing criticism aimed at Neville and his players, so the break was much needed for everyone as England now prepares to defend its SheBelieves Cup title, the success of which feels much longer than 12 months ago.

With the players at his disposal, it’s difficult to foresee any major changes to Neville’s squad from those selected to take on Germany at the end of last year, but the squad selection and indeed the selected starting eleven to take on the United States in Orlando may paint a picture of what Neville is thinking ahead of the Olympics.

For all the criticism aimed at some of England’s results in 2019 and the lack of defensive cohesion, it’s easy to feel plenty of sympathy for the task Neville has at hand at whittling down his selection for the Team GB Olympic squad, which is looming ever closer by the month.

Just taking the numbers down from 23 to 18 means dropping at least five of his own regular England squad members, and the selection of any players from Scotland, Wales, or Northern Ireland could lead to Neville having to tell at least half his regular squad that they won’t be on the flight to Tokyo.

It’s a thankless task and not an easy one, physically or mentally, for Neville. He can’t work with players from outside England until the summer and has the disadvantage no other head coach does of heading to Japan with a squad of players who won’t have been together long at all.

Neville’s been open enough to admit he will select players from outside his own, but nobody would blame him for keeping changes minimal for the sake of cohesion. There’s also his own relationships with players to think of beyond Tokyo. While leaving out certain in-form Scottish or Welsh players would be controversial based on form, Neville will never have to work with them again and never have to defuse any ill-will felt by a player toward him.

While still 16 months away, Neville also has to start planning for Euro 2021, a tournament England simply cannot fail in in front of their own fans up and down the country. With a large chunk of the current Lionesses squad now the heavy side of 30, Neville has a young core of talented players in his squad already and several more waiting in the wings.

So, while the likes of Ellie Roebuck, Leah Williamson, and Lauren Hemp and have already earned themselves regular spots in Neville’s squads over the past six to 12 months, now is the time to start testing them.

It wouldn’t even be a token gesture. Roebuck, fitness pending after she was seen with a cast on her left ankle on Sunday, has been in good enough form to demand the No. 1 shirt against the U.S. It would not be a case of easing in a young player for the sake of it, it’s a player who deserves it.

Williamson has perhaps deserved a regular spot in what has been a slack England defense for even longer, though Neville’s choice there will surely see rotation across the three games given both Steph Houghton and Millie Bright have been in good form for their clubs, even if it didn’t translate to the national team at the end of 2019.

Hemp, who will likely benefit from the potential omission of the injured Beth Mead, should and probably will be in the squad anyway, but is another whose performances, goals, and assists this season command the spot rather than using it to give her experience of top class opposition in the U.S., Japan, and Spain.

Should Roebuck miss out, which would be cruel timing given her form and 10 FA Women’s Super League clean sheets this season, the continued absence of Karen Bardsley may represent a chance for a Sandy MacIver or a Sophie Baggaley alongside Carly Telford and Mary Earps.

Beyond that, it’s hard to look elsewhere and find many players in consistent enough form to have done enough to give Neville a headache, with Chloe Kelly the exception. The Everton forward has been the undisputed star for the Toffees this season and given Jodie Taylor hasn’t kicked a ball for several months, Fran Kirby is still out after recovering from a virus, and Toni Duggan is only now returning to form, Kelly would be the most unfortunate to miss out.

There’s a wildcard in the form of Manchester United’s Lauren James. The teenager was touted for a call-up as early as last season when Casey Stoney’s side were in the FA Women’s Championship, but James has continued that form and been United’s most consistent presence up top during their step up to the FA WSL.

Given James is set to even attend a senior camp, an inclusion in the squad on Tuesday is unlikely, but don’t rule James out of an Olympic spot or certainly more likely a key role in the Euro 2021 squad moving forward.

There may only been one spot available between backup defenders Abbie McManus and Gemma Bonner, both of whom have had solid seasons, with Bonner particularly never having the international spotlight despite consistent club performances over a number of years.

Beth England is undoubtedly now one of the first names on Neville’s squad list and there’s every argument to be made that the Chelsea forward should be the go-to No. 9 ahead of Ellen White, but either give Neville a top-quality option at the head of his attack.

Neville will hope Lyon’s array of superstars has rubbed off on Nikita Parris after the winger endured a tough end to 2019 when it came to international form, while there will be intrigue to see if Atlético’s Duggan has done enough after a return to form to work her way back into the squad where competition for her position is fierce.