Jen Beattie on Her Return to Arsenal 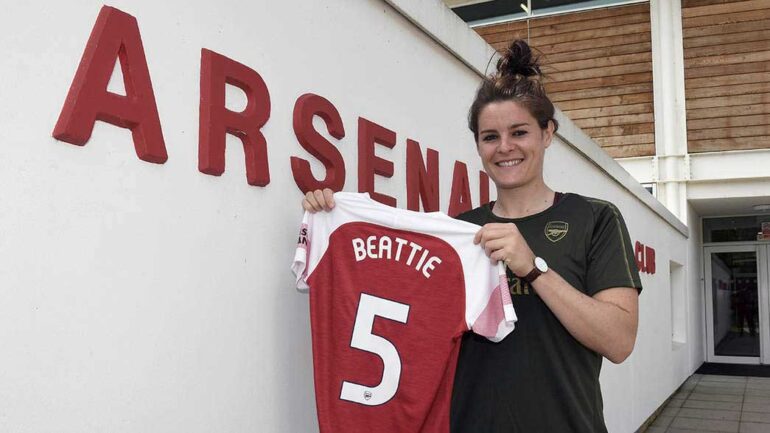 Defender Jen Beattie described the feeling of re-joining Arsenal as “class” as she prepares for her first season back at the club she left behind after winning back-to-back FA Women’s Super League titles in 2011 and 2012.

Beattie embarked on a short period abroad before joining Manchester City in 2015, where she remained until this summer when an approach came from her manager Joe Montemurro to re-join the Gunners, who had just won their first league title since the Scotland international left the club.

“I obviously had some amazing memories from being at Arsenal as a kid and I think I was ready for another challenge,” admitted Beattie. “I’ve obviously worked with Joe Montemurro at Melbourne already, so I kind of knew what he’s about and he’s the kind of guy that anyone would want to work for. So yeah, I’m looking forward to it already.”

Arsenal, with a fresh approach in their first full season since Montemurro replaced Pedro Losa halfway through the 2017–2018 season, took the FA Women’s Super League by storm during the first half of last season, with Vivianne Miedema, Jordan Nobbs, and Daniëlle van de Donk, in particular, leading the charge.

Even when injury to Nobbs and several other players threatened to derail their challenge, their brand of football was still good enough to sweep most teams aside on the way to their first league title in seven years and a return to Champions League football.

Both Manchester City and Chelsea have failed to retain their titles in recent years, but Beattie has the experience of doing so in the first two seasons of the FA WSL, but she’s under no illusion that keeping the squad healthy will be key with extra games due to their European campaign.

“I think, this year, the main thing for us is to stay fit and healthy as a squad because I think when our squad is fully fit there is no reason why we can’t defend the title and go on to win more trophies.”

It’s not like Beattie is walking in as a complete stranger. She has played with several of the team before, whether it be long-serving players such as Nobbs or her Scotland international teammates Lisa Evans and Emma Mitchell, as well as her experience playing under Montemurro in Melbourne.

“That’s kind of one of the main reasons I wanted to move, just to experience a new challenge, and on one hand it is quite similar, I have worked with Joe before, so I kind of know his style of play and what he is trying to achieve in playing football.”

It’s been six years since the 28-year-old left halfway through the 2013 FA WSL campaign to experience the Division 1 Féminine with Montpellier, but now she’s back at an Arsenal side totally transformed after rocky spells under her current Scotland head coach Shelley Kerr and the aforementioned Losa.

The cups kept coming but the FA WSL continued to elude them until Montemurro arrived, and after a spell away, Beattie is open-eyed enough to notice the differences at the club in the six years she’s been away.

“It’s so different,” she said. “As much as there are so many familiarities, it has come on so much as a club. When I left it, we were still semiprofessional, the game was nowhere near professional, and I don’t think we trained at the men’s training ground, or we did in the evenings and sort of did your individual sessions in the morning.

“So to come back into it now at such an exciting time, having won the league, and Joe being in, and all the infrastructure is there — full-time professional, all that stuff — it is like night and day.”

She added, regarding it feeling like a “homecoming,” “I have such amazing memories of being at this club and living in Hertfordshire and studying at the uni here. It definitely developed me massively as a player, playing with the best players in the country and the UK at the time. It was an amazing feeling coming back.”

Not many players swap rival clubs within the FA WSL, but Beattie’s contract was expiring after a successful spell at Manchester City and after losing several key players over the years, the shift of power in the league has certainly pointed toward Arsenal as the new force as Nick Cushing‘s side have seen the likes of Toni Duggan, Lucy Bronze, Izzy Christiansen, and Nikita Parris depart over the past two years.

With Arsenal looking for an experienced and quality center back partner for Leah Williamson, Beattie was always a likely choice given her status, her past history with the club, and her relationship with Montemurro, yet she says modestly that the approach came as a surprise.

“You are always surprised that a very top team will come in and ask you to join, 100 percent. I was massively honored that it was Joe as well, who had worked with me already. When someone who has worked with you already wants to bring you back, that’s the biggest compliment I think that any player can take.

“So, of course, I was massively surprised. They had just won the league and you never know who they would want to bring in.”

There’s a lot to look forward to at Borehamwood this season, so it’s no surprise Beattie is in a jovial mood when talking about the upcoming season.

A difficult preseason has seen the side lose at home to Bayern Munich and Barcelona with another defeat away at Wolfsburg, but they start at home in front of their own fans, have the prospect of a first FA WSL North London derby to look forward to, and a Champions League tie against Italian side Fiorentina.

Ahead of their season opener against West Ham United, who pushed them close in both matches last season, Beattie is only too aware of the importance of a quick start after watching from afar 12 months ago.

“I think Arsenal won the league last year because of their incredible start to the season,” she said. “They absolutely smashed it, I think the opening seven, eight, nine games, and I think any team wants to hit the ground running and that’s obviously what we’ll look to do.”

Beattie is also looking forward to a swift return to the Champions League after exiting the tournament at the first stage with Manchester City last season, but is cautiously optimistic about their chances after a prolonged absence from the competition.

“I think because, obviously, Arsenal haven’t been involved in it for quite a number of years and I think we’re more than ready to be back into it. The Italian league has improved so much as well and developed hugely over the last few years. Fiorentina will be a very tough team.

“For your first year to be back into it, I think, and it’s the biggest cliché in the book, but it would be a bit too far ahead to be thinking about winning it. We have come off the back of winning the league last year and it’s our first season back in, and we’ve been out of it a long time, so we’ll go one stage at a time.”

“I think even it being played at Tottenham’s stadium is huge,” she said. “Us as players can only ever really focus on playing the game and putting on good performances for people to come and watch, but if you put them at incredible stadiums like that and the Emirates, that makes the whole day an even better experience for families and friends that want to enjoy football, but also want to enjoy the experience of being at a match day.”

It’s a new era for Beattie, despite coming back to familiar surroundings, but there will be no doubt in her mind when she walks out onto the pitch on Sunday against West Ham that she’s in the right place for the next stage of her career.

“I think change is always good. I think Steph [Houghton] was the one who always said to me, ‘The only constant in life is change.’ I know it’s a quote, but I was ready for something new and when this opportunity came up I jumped at it to be honest. I was ready to experience Arsenal again, but in a different way.”

If Arsenal is indeed to defend their league title, compete in the domestic cups, and in Europe too, they will no doubt be looking to Vivianne Miedema to somehow replicate the stunning form she produced last season when she smashed the FA WSL goal record for a single season with plenty of time to spare.

Miedema is already rated as one of the top strikers anywhere in the world and Beattie is already familiar with playing against her, so it’s no surprise the Netherlands striker is the player she’s picked out as someone she’s been extra impressed with during preseason.

I’m not normally surprised by that, because I have always said when you train with someone you really appreciate how good they are.”