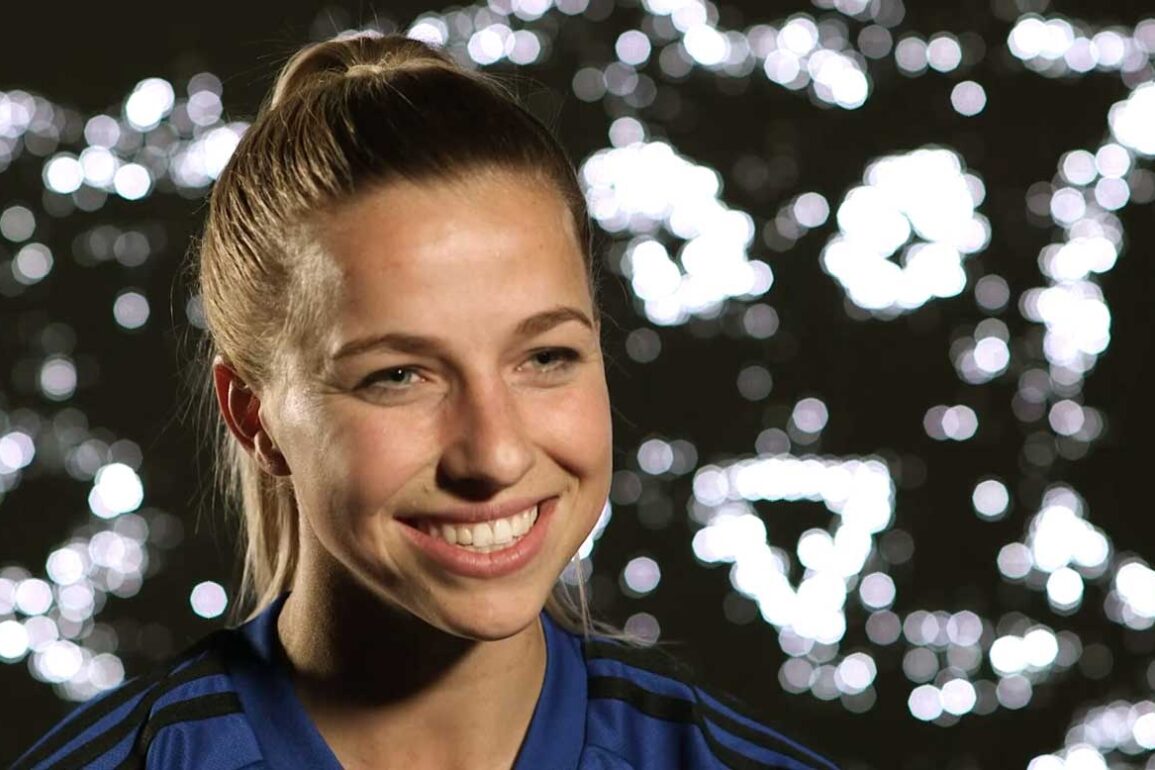 “It’s going to be a massive start isn’t it?” enthused new Manchester United midfielder Jackie Groenen. Her infectious smile and love of the new chapter in her life and career obvious as she returns to England after a brief spell with Chelsea earlier in her career.

Groenen, a key player for the Netherlands during Euro 2017 and the 2019 World Cup, was Casey Stoney‘s marquee signing this summer as United make the step-up to the FA Women’s Super League, but speaking to Groenen, it’s easy to get sucked into the belief you’re simply having a chat with an enthusiastic fan rather than someone who has just graced a World Cup final.

Stoney talked of the “Dutch mentality” when queried on what Groenen brings to a young changing room, but the midfielder certainly reads the room well when asked what she thinks her manager is specifically talking about.

So, why United? For a midfielder who has been a little off the club radar recently as FFC Frankfurt struggled to keep up with Wolfsburg and Bayern Munich in Germany, Groenen’s rise to prominence largely began at her home Euros two years ago, where she played a pivotal role in the success of her country, and she backed that up with the crucial semifinal goal against Sweden that sent her team to the World Cup final this summer.

It’s likely Groenen had other options given she was out of contract in Germany, but she can’t deny she’s always been a “little bit” of a Manchester United fan.

“The main reason for me was the mentality of everyone around this club. You walk in and you feel it is about winning and I have always had that in me as well, I like to win games obviously, which is one of the main reasons to play. Ever since with the Dutch team has been winning some things as well you kind of get addicted to it. I have been feeling like I keep wanting to win things and you can feel that mentality in the club, so, for me, that was one of the reasons as well to come here and I think Casey really fits that profile.”

Groenen lives in Salford Quays and says she can see Old Trafford from her apartment window, so there’s always a constant reminder of what she’s representing and the history of the club she is now a part of.

It has, though, became evident quite quickly that the 24-year-old is only too aware of the size of the club she now represents.

“I have always been a bit of a Manchester United fan so I know bits and pieces about it [the history], but obviously I have watched a lot of videos about the club and the history and that is part of the club — it is a big history club. I am living right next to the stadium as well so I can see it.”

The midfielder is returning to England after a four-year absence, leaving just before the last World Cup in Canada and returning with her profile now sky high.

She joined Chelsea at the start of the 2014 season but left 18 months later to return to Germany, where she would remain until Stoney started work on recruiting her late last year.

When asked how she’s changed in the years she’s been away, Groenen can’t resist but smile and throw out one of her deadpan jokes, which she so often starts sentences with.

“I have grown older!” she laughed, before she added, “I am a bit more experienced now than I was at my time at Chelsea. It was the first time for me to leave home as well. I have obviously been playing in Germany before that but I was still living at my parent’s house so it was the first time I was moving out, living by myself. I feel like I have grown as a person and as a player as well, maybe I am a bit calmer than I was before.

“When you make a decision like that [moving clubs], you go through the leagues and sum up the plus and minuses, but to be honest, I didn’t have to think for long when Manchester United were interested, it was quite fast.”

She’s also not oblivious to the big changes the league has undergone in the time she’s been away playing in the Bundesliga.

“I think the league has changed massively. Back in the days when I was at Chelsea in midfield I felt like the ball was just going over me, flying up and down, and I was just standing there. I feel like that has changed a lot, the level has gone up quite a bit and the press and media interest has gone up in the league since I left.

Groenen is only too aware that despite joining a club like Manchester United, she is also joining a club that is new to the league, only 12 months old and not expected to be challenging for major titles for another couple of years.

For someone who has won the European Championships and played in a World Cup final in the last two years, Groenen may have to be patient for her next bite at success, but she’s not worried and said there’s no timeline for success.

“We haven’t really been concrete about this. It hasn’t been like, ‘This year, we want to do this and that,’ it is more about steps as a team, I think. It is more this season as a team we want to do this and we want to be able to do that. You have to be realistic about things as well, it is the second year, the first year in the top league, so I am not here with the idea in my mind like in the first year we are going to win everything and the Champions League — it is not like that.

“It is a process. I think we have quality in the team, we can still grow as a team, I think we can do really well. We will put things down internally as a team as to what we want to do but we haven’t really been like, ‘This year we want to be up there.'”

Groenen is one of six new players Stoney has brought in to help bring a young but talented squad closer to the level they will need to reach in the FA WSL.

She’s been joined by Swede Lotta Ökvist, as well as Jane Ross, Abbie McManus, Mary Earps, and Hayley Ladd. Groenen did join her new teammates on their tour of Norway after the World Cup and it appears she’s had no problem settling in to life at her new surroundings.

“I basically came straight in and went on the tour to Norway, so you are 24 hours together and that was the first week of getting to know everyone and everything. I had two or three weeks off, but I’ve had three or four weeks where I have been getting to know the team and it has been going really well. They are a very nice team, I like the team, they are all very close together, a bonded team and everyone gets along very well.

“I like the mentality of the group, there’s basically no complaining, which I have never really experienced in my life before! Everyone gets in and does their thing and there is no moping about. You can tell it is a group that want to go forward and you get that mind-set as soon as you walk in, you want to do well, and I feel like everyone feels that. There is work to do in a way, so everyone comes in and training is hard and intense and I have been really liking it.”

Groenen is relieved she hasn’t had to take part in the dreaded initiation yet. “I am hoping that is not a thing here! I haven’t brought it up I have just been trying to ignore it,” she said.

However, the squad has done plenty of team bonding, including a sumo suit wrestling competition, which should have been no problem for the former European judo champion.

“Before we started I was bragging!” she laughed. “I was like, ‘Guys, I’ve got this, I am going to win this,’ and it was first round and I was out!

“I am a very lightweight person and I was on the ground and I couldn’t get up. It was a lot of fun to get to know everyone, it is nice to do something else every once in a while to get your mind off it and get to know people off the pitch. We go out for dinner or we go and play ping-pong.”

The Derby and Surpassing City

Groenen’s first taste of domestic women’s football in England for four years will come when she steps out onto the Etihad pitch in front of more than 20,000 people to make her official Man United debut.

Groenen has scored against Nick Cushing’s side for both Chelsea and Frankfurt and is looking forward to a good game, but isn’t expecting the sort of rivalry the two teams have in the men’s game straightaway.

“The vibe in women’s football is quite different to men’s games up until now,” she said. “It is actually one of the things people have been really complimentary about. When you play with Holland, for example, and you play in big stadiums, it all feels very friendly and it is one of the nicer things about women’s football.

“You can still see kids sitting in opposite shirts next to each other without having any trouble. Obviously, Manchester United versus Manchester City there will be some rivalry, I can’t really tell because I haven’t experienced it yet but it is not a normal game, there is going to be some tension on the pitch, and hopefully it will be very clean off the pitch.”

And as for the long-term aim of not catching but surpassing City, how much is the team thinking about that going into the season?

She added, “It is all we have been talking about for three weeks — ‘Let’s smash City, get that out of the way.’ It is not going to be the easiest game to start with, it is a big team and they have been doing well for years and in the Champions League as well, but it is a massive game for us. I always look at games one at a time, you can win any game, it doesn’t matter who it is.”