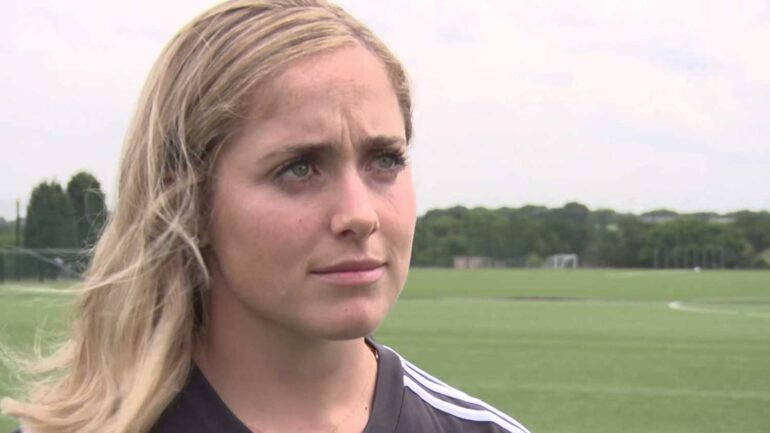 Brianna Visalli says her short time at Birmingham City has been “wonderful” after signing for Marta Tejedor‘s new-look side after a season at West Ham United.

The United States Under-23 international was brought to England last summer by Matt Beard, who was familiar with Visalli from his own spell in the U.S. with the now defunct Boston Breakers in the National Women’s Soccer League, shortly after she’d been drafted by the Chicago Red Stars.

The 24-year-old was a regular during West Ham’s first season in the FA Women’s Super League and is now looking forward to a new challenge with the Blues.

“From the players and staff, it has been class do far,” she said. “I’ve really enjoyed getting to know everyone, coming to work knowing training will be intense and challenging and learning a lot.

“I have been learning about myself as a player, trusting who I am as a player. It is all because of Marta and how she coaches us, she trusts us to make our own decisions, she wants us to be intelligent footballers. I have grown a lot already taking ownership of who I am as a player. The whole environment has been geared towards working hard and that is something everyone can look forward to this year knowing that Birmingham will keep its same identity and I can guarantee that much.”

Birmingham’s squad has undergone somewhat of a facelift during the offseason, with several key players departing including Ellen White, Aoife Mannion, Hayley Ladd, and Charlie Wellings, while Visalli is one of several new faces coming in the other way.

But after joining a West Ham side 12 months ago that was largely building an entirely new squad from scratch, she’s not unfamiliar with the changes going on in Birmingham.

“It’s the same situation as last year essentially, so I think I am better prepared to help with the process having been through it last year, but it is exciting as it leaves the possibility for the team to be molded in a way the players want to identify with.”

Visalli is honest enough to admit that staying in the FA WSL wasn’t perhaps top of her list when she arrived in the country 12 months ago, but admits the progress of the league and the game in general within England played a big part in convincing her to seek her next challenge within the same four shores.

“I did have a different idea when I came to this league what I wanted from it, but after my first full season I changed that idea,” she said. “I had the intention of coming, building a reputation, then returning back home, but I found midway through the season I was growing and developing so much as a player it was foolish of me to think, ‘Just get what I need and go.’

“There is so much more for me to learn, and I think there is unfinished business for myself personally. I didn’t have the impact I wanted in terms of how I can impact the team, so when I had the choice to stay or go somewhere else that was a huge factor in what I had done and not done, so to speak.”

Visalli originates from San Jose, California, but her mum is from Suffolk and Visalli qualifies to represent England should the opportunity ever present itself in the future.

The 24-year-old played against England in last year’s Nordic Tournament and hasn’t ruled out switching allegiances if she were to catch the eye of Phil Neville or any of the England youth team coaches.

“I played in Nordic Cup in October and England were there in the same hotel,” she recalled. “I chatted to some of the managers, which is when the conversation about switching started. If you switch at Under-23 level you can’t go back, so we’ll see.

“I rated England really highly in the World Cup, it was weird they [U.S., England] all drew in the same half of the draw as France. I felt bad a bit [when England lost to the U.S.], but as a player wanting to come in you don’t want them to be stellar! You know, I felt bad for them, but I think they are great. They got unlucky in terms of their draw.”

With her strong American accent still intact, Visalli’s not too worried about understanding the Birmingham accent, joking she had Matt Beard’s “cockney rhyming slang to contend with” throughout last season.

Visalli’s been on quite the whirlwind journey in the past few years, going quickly from college student to graduate to NWSL player to FA WSL player in a short space of time.

With several of Birmingham City’s new signings, including the likes of Lucy Whipp and Rebecca Holloway, coming straight out of the U.S. college system, Visalli is well placed to offer advice on how they’ll find the step-up to professional football.

“The transition was crazy,” she admitted. “I went from college, full-time student, to full-time athlete, I even nannied on the side, I used to ride from one job to the next. Then when I was at Chicago I was like, ‘Wooh, I need to make money and pay my bills.’

“Now I feel like an adult. ‘What am I doing? Do I take coaching courses, get a barista job? — I don’t need to, I have a job,’ so I am filling my time with jigsaw puzzles!”

She adds, “The biggest challenge is confidence and understanding you belong in that environment. They don’t know what to expect in terms of who’s on what team and how they play. I can help them be patient through it, it is a step-up and a different type of game to the American system; confidence is something for me in my journey I can relate back to them they would probably struggle with.”

Expectations ahead of Birmingham City’s opening game against Everton on Sunday are measured compared to previous seasons. While key players have moved on, parts of last season’s team are still in place and their home ground at Solihull Moors has been renovated ahead of the new season.

Visalli is candid when discussing their realistic aims for this season, putting faith in the club’s “identity” when it comes to challenging the top sides again.

“I think every team goes through this kind of process, but I also think the identity of how Birmingham has developed players and always having top, top finishes speaks for itself — proof of the pudding. There is a philosophy. There is an identity which can supersede losing some of the bigger names.

“They have always turned out these amazing players then unfortunately can’t retain them and lose them to Arsenal, Chelsea, Man City, that is part of the process. They grow these players, then they move on, but everyone speculates as there is so much change but I firmly believe it will still be a quality side — I would not have signed if not.”

On the club’s ability to maintain key players in the future, she adds, “It is easier said than done. We all know the answer is financial, it’s hard when you have Man City trying to buy your players, or Chelsea.”

It’s certainly not dampening Visalli’s obvious enthusiasm for the new campaign. “I’m loving Birmingham. Each day is a new challenge. I really only have work, the fact work’s great is awesome as I don’t have a family, dog, or personal life to go home to, just soccer — or football!

“I am not in this business for money or fame. I am in it because I am passionate.”