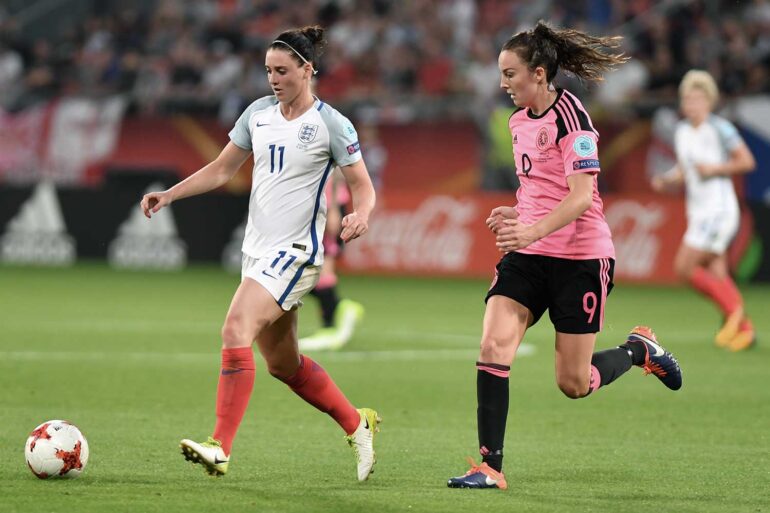 England midfielder Jade Moore has questioned whether the Football Association needs to look at the start date of the FA Women’s Super League in future seasons with this year’s opening games coming just four days after the end of an international break.

The Reading player was selected for Phil Neville’s first camp post-World Cup but has since had to leave the squad with a thigh injury, further emphasizing the perils of an international break so close to the start of a new season.

“I don’t think the international windows change — I don’t think they’ve ever changed,” said Jade Moore. “If that stays the same then the only thing that has to change is the league, and I think pushing the league back one week wouldn’t exactly be moving houses would it?

“For me, I just feel like I’ve been back with Reading three or four weeks and it’s actually not a lot. Now I lose a week, I’ve probably had five weeks with my club that I’m going to go and start the season with. It’s not a lot really when you think about it.”

Moore believes that it “one hundred percent” will frustrate Reading manager Kelly Chambers, as well as other managers similarly affected around the league.

“We arrive back Wednesday, probably have Thursday off so players will be in Friday and we play on Sunday. Two days…”

It’s somewhat apt that Moore has picked up a thigh injury on camp since speaking to the media about the issue last week, in which the 28-year-old said players just want a more even spread of games to avoid the risk of injury ahead of the new season.

“As players, we want more games, but we also want it to fit better,” she admitted. “We don’t want it to be an increase in health risk. If you get to all the cup finals you’re probably playing about 30 games and 30 games is still not a lot compared to what the men do.

“But, if we’re cramming 15 of those games into two months it’s different, isn’t it? You can play eight games in six weeks and you’re like, ‘We’ve just played a tournament.'”

Part of the increased demand comes with the reintroduction of the Continental Cup group stage, which now offers most clubs five extra games a season compared to the straight knockout format that was used up until two years ago.

But once again Moore says she doesn’t have a problem with the extra games as long as it fits in sensibly, going as far to say she actually likes the prospect of midweek games.

“I don’t know who does the league or how they plan it out but I never understand how we don’t have enough weeks in the year to play a game every week. I actually really like playing midweek because it breaks my training week up, it doesn’t make it so monotonous.

“For a normal Sunday game you have the same training schedule week in, week out. When you have a game midweek for a player it’s brilliant, the week looks different, got a day off here, got a day off there!”

With the change back to a winter schedule in 2017, many players have gone through a demanding schedule that  meant ending the last summer season in 2016, going into a Spring Series, followed by Euro 2017, two full winter seasons, and most recently, the World Cup in France.

And Moore believes injuries are inevitable with such a demanding schedule and believes the FA should consult players to get an “overview” of how schedules vary depending on which club you play for.

“There will be players that if they’ve not got injured, they’ll go 18-, 24-month cycles where they’ve never had probably more than seven days off,” said the midfielder.

“I think, probably, having an overview of how players feel at a certain club, because clubs have different schedules [to each other]. The top two that are in the Champions League, their schedule for the year will look very different to ours and then the amount of players who are away on international breaks, then their cup draws because they’re likely to go further.”