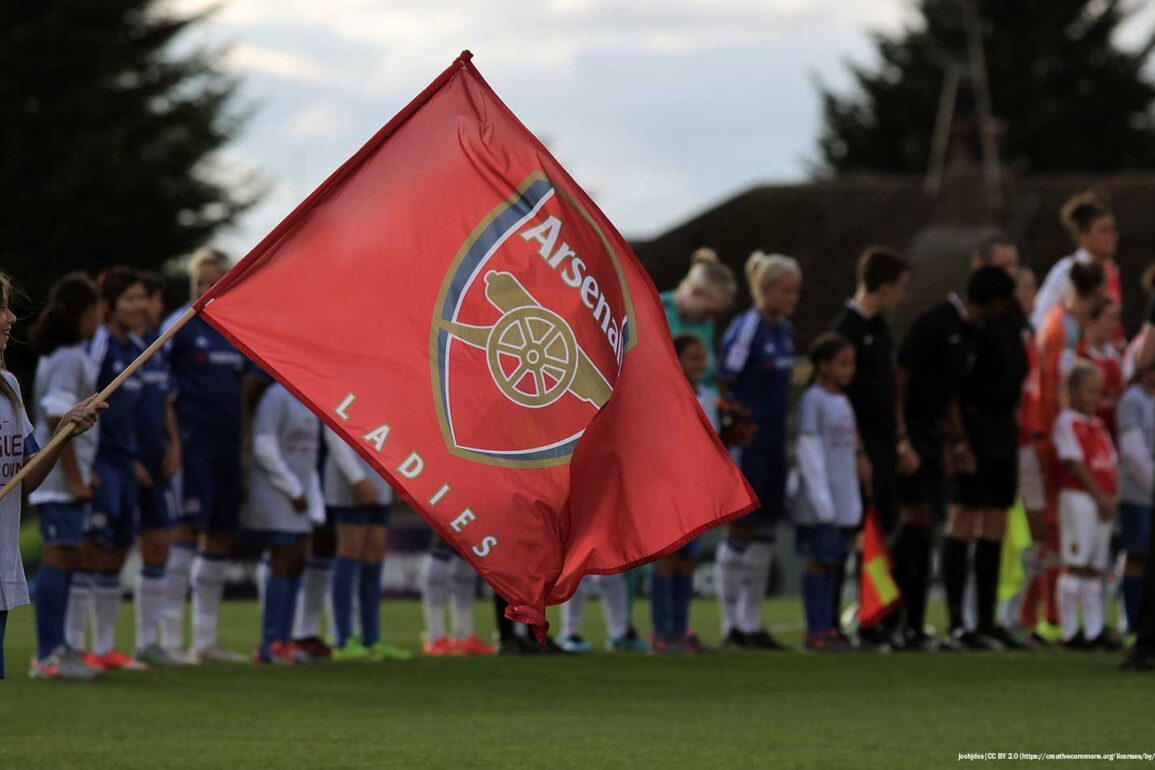 It should have been a day of much positivity for FA Women’s Super League champions Arsenal: The trophy they obtained at the end of last season, their first league title since 2012, was safe in the arms of Daniëlle van de Donk on the Emirates Stadium pre-match as Joe Montemurro’s side prepared for their first game at the club’s main stadium since the start of 2013.

But football is so often a cruel game. Less than four weeks on from the memories of watching England crash out of the World Cup in Lyon, the pained silence around the ground when forward Danielle Carter went down clutching her knee was eerie and heartbreaking.

Carter, who ruptured her ACL in her left leg on the final day of the 2017/18 season, missed the majority of last season and Sunday’s friendly with German side Bayern Munich was her first start since returning to the squad. Melanie Leupolz’s first-half header had all but sealed what was, in truth, a more than low-key encounter before Carter’s right knee appeared to buckle in a 50–50 challenge in the middle of the pitch.

In a matter of seconds, concerned teammates circled the distressed forward, frantically signaling for the physios, who immediately administered gas and oxygen to a player who appeared to be as traumatized mentally as she was physically.

Montemurro, too, knew the gravity and tragedy of the situation as he immediately placed his hands on his head, the realization of what was unfolding before his eyes soon dawned on everyone else within the stadium. While there will be no confirmation until Carter has had the relevant scans, we’ve all seen the telltale signs far too often in the women’s game that anything less than another ACL injury, this time in her right knee, would be a huge bonus.

“I went to have a chat with her,” said the Arsenal manager post-match. “We’ll get some scans done and have a look. She’s pretty distraught at the moment but we’ll wait and see before we confirm anything.

“She’s devastated because she’s an important part of the group, she did so well physically and mentally to get back, she was doing well in preseason and to have these setbacks is always difficult. We hope for the best.”

Arsenal captain Kim Little, who herself suffered an ACL injury in 2017, knows only too well the physical and mental pain that comes with the injury and said after the game sher and her teammates would be there for Carter if the worst was confirmed.

“I saw her after and obviously she’ll have a scan first,” said Little. “She’s very sad right now, as we all are, and we’ll all be there for her.”

The game became insignificant as the final minutes ticked by and the lack of any meaningful action in the 80 minutes that went before meant it became only too easy to focus on Carter’s injury.

Arsenal, though, handed debuts to Manuela Zinsberger, Leonie Maier, and a second debut to the returning Jen Beattie, while there were rare starts for Viktoria Schnaderbeck and Tabea Kemme, who both missed the majority of last season through injury.

Understandably, Arsenal didn’t look as sharp from the off as Bayern, the latter of whom have been in preseason longer than the Gunners, who only returned to the training ground last week.

With minutes in the bag for many players aside from the club’s English and Dutch starts, Montemurro was generally happy with his side’s first test of preseason.

“It’s always difficult to play against a team of that caliber first up but the most important thing is that we want to be playing against the best teams and challenging the best teams. You could see they’d been four or five weeks in training and we’d been a week and a half in training.

“From the physical perspective, we wanted to get some minutes for certain players but there were certain patterns we wanted to start the process on and the quicker we get into those the earlier the new players will integrate into the style of play.”

With FC Barcelona still to come at the club’s regular home ground at Borehamwood next month, the Australian admitted such top-class opposition was pre-planned ahead of the club’s first Champions League campaign in five years.

“That’s part of it,” he admitted. “It was done on purpose. We want to play the best teams and we can only know where we’re at and realistically know where we have to grow by playing against the best.

“That’s why it was done on purpose. We’d probably have liked another couple of weeks but it was important to give the players who went to the World Cup a good rest.”

Scotland international Little also admitted there was some fatigue among the group given it was their first match of preseason, but believes there were positives to take with many players getting valuable minutes.

“You could see the tired legs at the end,” said the Scotland international. “You could tell it was a preseason game, just the way it slowed down at times. I think Bayern are a great European team but it was good for us to introduce some of our new players. We’ve got a lot of players still missing but there’s lots of positives to take.

“We’re enjoying preseason, our English and Dutch players come back this week and we’ve got a great squad here, I can’t wait for the new season to start.”

There was more positive news on the injury front with Montemurro suggesting Jordan Nobbs, who has also been out with an ACL tear, could be back in time for the team’s first FA WSL game of the season against West Ham United on September 8.

“Jordan’s doing really well,” said Montemurro. “She did a full session, a light session this week, she’ll grow and we believe she’ll be ready for the first game of the season.”

The defeat to Bayern Munich formed the first part of Arsenal’s annual Emirates Cup, with Unai Emery’s men taking on Lyon an hour after the women’s game had finished.

The club announced a peak of 28,000 supporters inside the ground for the Bayern encounter, although it looked a lot less for the majority of the game, but Montemurro and Little were both happy the event was able to take place.

“It’s a great adventure,” said Montemurro. “We’re honored and pleased and we thank everyone for making it happen. It was a great occasion for the girls and long may it last.”

Little also sees no reason such occasions can’t happen again in the future. “I think it worked fine. It’s obviously very special to play somewhere like the Emirates so we’re very appreciative of that. To play in that atmosphere and to get a feel for a big occasion is something that I think can be done more often and I thought it worked very well today.”

The match also marked Jennifer Beattie’s first game for the club in six years after the center back returned to Arsenal after a four-year spell at rivals Manchester City.

Beattie decided to leave the FA Cup and Continental Cup winners for a return to the FA WSL champions at the end of her contract earlier this summer and the defender is looking forward to getting back into the swing of things at her former home.

“Your first game back to be at the Emirates, it doesn’t get much better,” she smiled. “It does feel very different. So many clubs in this league have progressed in so many ways. The club structure, the people they’ve brought in, I’m very happy to be back.

“I’ve known quite a few players from playing in this league, I worked with Joe in Melbourne and it’s a huge test here but it’s one I look forward to.”