Steph Houghton on Her Evolution as England Captain 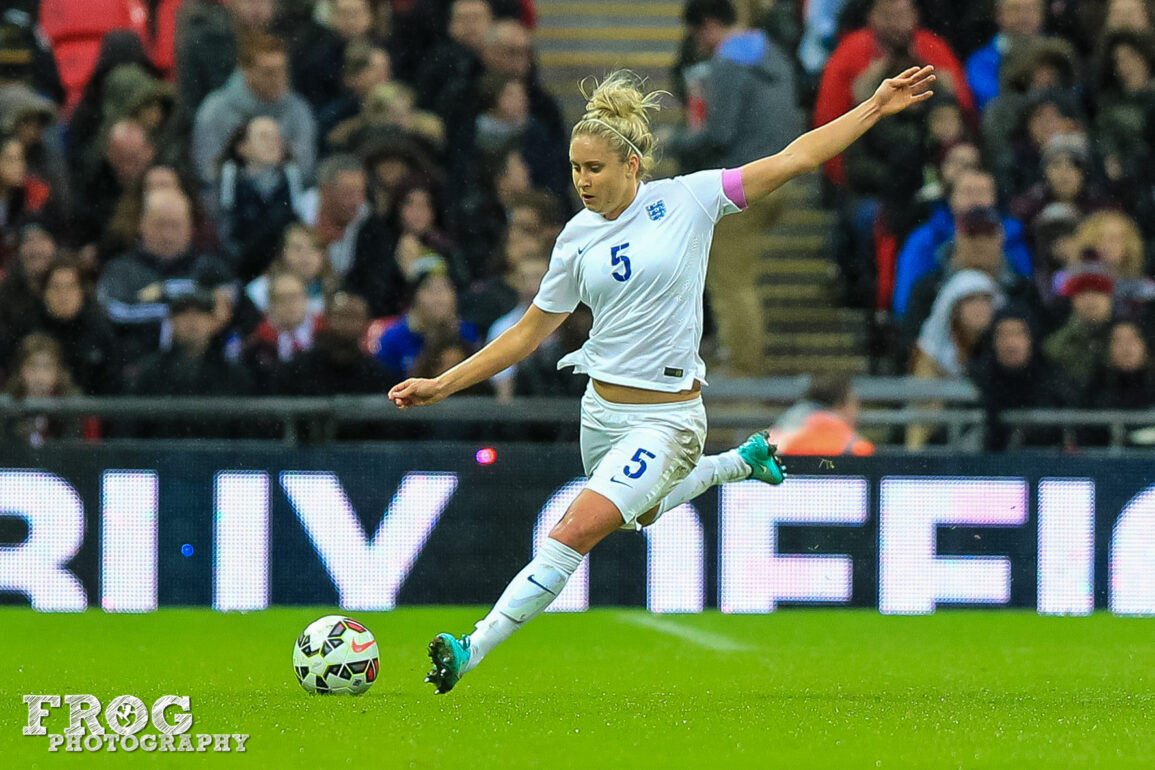 Steph Houghton says the day she received the England captaincy from former head coach Mark Sampson was the best day of her life.

Houghton replaced Casey Stoney shortly after Sampson replaced Hope Powell as England head coach at the end of Euro 2013, with the Manchester City defender holding the title ever since.

The center back admits the new role took its toll in the first few months, but she’s grown into leading the team over the last five-and-a-half-years.

“That first six months, I don’t think I performed my best, but I think that was something I probably had to go through in a learning curve in terms of trying to develop into the captain I want to be today.

“It’s taken a long time in terms of perfecting that and being comfortable with how I am, but at the same time, there’s a lot of work that went on off the pitch that people probably don’t see, the conversations you have. I feel as though I’m comfortable in that role and it really brings out the best in me as a player and a person.”

Houghton has led her team through a World Cup in Canada and the European Championships in the Netherlands, helping to reach the semifinals in both and bringing home a bronze medal in the former.

Houghton has grown into a leader on and off the pitch and has become one of the most recognized faces in women’s sport in England, and she admits her role has changed as she’s gotten older and she’s the one now looking out for the youngsters.

“For me, it’s first and foremost putting the team first and making sure the girls are happy and they’re comfortable with the processes we have, the way the schedule is, to be able to challenge people on and off the pitch.”

She added, “An example of this tournament is the youngsters that have never played in a senior World Cup. I think it’s about putting an arm around them, showing your vulnerability in terms of how you felt in 2011 when you were part of your first World Cup, you played 20 minutes and had to sit on the bench and to wait for your moment.

“For us to relieve that experience — not just me, but Jill Scott, Karen Carney, Toni Duggan, Ellen White, etc, they’re all unbelievable and they’ve had so much experience at this level that it would be a waste not to share that with the youngsters.”

Houghton can still recall the moment she was called by Sampson to a meeting where she would be given the news she would become the new captain of the Lionesses.

“It was in St. George’s Park,” she recalled. “I think he messaged me one night at about half 9, 10 o’clock to ask if I could come and have a meeting with him in reception. I think I asked him twice if he was actually being real. That’s one of the best conversations I’ve had. Mark trusted me to lead the girls through all the success we had under him and when Phil came in and pulled me out straightaway to tell me not to worry, that I was still captain, he told me just to play as well as I could for Man City and England and I feel as though I’ve done that.”

While Houghton takes on the role of captain very well, she isn’t the only person within the camp with responsibility.

There has always been a leadership group that is the calling point for concerns within camp and is generally made up of the more experienced players in the group.

For this tournament it includes Houghton, Scott, and Carney, as well as the likes of Lucy Bronze, Karen Bardsley, and Carly Telford.

“We know we have to keep pushing and driving the group forward,” said the captain. “Sometimes it’s just about having a coffee and not saying anything at all because everything’s okay, but sometimes there is and we have to make sure everybody’s okay.”

Houghton admits it’s not in her “nature” to tell players off but says any player will raise their voice a little on the pitch if someone needs a talking to.

She describes herself as “not really a confrontational person” and prefers to talk things out to an extent everyone involved can come to a satisfactory conclusion.

Now 31, Houghton has entered the back half of her career and with so many young players coming through, she believes there are many who could take her place one day.

“Keira [Walsh] has had it, Lucy is vice-captain, there’s Leah [Williamson], we’ve got so many people who could wear the armband.

“We’ve just got to enjoy tournament football, they will deserve it whoever gets the captain’s armband. We’ve got so many leaders. Okay, I’ve got the armband, but I have some other players around me in the leadership group.”

As captain, the Manchester City defender is only too aware most of the pressure is on her as England looks to go a step further than 2015 and 2017 and reach the World Cup final.

She is in the media and the public eye more than any other player, but she admits criticism often comes from closer to home anyway.

“I knew there was going to be pressure on me coming into this tournament,” she admitted. “I knew you guys would be writing about my performances more than anyone else, but that’s not a problem because I have my dad telling me about my performance every single game and he is my biggest critic! I trust everything that he says.”

It hasn’t always come so natural to someone who is now viewed as a born leader within the team. Houghton admits she had to sit down with people during her early days as captain because she was overthinking so many things and worrying about things she had little control over.

“The first couple of years were more difficult,” she said. “I was asked what I was thinking about and there were so many things going around my head, I was taught to worry about the things I can control: that was my performance on the pitch, improving as a center back, and leading by example.

“I added all those things together: I worked on my communication skills, how I wanted to carry myself around the group, to be confident and professional, working on the footballer I wanted to be, blocking out negative comments on social media. Shutting out all that and focusing on myself and what I needed to do.”

The Manchester City captain has seen a lot of development both on and off the pitch in her time as England captain.

When she took over the role, the Lionesses were licking their wounds after a disastrous Euro 2013 where they went out in the group stage after not winning a game and had lost their long-serving head coach in Hope Powell.

Now, the expectation is sky high after two semifinals in a row and it seems expectations within camp have rocketed too, with England now knowing there is no limit to how far they can go after three wins out of three saw them top Group D.

“I think for the last five years, we’ve been working on what we are today,” said Houghton. “We wanted to top the group, we wanted to get three wins out of three, and we’ve certainly done that. For me, it’s frightening, we probably haven’t reached our potential in this tournament yet. We keep getting better in different ways in different games. Against Japan, we defended quite a lot but we were hard to break down and we’re going to need that in this tournament.

“At the other end, we were very ruthless and clinical and Ellen scored two fantastic goals. So, I think we’ve shown different sides to us. I think the way we play is totally different to 2015 as well. We’ve developed that over the time Phil’s been here.”