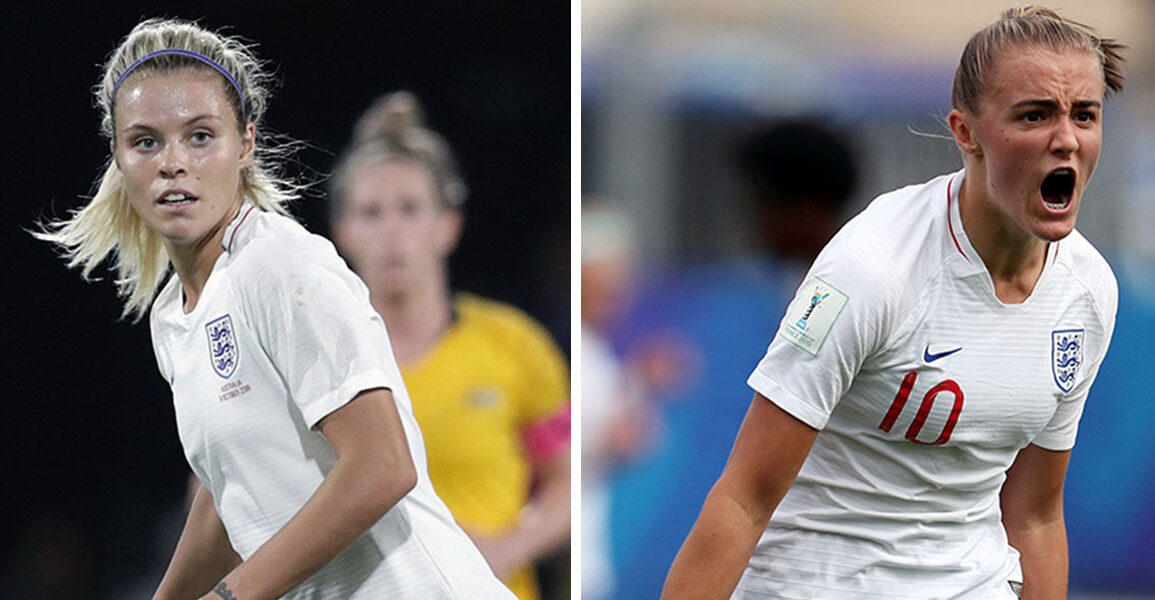 Rachel Daly and Georgia Stanway of England. (The FA)

Rachel Daly and Georgia Stanway both reflected on England’s Group D win against Japan that secured top spot and a second-round encounter against a third-placed side in the tournament.

Both Daly and Stanway were making their first World Cup starts and both played in a big role in England’s 2–0 win.

Daly, playing further forward than usual on the right wing, was one of the star performers throughout, regularly troubling Japan’s defense and was probably unlucky to not be named player of the match.

Stanway, who was part of the England Under-20 side that won a World Cup bronze medal in France 12 months ago, was solid throughout and played a perfect through ball for Ellen White’s first of the night after 15 minutes.

“I think I did quite well,” said Daly, of the National Women’s Soccer League’s Houston Dash. “I think I brought that energy that was needed on the wing. I put a couple of balls in for Ellen, missed one chance that I had but I’ll build on that and hopefully go out there and score next time.”

Head coach Phil Neville has often used Daly in a more defensive role and rarely as high as she played last night and the player herself appeared pleased to be higher up the pitch.

“Yeah, I like it up there,” she laughed. “I’ll do a job wherever I’m needed. I try and put a shift in wherever I play, but, obviously, I’m naturally a more attacking player so it’s good for me to be up there.”

Stanway had an equally impressive debut on her first major tournament start, too. Her energy in the No. 10 position and weight of pass led to England’s opening goal and many believe Stanway has done enough to at the very least challenge for a starting spot in the next round.

“You’ve just got to look back at the result as a whole. We won 2–0, whether it was our best performance or not is a different matter, but you’ve got to look at the result: we’ve got three points. We’ve got nine points now so we’re very happy. Job done.”

Neville rung the changes for the Group D decider, leaving just the trio of Lucy Bronze, Steph Houghton, and Jill Scott who started in the previous win against Argentina.

If the rotation had backfired, England would have been looking at a second-round encounter with either Canada or the Netherlands, but Neville gave the players he called in plenty of time to prepare.

“It just gives you a few days to relax and settle into it,” said Stanway.

“There’s nothing worse than being told hours before kickoff and getting worked up about it and thinking you’re not prepared. It’s just nice to know in advance and obviously us girls kind of take longer to get over disappointment so you have a night to sleep on it and refresh for the morning.”

Both players are two out of eight embarking on their first major tournaments with the senior England with an extra three taking part in their first World Cup.

The pair had their first taste of it as substitutes in the opening matches but the Japan match was the first time they’d walked out in the team and stood for the national anthems, and both are doing their best to savor the moment.

“It’s been a bit of a whirlwind,” admitted Daly. “You don’t actually realize what it feels like until you get out there on the pitch. Off the pitch things are still wild — you’ve seen the fan zones — but once you cross that white line it really kicks in that you’re at a World Cup.”

Stanway represented England at the U-17 World Cup at the end of 2016 and again at the U-20 World Cup in France last year, where Japan knocked England out of the tournament in the semifinals.

“It’s been unbelievable,” she said. “There’s obviously no bigger stage than this and I’ve done it surrounded by the girls that I absolutely love. It’s hard for me to describe because I just loved every minute of it.”

Both players were also selected in their favorite roles, with Daly playing much higher as a winger and Stanway playing in the role just off the striker, allowing her to get on the ball outside the box and test the Japanese goalkeeper with some of her trademark efforts from range.

Neville has often singled Daly out for praise due to her versatility and has used her in a number of positions and the Houston Dash forward praised Neville for the “freedom” he gives players.

“He allows me to express myself. He doesn’t criticize forwards for taking chances like that. For me, it was enjoyable to that. Wherever I’m needed, I’ll put a shift in and do the best I can do.”

Speaking about her own position, Stanway said, “I like to be in that position which allows me to get forward and allows me to get a shot off. Anything like that, but obviously you can see today that everyone grafted within their position and obviously Rach did an unbelievable job at right wing and vice versa for everyone else.”

Both players also play with a certain amount of tenacity and alongside Ellen White make for a combative front three not afraid to throw themselves into challenges.

Stanway, in particular, has often put herself about despite her small stature while Daly admits she plays better when she’s angry on the field.

“I wind myself up,” she said. “Give myself a little bit of a kick up the backside. I talk shit to myself I won’t share!”

Neville has said the emphasis is now on winning football games as the tournament enters the knockout stage and despite good performances there’s no guarantee either Daly or Stanway will start in Valenciennes on Sunday with Nikita Parris and Fran Kirby often the preferred duo in the starting lineup.

Both will have given the head coach food for thought whoever England play in the second round but the pair once more refer back to the fact Neville trusts all 23 of his squad members.

“There’s a few who haven’t played yet, but I’m almost certain they’ll get their opportunity at some point,” said Stanway. “I think that just shows the depth in our team. You can see that whenever someone scores, the whole bench are up and everybody is trying to celebrate together because we’re one. Whether you’re playing, whether you’re not, everyone is just supporting each other.”

Daly added, “It’s the trust he has and we trust him just as much as he trusts us, so whoever he puts out we know they’ll go out and they’ll do a job.”