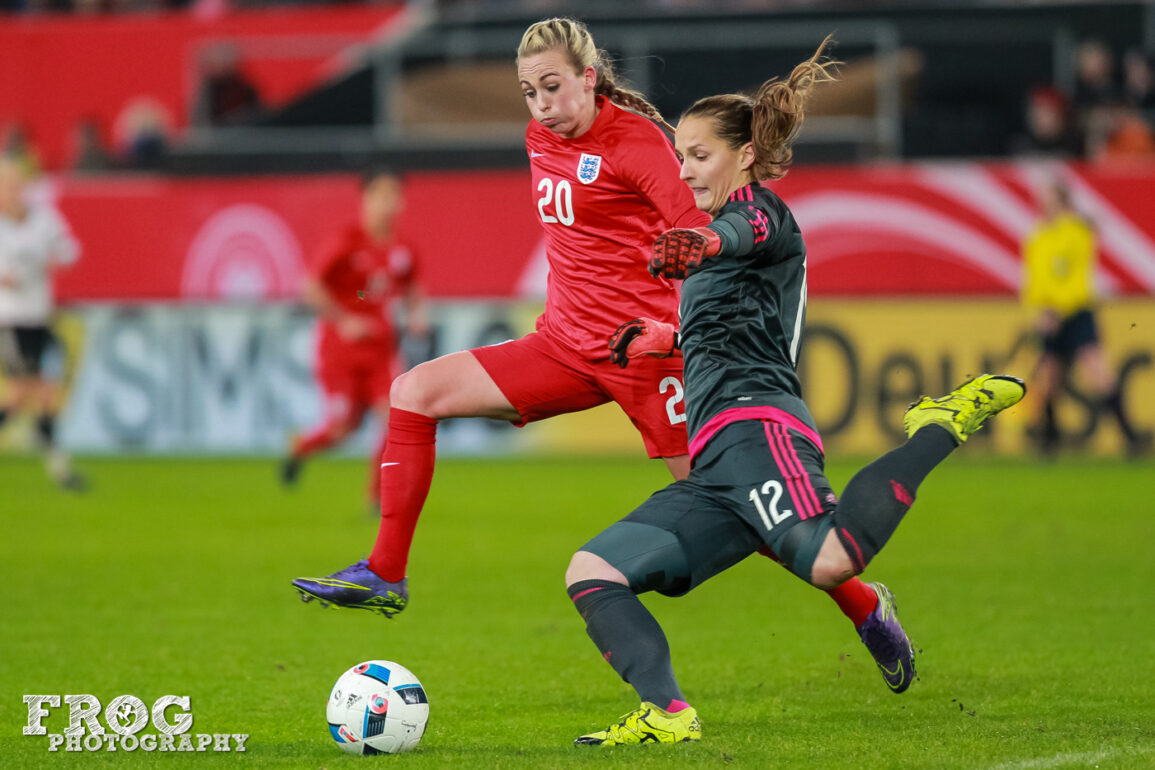 Toni Duggan says she has a “smile on my face” after being declared fit to face Japan on Wednesday night.

Duggan has missed the opening two matches of the tournament against Scotland and Argentina due to a thigh injury picked up in the first training session after the squad landed in France two weeks ago, but she’s back training and ready for a rematch of the dramatic 2015 semifinal.

“I’ve been glued to my bed, icing my leg, constantly getting treatment,” said the FC Barcelona forward, but the 27-year-old has been making positive use of her time out from playing.

“Every single time I’ve had every single game on the TV,” she admitted. “The girls are like ‘get away from the telly!’ You’ll probably think it made me feel worse but I’m just trying to think about if I come up against them, maybe if I get a chance, I can do this or that.

It’s a sign of Duggan’s growing maturity and role within the squad. The 27-year-old is now passed the 70-cap mark for England and was given the captain’s armband by Phil Neville for a friendly match late last year.

Duggan is now on her fourth major tournament but admits it’s been “so difficult” to sit on the sideline after an injury in the buildup to Euro 2017 saw her lose a regular starting spot for Manchester City and eventually the England team on that occasion, too.

It’s meant a frustrating period when it comes to tournament football for Duggan but she’s now ready to face the side that ended England’s World Cup hopes four years ago.

“I’ve got a smile on my face this morning because I’m back fit,” she said. “But I’m not going to lie, it’s really difficult as a sportsperson. Any athlete will tell you that it’s the most difficult thing in the world being injured.

“I didn’t expect it. It happened in the first session when we landed here. You can imagine the emotions, you just want to get out to France and be excited to start and then I pick up an injury. So yeah, I was really disappointed.”

Another sign of Duggan’s growing maturity and leadership within the squad is the role she’s taken on for some of the younger players in the squad while injured, eight of whom are at their first major tournament, plus non-squad player Ellie Roebuck.

“I’m trying to support the girls in any way that I can. If I can’t input on the pitch then I’ll input off the pitch. There’s a lot of girls playing in their first World Cup, some of them are my closest friends — Abbie McManus, Nikita Parris — so to try and help them and get them ready for the first game, that’s where I’ve found some comfort.”

Duggan also praised her head coach for the support he’s offered to not just her, but other players during the tournament so far, plus admitted there is always a psychologist available if players need to speak to one.

“I had a little chat with her,” Duggan said. “Phil’s been amazing. I think that’s one of the biggest positives I can ever say about Phil. Since he’s come in, his man-management skills have been unbelievable. I think that’s been there for everyone to see the other night when he really handled Carly [Telford] and Fran [Kirby] amazingly.

“He’s been the same with me with the injury. He puts an arm around you, he’s been there as a player — it means the world. It shows how much he cares about the players and he’s helped me through the injury, and hopefully now I can repay it out on the pitch.”