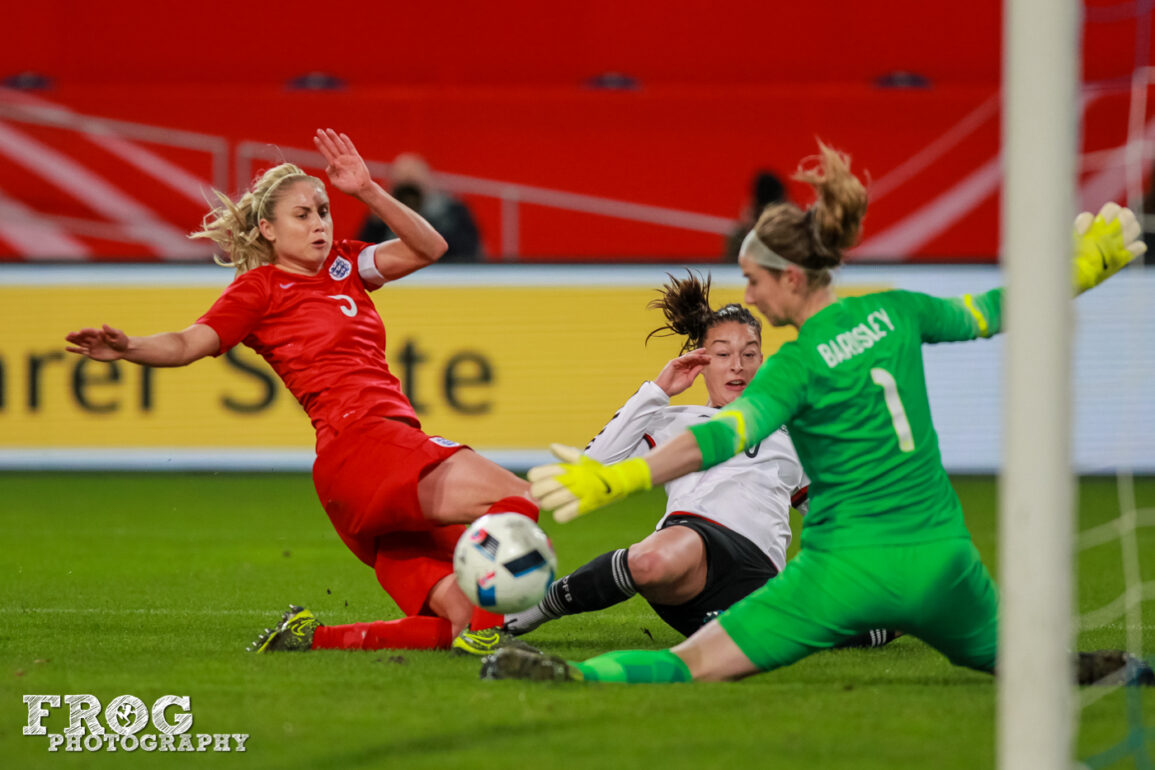 England goalkeeper Karen Bardsley says playing with boys while growing up “one hundred percent” helped her training and playing and feels it’s a “cop out” to single out goalkeepers as the debate about whether goal sizes should be made smaller in the women’s game.

Bardsley, 34, has held down the spot of England’s No. 1 for several major tournaments now and is one of the most experienced goalkeepers at the current World Cup in France.

Speaking late last week before England’s second match against Argentina, Bardsley had plenty to say about being a goalkeeper the morning after Thailand had conceded 13 goals to the United States in what was a record for a Women’s World Cup.

Aside from a few errors, goalkeeping at the tournament so far has generally been very strong across the board, with the likes of Christiane Endler, Vanina Correa, Almuth Schult, Sari Van Veenendaal, Sydney Schneider, and Erin Nayler all impressing with displays during the opening week of play.

“There are people who know their strengths really well and they know their weaknesses really well,” added the Manchester City goalkeeper. “I remember a moment in 2014 when Man City were playing Chelsea and Toni Duggan put the ball absolutely top bins. It wasn’t the best effort from the goalkeeper but it didn’t take away from what Toni did.

“She brought down a ball, hit a brilliant shot, and it went in the corner. Everyone else would watch that and think ‘What a strike’ but instead of celebrating it was ‘goalkeeper’s on the floor,’ so that’s a bit disappointing.”

Bardsley continued, “Whether it’s threat I don’t know, but I don’t know why people can’t praise when they see something done well – even if it is by a woman. I’m not here trying to burn a bra or anything and say ‘Yeah, we need to take over’ but one of my most important values is credit where it’s due. That’s a big value for me.”

And the U.S.-born goalkeeper isn’t averse to getting the general public involved to show just how difficult her job can be.

“It does frustrate me because I’m like, ‘come on, let’s see you do better.’ It would be fun to get the general population out and about doing stuff with us. ‘If you think that’s so easy, get in goal!’”

Social media is regularly awash with constant criticism of goalkeeping in the women’s game, perhaps sometimes fairly, but often a goalkeeper’s height has a detrimental effect on their ability to make a save a male goalkeeper may make without breaking a sweat.

Chelsea manager Emma Hayes has been the most vocal when it comes to considering resizing the goals in the women’s game but Bardsley went into some detail to describe the intricate differences between male and female goalkeeping.

“The only difference you’ll find is the depth in goal is probably different,” she said. “If you are a male goalkeeper, typically, you’ll play a bit higher. The reaction speed in terms of angles and parrying shots means they’ll be three yards further out.

“Techniques are constantly changing, always evolving. Techniques are coming in from futsal and handball. What we need to do, in terms of perception, is make goalkeeping a sexier position. Getting people that want to play the position because the constant message I heard growing up was ‘If you’re unfit, you go in goal’ or ‘If you’re crap, you go in goal.’ But no, no, no — how do we change that? How do we give goalkeeping more respect?”

Playing out from the back has also become a huge part of modern-day goalkeeping, something that has ensured Bardsley is now no longer assured her No. 1 spot for club or country due to Carly Telford’s comfort with the ball at her feet and the emergence of Ellie Roebuck who is both Bardsley’s club and international teammate.

“You look at Ederson and Allison and the impacts they’ve made coming into their teams, playing out but also being good shot-stoppers and having a presence. Those are the things I think you have to start rethinking. How impactful that position is, as opposed to someone just doing custodial duties at the back.”

She added, “Everybody wants to score goals. But making saves is a great feeling, too. Something that always makes me laugh is that every time a goal goes in, everybody pans to the celebration, but then straightaway they’re looking at what the goalkeeper is doing. Are they sad? Of course they’re sad, they just conceded.

“How do you start giving credit where credit’s due? How do journalists and pundits start to understand the intricacies of goalkeeping?”

Bardsley draws on the time she spent playing and training with boys while growing up and admits it made her a better goalkeeper and helped her become the goalkeeper she is today.

While girls can no longer play with boys from a certain age, Bardsley thinks such an experience would be invaluable for so many youngsters.

“We’ve done it in the past,” she said. “To be honest, health and safety have stepped in and stopped us doing it in the past. It may be there were child protection regulations to observe, but I did it in the past when I was growing up. I trained with some great goalkeepers at college alongside full-grown men.

“It helped me. The speed of play, the reaction speed, the strength. Those things were invaluable to me as well as the mind-set. They were all helpful.”

The 34-year-old believes the only way to help earn women’s football the respect it deserves is to keep pushing the sport in the media, or as she describes it, “normalizing” the fact both great saves and great goals happen in the women’s game and move away from comparisons to the men’s game.

“All of us and the greater media have the power to shape the public and we need to shape them in a positive manner. That goes above and beyond people in terms of social power that people in TV have. Match of the Day has a massive audience and the more we speak about football in a positive way, hopefully, that continues to change opinions as well as when we back it up with good football.

“What’s happening with grassroots, the continued involvement of boys and girls, we are seen as equals in academies. Get used to seeing us make great saves and scoring great goals, just normalizing it is a massive part of what we need to do. Just continuing to fight for the opportunities to have coverage. What I’ve seen from 2011 to 2015 to now is there has been a massive boost in coverage and we’re so honored to have that opportunity now to change perceptions.”