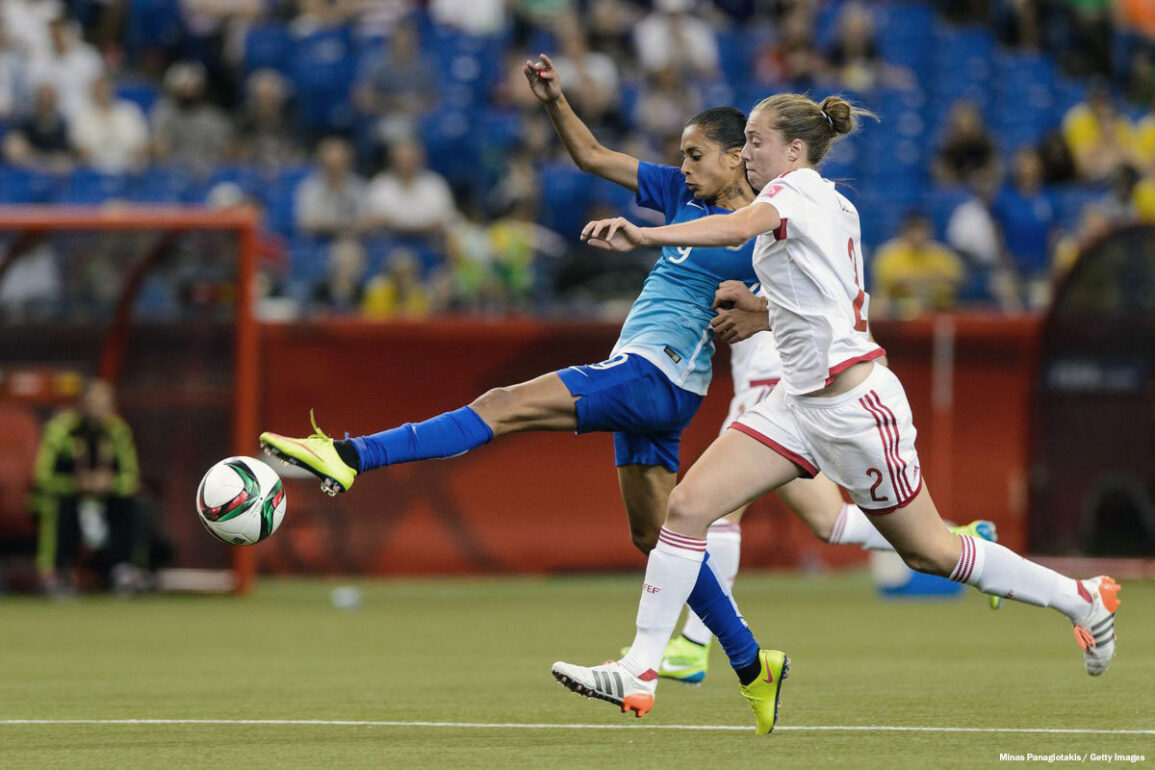 Minas Panagiotakis / Getty Images
[dropcap]C[/dropcap]elia Jiménez Delgado is a Spanish footballer who plays for Reign FC in the National Women’s Soccer League and the Spanish National Team. She grew up in Alcaudete, Spain, but attended college in the United States at both Iowa Western Community College and the University of Alabama.

At just 23 years old, she is preparing for her second World Cup. In just a few moments with Celia, you realize that, despite her youth in years, her life experience is that of someone at least a decade older. At 14, she left her family and home to pursue her dream of playing professional soccer. Alone, in a completely new city, most of her teammates were at least five years her senior, some even double her age. It was an incredibly challenging time for her, but it also equipped her very well for her future.

Celia came to America speaking almost no English, yet she managed to graduate top of her class at Alabama with a degree in aerospace engineering. She is truly a great player and person, full of perspective well beyond her years. In listening to her story, it becomes apparent that her success stems from daring to follow her dreams and daring to create a path where there wasn’t one before. On and off the field she is a player and person to keep your eye on. Celia’s journey has already been an amazing one, but she’s just getting started.

Michelle Betos: What does your team have to do to make it out of the group stage?

Celia Jiménez Delgado: I think we need to be true to ourselves, our philosophy, switch the point of attack, be patient, but I think that the key is going to be if we are able to be dangerous and actually take some chances; just getting into the box, shooting into the goal, and especially if we’re able to recognize when we actually need to play direct.

Betos: Which teams are you most excited to play against?

Jiménez Delgado: Our philosophy with the national team is we go game by game, so I think the most important game right now is the first one and we need to really focus energy on those 90 minutes — step by step.

Betos:: Which players from your own team should we be on the lookout for to make a big impact?

Jiménez Delgado: I think we have people on our team who have a lot of experience, like Irene Paredes, she plays for PSG [Paris Saint-Germain], and I really think that she can lead the team and calm the team whenever necessary.

We also have people who are really young and talented like Mariona, she plays for Barcelona, and I think that she can be someone who can give us that quickness or dangerous move in the attacking third.

And then definitely Jenni Hermoso who plays now for Atlético Madrid [Primera División], I think she’ll take a really different player and you never know if she’ll be the key player who is able to turn a normal game or a decent play into a goal-scoring opportunity.

Betos: So when is the first time you personally dreamed of going to a World Cup?

Jiménez Delgado: Honestly, I don’t even think I had time to think about going to the World Cup because I have been before I had the chance [to dream about it].

Jiménez Delgado: When I got called into the national team for the first time, like the senior team, they were already competing to qualify, so I kind of got thrown into that and I was 19, so I didn’t have much expectation, I was just happy to be there, and obviously I wanted to work hard and earn a spot […] I wanted to try, but I knew there were people there that had been on the team for a long time and that had way more experience than I.

And then, I don’t know, I went into a couple practices, then I played some games and in little time I was playing in the World Cup and playing against Marta, which I love playing against her. Every time I think it’s cool because she has such a name and everybody knows about her and those are the players that I like to play against, they always bring the best out of me. So, I don’t know, I kind of got thrown into that dream, honestly, before I had a chance to even dream about it.

Betos: That’s really cool. So what does this World Cup mean to you, compared to the last one?

Jiménez Delgado: I’m really, really excited about this World Cup because now I think I’m a bit older and I have a little more experience. I also think last World Cup in Canada was the first time that the senior team in Spain qualified for the World Cup ever, so we had never experienced such a big tournament.

We never had played against teams like Brazil, for example, which is a team that knows a lot about the game — time management, how to like foul someone when it’s time to break and slow down the rhythm of the game — they know how to play the mental game and I don’t think we knew that because we hadn’t been exposed to that. So I think this World Cup is really important for Spain because it is a time to actually prove and actually see what we’re doing in Spain makes a difference and that we are at the level that we think we are. So, I’m excited to see how the experience and also the younger players, that combo, turns out.

Betos: What’s something about your team you think most people don’t know?

Jiménez Delgado: Probably something that I’m not going to tell you so that you still don’t know [laughs].

Betos: Okay, so something to find out after the World Cup, maybe?

Jiménez Delgado: Yeah, to be found out after the World Cup.

Betos: That’s fair, that’s fair. What’s something about you that most people don’t know about you on the field?

Jiménez Delgado: On the field, that I enjoy playing for the team a lot more than playing for myself. I would enjoy a hundred times more giving an assist than scoring a goal. I would literally enjoy a million times more running for someone else, like for a defender that needs me to go cover or a goalkeeper, running for you than, I don’t know, just running because I need to run, you know?

Betos: Who inspires you the most?

Jiménez Delgado: My mom, definitely. I think she has been a different woman and by that I mean, just like when she was born I think there was still a little bit of gender gap in Spain and she never saw that as a reality. She didn’t believe that was right, so she never took it into consideration. She was one of, well, she was actually the first generation of women police officers in Spain and I don’t think she ever doubted herself or she ever thought that she couldn’t do something because she was a woman, and that is something that she completely transitioned, no not transitioned, passed onto my sister and I. Not only in the gender field, but with anything in life.

Betos: I love that. Who is your favorite player to watch?

Jiménez Delgado: My favorite player to watch, probably on the men’s side, is [Andrés] Iniesta because I enjoy how he is a team player and I enjoy that. Like, I love seeing how he works for the team and how he does the dirty or the hard work without having to necessarily have a reward or people cheering for him.

And for me, if I’m going to look up to an athlete it’s also [about] off the field and in that case he is an awesome man. He’s helped his own town so much; he builds all these companies, only hires people from his hometown, which is a really small town in Spain, and now the economy in that town is way better because of him.

Betos: What makes you the most proud to be Spanish? Or, what’s the one thing you’re proud of?

Jiménez Delgado: Probably what friendship means for us. Because my friends in Spain were my family when I left home when I was 14 and had to start living on my own when I was a kid, like legitimately a kid, and I didn’t know anything and I was lucky that the town that I moved into, I found these unbelievable people who helped me and pretty much raised me.

And I think I am where I am today because I was able to make it through those years, like high school, not even knowing how to cook, living on your own and having to do everything at your house, and they helped me every single day and every time I was tired or I felt like I couldn’t do it anymore, they were there to support me and I feel like that’s a Spanish thing. You know, you really build relationships and when you connect to someone it’s a loyal connection and loyalty is something that means a lot for me. And I think Spanish people are strong.

Betos: Okay, last thing. What’s one piece of advice you’d give someone who wants to be the next Celia Delgado Jimenez?

Jiménez Delgado: To never dream little. Like I said before: If you want something and it hasn’t been accomplished before, it doesn’t mean that it’s not possible. For me, I always knew I was passionate about engineering, technology, math and everything, and also sports. Like, I was really competitive, and I feel like in Spain, especially back in the day like five years ago, it was either you study or you played soccer, but you couldn’t do both at the level that I did. So for me it was a little hard mentally to just decide that I wanted to do both and that I wasn’t going to quit either of them, so I don’t know going through that and making it happen, I think, has really made me who I am today. I think that someone who would want to be like me or just learn from it [my experiences] has to have that strong mentality of “I can achieve whatever I want because I can make it happen myself.”

Jiménez Delgado and Spain’s National Team open up Group B play against South Africa on June 8 in Le Havre.