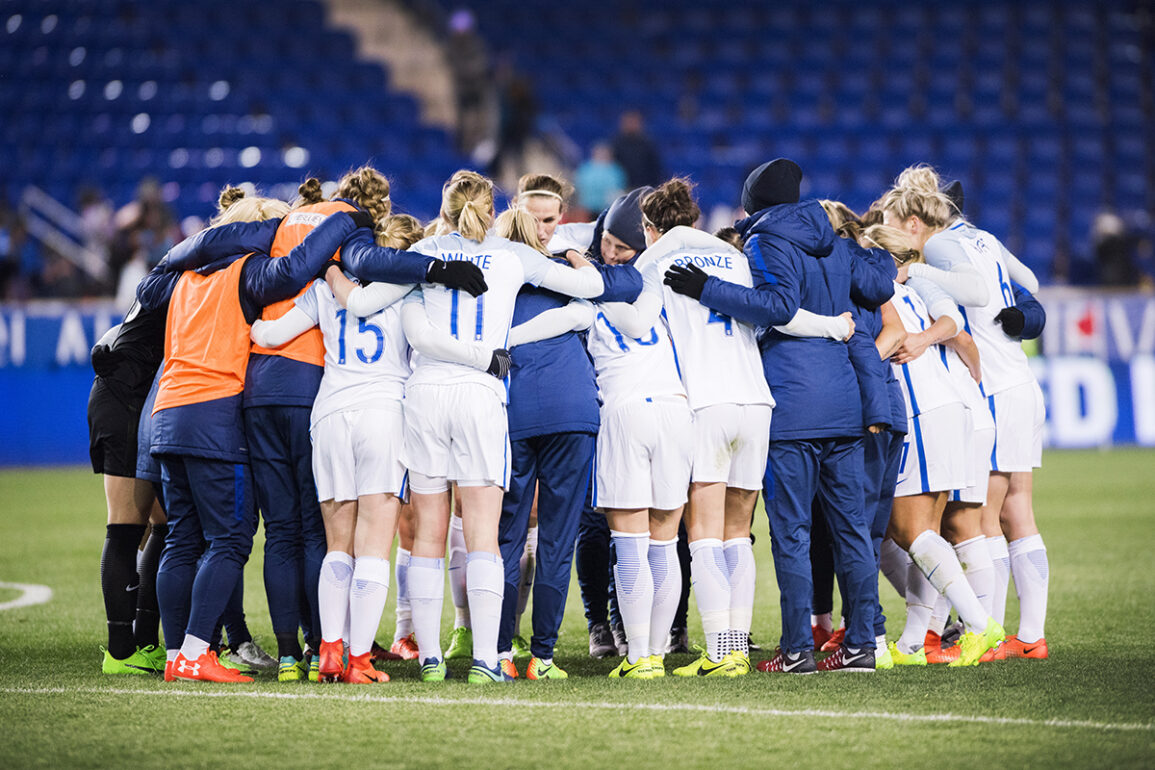 England stuttered in its final test ahead of the World Cup, losing 0–1, to New Zealand in front of 20,000 supporters at Brighton’s American Express Community Stadium.

Sarah Gregorius’s second-half goal after Carly Telford spilled Rosie White’s effort was a microcosm of what England has been in recent months: wasteful up top and unable to hold out at the other end.

The performance in itself wasn’t bad and didn’t show a whole lot to fear regarding England’s chances of going far in France, the team passed the ball around well enough and wasn’t often that troubled by New Zealand but there continue to be fundamental issues that have shown up on a regular basis for a while now.

The lack of consistency in selection from head coach Phil Neville has been widely talked about but it’s not the biggest issue and it was good to see the majority of players all get minutes across the final two warm-up games, despite Neville saying he was finished experimenting.

But the arguments that this was somehow England’s “B” team and not representative of what’s to come in France aren’t easy to accept. Was it the team that will likely start against Scotland? No. But what is England’s “first choice XI” as people keep asking?

Neville has said he doesn’t have one and will rotate his team for all three group games. He also said he was picking the best team to beat New Zealand, so if we take him at his word the XI he selected were the XI best prepared to do the job at hand.

It also doesn’t take into account England faced two opponents far from the top of their game and neither at full strength. Denmark won’t be in France next week and were missing key players such as Arsenal’s Katrine Veje, former Manchester City forward Nadia Nadim, and Reign FC’s Theresa Nielsen.

New Zealand has five players in the squad who came to England without club affiliations. Some, like captain Ali Riley and center back Abby Erceg play for top clubs while others play predominantly in Sweden, Norway, and Iceland; goal scorer Gregorius currently plays her domestic football in New Zealand.

The biggest knock-on from the lack of consistent team selection has been a lack of cohesion on the pitch. Beth Mead admitted after the Denmark game players are still getting familiar with each other. At times against New Zealand it did feel like some players weren’t always quite on the same wavelength.

Constantly tweaking your team is no big problem and can actually prove very effective, as former head coach Mark Sampson proved at the last World Cup when he changed formation almost every game, even pulling out a 3-5-2 system that his team had never played for the bronze medal match against Germany.

But Sampson’s team had a solid foundation. His goalkeeper never changed and rarely did his first choice center back duo of Steph Houghton and Laura Bassett, while Lucy Bronze and Claire Rafferty soon made themselves first choice full backs by the knockout stages.

Neville hasn’t played the same back four two games in a row since his second and third matches in charge at last year’s SheBelieves Cup, while the first choice center back pairing of Houghton and Millie Bright have started just three of his 19 games together.

The goalkeeper position has also constantly changed, with Carly Telford starting eight games so far to Karen Bardsley’s seven. The last time a goalkeeper started two games in a row was Telford, but even those games came three months apart in the defeat to Sweden and the opening SheBelieves Cup 2019 match against Brazil.

Neville will argue, perhaps rightly so, that it’s not an issue if he plans to continue chopping and changing in France and the majority might be more comfortable if England looked like they had any cohesion in defense, with set pieces the glaring issue at the moment.

Against Australia last year, England allowed a free header to be scored five minutes from time before conceding from a cross into the box in the home defeat against Sweden.

Against the United States this year, England looked shaky every time a corner came into the box, culminating in a quite shambolic second-half equalizer for Jill Ellis’s side. Canada also took advantage of England’s weakness from crosses in April’s friendly defeat and once again against Denmark and New Zealand, England rarely looked convincing defending crosses into the box.

Sampson’s first-choice back four before his departure was often that of Lucy Bronze, Steph Houghton, Millie Bright, and Demi Stokes, a back four we have yet to see in any of Neville’s 19 games so far.

There are caveats to defend Neville with of course. Houghton has missed several big camps including last year’s SheBelieves Cup while Bright missed this year’s tournament to work on her fitness. Stokes also missed the majority of 2018 through a hip injury so Neville hasn’t always been able to call upon a consistent defense throughout his 17 months in charge.

In midfield, things are better and all options are generally performing to the best of their abilities, but the issues in the center of the pitch seem to stem from a hesitancy to commit to any single system.

Neville admitted last week his players seem to prefer one system to the system he prefers, and England now generally switches between a 4-2-3-1 and a 4-3-3 from game to game. A flat midfield two allows Neville to go on the attack with a No. 10 on the pitch but hasn’t always offered much shielding to the defense while also not getting the best out of Jill Scott, one of the key players during Neville’s tenure.

In a three, England looks more solid and it allows Scott to get forward and make runs into the box, which has made her such a goal threat under Neville, but you do miss that link between midfield and attack that Fran Kirby has at times offered, particularly at this year’s SheBelieves Cup.

In attack, there are more issues. Neville claimed on Saturday he was “not worried” about his goal scorers and it’s a fair point given the form most have been in for their clubs, but it hasn’t been repeated for their country.

Beth Mead shares top-scorer duties with midfielder Scott with Ellen White and Nikita Parris, the two top English strikers at the moment, both on four each after 19 games.

Against New Zealand, Neville deployed a front four consisting of Kirby, Parris, Barcelona’s Toni Duggan, and Reign FC forward Jodie Taylor, all of whom showed chinks in their armor that leads to questions further down the line.

At one time, Parris and Duggan would have been a more-than-adequate pairing on the wing but neither has played that role for their club for some time. Parris played the whole of last season as a forward for Manchester City while Duggan has returned to her former role as a No. 9 since joining Barcelona, and both proved ineffective out wide on Saturday, but it’s hard to pin blame on either.

Through the middle, Kirby endured a frustrating game and seemed to lack the creativity as a No. 10 to help break New Zealand down. Often having to drop deep to get on the ball, Kirby’s options were limited and she benefited when Neville introduced the once-again lively Karen Carney in the second half, with Kirby laying on a delicious chipped pass over the defense for Carney’s chance that Erin Nayler saved.

Taylor looked like a striker out of form and lacking confidence. It’s been a year now since she found the net for England and that was a penalty against Bosnia-Herzegovina, her only goal from open play coming in Neville’s opening game against France.

Gifted several chances by the New Zealand defense, Taylor was keen to take more touches than necessary, a sign of a player lacking in confidence and maybe we’d have been having a different discussion with White on the pitch from the off.

Right now, England is having to rely on being clinical because not enough clear-cut chances are being created. Despite a mountain of possession, the Lionesses mustered four shots on target on Saturday, two chances of which were created by loose passes out from the back by their opponents.

Against Denmark, it was just two, both of which that were put away. Five shots on target came against Spain while it was once against just the two against Canada. It means three defeats in five home games now for England, in all of which they failed to score, added to the blanks fired against Wales in last April’s qualifier.

It appears against solid, defensive sides England lacks the ideas or cutting edge to break opponents down. Neville admitted after the New Zealand match his side was too keen to respond and drifted away from the game plan, sending in aimless crosses that were constantly claimed with ease by Nayler.

While Neville has been keen to get England on the front foot and move his side away from playing on the counter, it’s on the counter when England thrives. Against Denmark, an early breakaway created a glorious opportunity for White just seconds after the ball was in their own box before the second goal came after a swift break up field culminated in Jill Scott heading home.

It was a similar story at SheBelieves when England was only too happy to sit and absorb pressure from Japan before hitting them on the counter time and time again in one of the best 45 minutes they’ve produced under Neville.

That may bode well for France when the further England goes, the tougher the games will get, but a side lacking a cutting edge and not assured at the back will first have to navigate a tough test in Scotland and a banana skin in Argentina.

England isn’t a bad team and there’s been some positive signs under Neville so far. When they do get it right, they score some sumptuous team goals like the second against Denmark and the two against Spain in April, while SheBelieves showcased some of England’s best football in the last 18 months.

Many say they’re not worried by New Zealand’s win, rightly so. A friendly is a friendly after all, but the bigger worries should be the issues that are appearing on a game-by-game basis and don’t seem to be close to fixing with a week to go until England’s World Cup opener in Nice.