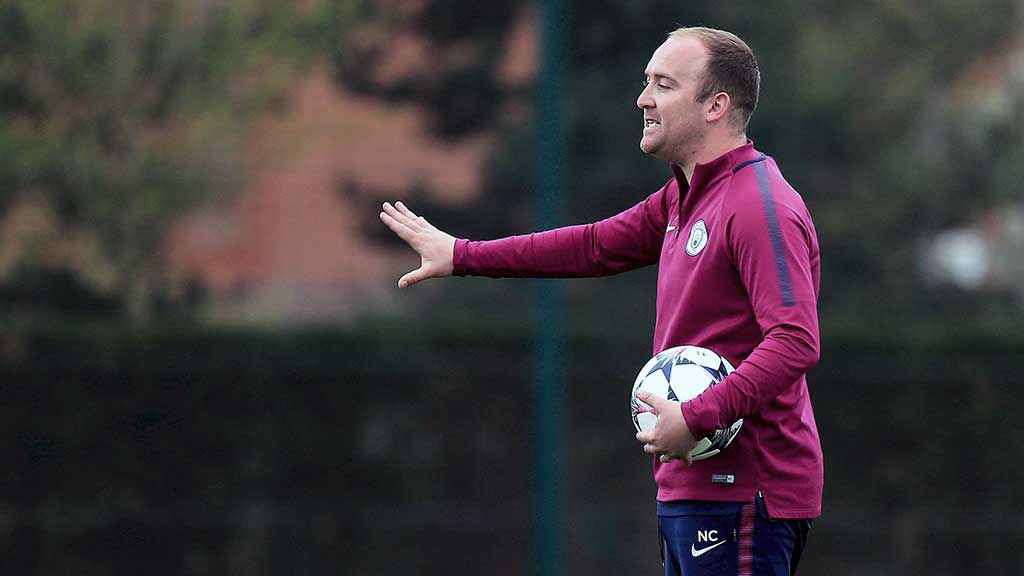 Nick Cushing said he was “proud” of his side’s efforts this season despite missing out on a second FA Women’s Super League title as Arsenal claimed their first league trophy since 2012 on Sunday.

Manchester City, though, have the chance to wrap up a cup double when they face West Ham United in the FA Cup final this Saturday after beating Joe Montemurro’s Gunners in the Continental Cup final back in February.

It will be the second time Cushing has led his side out at Wembley, beating Birmingham City. 4-1. two years ago, and could be the sixth trophy he adds to the trophy cabinet since the club’s reformation in 2014.

Ahead of Saturday’s match against Matt Beard’s FA WSL newcomers, Cushing was in an almost philosophical mood when discussing his team’s progression over the past six seasons.

“It’s important for myself to be the head coach of a team that continues to play well and win,” said Cushing. “Here it’s not about isolating individual trophies, it’s about continuing to be successful and for us domestically to be up there challenging for trophies.

“Every competition we play in, we play to win. We’re proud of our form this year and after last year not picking up a trophy, we were proud to pick up the first one and we’re proud to go to Wembley to fight for the FA Cup.”

There has been a certain amount of evolution in the City squad since they beat Birmingham two years ago. Three of the goal scorers on that day — Lucy Bronze, Izzy Christiansen, and Carli Lloyd — have departed the club, as well as forward Toni Duggan.

Georgia Stanway came on as a substitute while Ellie Roebuck had only just made her league debut as a substitute at the end of 2016. Keira Walsh and Abbie McManus were yet to make their England debuts while the likes of Lauren Hemp weren’t even on the radar and all could be involved at Wembley this weekend.

With a growing reputation for developing young British players, Cushing shows no sign of his motivation wavering and poured praise on another player who has developed under his leadership, Nikita Parris.

The Toxteth-born forward picked up the Football Writers’ Association Player of the Year award this week and has been one of the biggest influences on Man City’s success this season.

Speaking about Parris specifically, Cushing couldn’t praise his striker enough for her contribution this season.

“As a striker, when you’re getting towards 20 goals in a season it means you’re doing your job properly as a striker and Keets has been exceptional this season,” he said. “She’s gone through the development process we’ve gone through with a lot of our players over the years. We sign players from teams that aren’t consistently successful and then we put huge expectation and responsibility on them.

“The likes of Keets use the likes of Steph and the senior players to help this team become successful. Nikita has been the one player consistently who has scored goals and if you have that kind of player you’ll be successful and as a player you’ll get awards and it’s reward for her quality, determination, and hunger.”

With Parris out of contract and speculation about a possible move to join Bronze and Christiansen at Olympique Lyon, Cushing admitted it was “imperative” for City to keep hold of their best players to continue progressing.

“Every season, from 2014 to now, my job is to show progress with this team. Nobody can always win but progress for us is on and off the pitch and players like Nikita add to that.

“We’re just as proud of winning trophies as we are in Georgia Stanway, Keira Walsh, Abbie McManus and Ellie Roebuck making their England debuts, in Nikita breaking records, in Steph, in everyone. Keeping those players who want to improve is imperative to this team progressing.”

There has always been plenty of discussion surrounding whether Cushing is underachieving or overachieving with the players, facilities, and budget he has at his disposal, but a sixth trophy in as many seasons would have been tough to turn your nose up at for any Manchester City fan at the start of 2014.

With two games to go, City still have a realistic chance of going the whole domestic campaign unbeaten with a trip to newly-crowned champions Arsenal their only remaining league encounter.

And Cushing once again admitted he was “proud” of the achievements of his players, not just this season but over the course of his tenure so far.

“I’m most proud that in my sixth season being the head coach here we’ve always competed for every trophy. The league has gone down to the last two games, we’ve won the Continental Cup, we’ve won the FA Cup in the past, and I’ll put myself under pressure next season to continue to be the best coach I can be every day, to push the players individually and collectively.”

With attentions now fully turning to facing West Ham on Saturday, Cushing’s side goes into the game as favorites due to their status as one of England’s top teams and the fact this is still West Ham’s first season as a professional team.

Likening the situation somewhat to how Cushing put together a side from scratch in 2014 and reached a cup final in the first 12 months, the City head coach said two-time FA WSL winner Beard has done an “exceptional job.”

“The hardest thing in the FA WSL, and it’s probably even harder than when we did it in 2014, is to form a team from nothing. They’ve done an exceptional job of recruiting a team, putting it into the WSL, and being competitive.

“I have huge respect for Matt, he’s the only coach in my tenure who has won the league back to back and we know we’ll be playing a difficult team.”

City has put 10 goals past the Hammers in the two games the teams have played this season, including a resounding 7-1 win earlier in the season at the City Academy.

But West Ham have improved massively since then and after giving Cushing’s side a run for their money at Rush Green, the City manager knows it won’t be an easy game but admits complacency is always a “danger” for any side.

“We’ve all seen the cup finals where the so-called ‘underdog’ has beaten the team people perceive should win but my job is to coach this team and make sure this team — they don’t become complacent whoever they play and whatever people say.

“We’ve done that very well this season because we haven’t lost a game. As head coach, I’m the guy who has to look at why we play well and why we don’t and that’s all we can do for this game prepare the team for a difficult game. We know the 7-1 here wasn’t a true reflection of West Ham. We played well on the day but they were probably disappointed with their performance. The 3–1 at Rush Green, at 2–1 they’ll feel like they were in the game and we know it’s going to be difficult. It’s a one-off game and anyone can win. We’ll leave all of that for you guys to write and we’ll do what we can to ensure we play well and that’s what we’ve done for six years.”

Cushing also has the peace of mind he can call on every single member of his squad for Saturday’s final with nobody set to miss the game through either injury or suspension.

After both the league and the cups got away from them last season while struggling to cope with the demands of challenging for four trophies with a thin squad, Cushing added more depth to his side over the summer but also made several changes behind the scenes he believes has made a positive impact.

The lack of Champions League football after Man City was knocked out by Atlético Madrid back in September has also inadvertently helped keep his side fresh, but the head coach is under no illusion his side is in a much better place physically than 12 months ago.

“I’ve said it over the last six months, this period from a squad point of view has been the best in six seasons. We’ve had niggles but we’ve had virtually a fit squad since Pauline [Bremer] and Megan [Campbell] came back, and for the FA Cup final we’ve got a fit squad to choose from.”

Regarding the changes made behind the scenes last summer, Cushing added, “It’s my job to oversee the process and we made some changes last year in the offseason and we’re seeing the fruits of that in terms of the fitness and freshness of the squad. It’s so much better, we’ve had less games but we’ve made changes in our staffing structure and made some changes to our working week.

“I said last year when people made it out to be a big catastrophe [not winning a trophy], we’re a team that’s five seasons old and we had to look at where we had to improve and change and we’ve done that. We’ll do the same this year. We’ll look at why we didn’t win the league, because really we should have. We’ve drawn five and not lost a game, but that’s okay because we’re six seasons old now and we have to learn and improve and being in a better position than we were last year shows we’re progressing.”