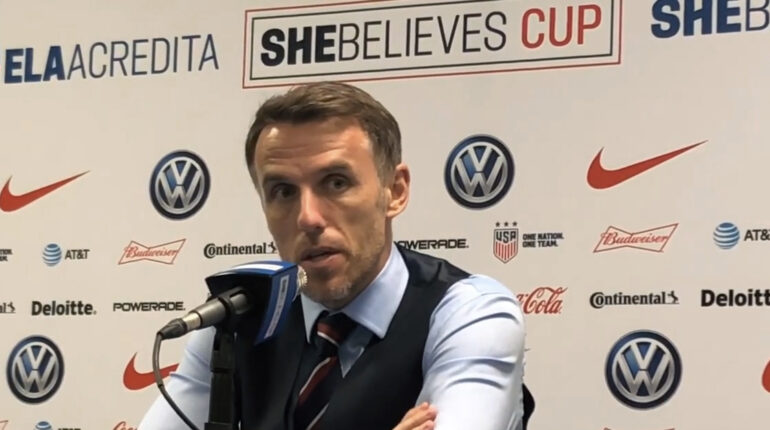 England head coach Phil Neville has reiterated that nobody is safe as the countdown to the summer’s World Cup continues.

While Neville himself admitted there is now a familiar look to his squads, the former Manchester United man is keen to guard against complacency and also sent a message to those on the outskirts of his squad on Monday.

“There’s 23 places up for grabs, it’s as simple as that,” he said. “All the players here will probably get opportunities in the next two games. I left eight senior players out for the Japan game [at the SheBelieves Cup] because I had belief in those coming in and they produced one of our best performances.”

It’s almost two years to the day since former head coach Mark Sampson made a surprise early announcement of his Euro 2017 squad and while Neville is clearly not as much in a rush as his predecessor, he admitted the announcement could come before the end of the month.

Despite making only necessary changes to his squad since the SheBelieves Cup success a month ago, Neville says no one is yet guaranteed a spot on the plane to Nice.

“Nobody has been told they’re in the squad yet, nobody is complacent or booking flights for their families, and I’ve made sure of that.”

He added, “There’s competitions for places and what I’ve got to say is in the last two squads there’s been a consistency to those squads.”

But it appears Neville hasn’t yet ruled out someone breaking into his squad for the first time despite this likely being the final camp before the announcement and the final two “Road to France” friendlies after the end of the domestic season.

The 42-year-old went onto say injuries can have an impact on squad selection and referenced several players who are in his thoughts.

“There’s probably been three or four on the outskirts still in my plans and there are places to fight for,” he enthused. “We’ve seen with Izzy [Christiansen], with Jordan [Nobbs], I was watching an FA WSL game at the weekend and Nikita Parris went down — my heart was in my mouth. You’re going to get injuries so there’s always a chance for the players on the outskirts, the Hannah Blundells, the Beth Englands, who are still in my thoughts.”

Neville was in attendance at the recent Chelsea–PSG game where Blundell scored a superb goal from right back while her Blues teammate England has been in fine form since returning from a successful loan spell at Liverpool.

Birmingham City defender Aoife Mannion has won many plaudits throughout the season and Neville has sent a message to those to just “keep doing what they’re doing” ahead of the tournament and looking ahead to Euro 2021.

“That’s what I’ve told Beth a few times now because she’s been so unlucky,” he said. “Aoife is so unlucky. I can’t go to Aoife, Beth, and Hannah and say ‘you need to do XYZ more’ because they are probably playing at their absolute maximum.

“The problem they’ve got is the players in their positions are playing really well, too. It’s a nice problem for me to have. What I’ve said to them is to keep playing well in the big games. We watch all the games and consistency is important for us and just to have faith and trust that eventually they will get in the squad.”

Neville also made reference to some of the younger players he has taken on camps for experience purposes, particularly Manchester City forward Lauren Hemp.

Hemp has returned to Under-19 duty to help Rehanne Skinner’s side qualify for this summer’s European Championships in Scotland after traveling to the SheBelieves Cup as a non-squad player alongside goalkeeper Sandy MacIver.

“Lauren is back with the Under-19s but she’s on the pitch next to us and we’re monitoring her,” Neville admitted. “She’s another one who could go to a World Cup, she might not be ready for a World Cup but she might be. We saw her at SheBelieves and she was impressive, the players probably don’t enjoy the fact we’ve got 30 players now but it’s keeping their performance levels high.”

Neville added, “They’ve all got age on their side so whether it’s before the World Cup or after the World Cup, these players are part of the England DNA even though they’re not in the squad now.”