With the 2019 Women’s World Cup now agonizingly close, many have theorized for weeks over the draw: who could be drawn with who and where they could play as the spots for places in France have been filled one by one in the last month or so.

FIFA has already announced a new process for the draw this year, with the pots being decided by FIFA rankings rather than confederation like in previous years.

Some rules remain the same. Only Europe can have more than one team in a group due to nine sides qualifying from the confederation but CONCACAF, CONMEBOL, OFC, AFC, and CAF can only have one team in any of the six groups.

Before we get into the complexities of who world champions USA or England could draw, let’s have a look at the pots after the most recent FIFA rankings were confirmed this morning.

There are four newcomers to the tournament in 2019 with Scotland, Chile, Jamaica, and South Africa all qualifying for the first time and we could see a repeat of the Euro 2017 between England and Scotland should head coach Phil Neville’s side avoid a European side in the second pot.

Incidentally, England can’t draw any of the sides they faced in the group stages of the 2015 tournament in Canada. With hosts France seeded and already placed in Group A and both Colombia and Mexico missing the cut, there will be new challenges facing the Lionesses this time around.

For the U.S., though, there could be a certain familiarity to the draw. Australia have held on to their top seeding which means no repeat of their 2015 meet-up in the group stage but with Sweden in Pot 2 and Nigeria in Pot 4, head coach Jill Ellis could come up against familiar foes when the draw is made, and there’s even the potential for a repeat of the 2011 and 2015 finals with Japan missing out on a spot in the top pot.

In terms of who can get drawn where, the confederation rules make it a little more complicated, particularly for England.

While UEFA will have three of the groups comprising of two European sides, that’s the limit and there can be no more than two UEFA nations in any one group.

With four of the six sides in the second pot from Europe, drawing any one of these would rule out Italy and Scotland as potential opponents for England from Pot 3.

Both countries face the prospect of a tough rematch with Japan but it wouldn’t be all bad should England or the U.S. come up against the Nadeshiko because it would eliminate the possibility of a potential banana skin slipup against either South Korea or China from Pot 3.

The same goes if either are drawn with Brazil, that outcome would mean neither U.S. nor England could face Argentina or Chile from Pot 4, the latter potentially a tough tie after their recent 3-2 shock win over Australia.

The CONCACAF rules are a little simpler with only three teams from North or Central America qualifying on this occasion.

Canada’s place as a fellow top seed means no possibility of a matchup between the two countries and it only rules out Jamaica as a potential opponent for the U.S. from any of the remaining three points.

With that in mind, what are the toughest groups possibly for both sides and what might provide the easiest route into the second round?

It would be unfair to suggest there is any “easy” tie from a Pot 2 comprising of Brazil, Japan, Netherlands, Sweden, Norway, and Spain, and while some fans and media may find the prospect of a USA versus Japan, England versus Japan, USA versus Sweden, or England versus Netherlands rematch mouthwatering, it’s fair to say both nations would prefer to avoid those possibilities.

For England, Spain or Brazil would probably make Neville happy given the other possibilities. England held off Spain at Euro 2017 to win 2-0, and Brazil’s recent tepid display in a friendly match between the two sides should leave the Lionesses no reason to fear the Seleção.

Norway would be an interesting prospect for both sides as they beat Netherlands to a top spot in qualifying but the lack of Ada Hegerberg still remains a blow when it comes to the biggest games on the biggest stage.

The toughest ties no doubt would be Japan or the reigning European champions Netherlands. Both teams faced Japan at the last World Cup with varying degrees of success but any matchup between the U.S. and Japan would undoubtedly go down as the biggest tie of the group stages.

England haven’t faced Asako Takakura’s side since their heartbreaking defeat in the semifinals four years ago but will get a taster of what could face them when the two sides go head-to-head again at the SheBelieves Cup in March 2019.

A repeat of their Euro 2017 semifinal against the Netherlands could also materialize but it’s fair to say either would be happy with any of the other four rather than the two tougher options on show.

The permutations can’t be a little bit more complex and hypothetical when it comes to Pot 3 but it’s fair to say both sides would be delighted if they could avoid Japan and both South Korea or China.

With players such as Ji So-yun for South Korea and Wang Shuang for China, the teams are full of technical players who could cause issues on their day.

Thailand would also be one of the more favorable draws while the U.S. would likely be happy with Italy too, though England may or may not be able to face Milena Bertolini’s side.

Scotland would be an exciting prospect for England but again it fully depends on the outcome of Pot 2, though their recent solid performance against the U.S. in Glasgow shows neither nation would be able to take them lightly.

Realistically, there is little in this pot that should bother England or the U.S. too much. South American sides are never the easiest sides to play against and Chile’s recent win in Australia will have made both stand up and take notice but drawing Brazil for either would take away that opportunity, leaving a decent draw from Pot 2 and a decent draw from Pot 4, too.

Nigeria are potentially one of the stronger sides remaining with players such as Asisat Oshoala among their ranks but the recent AFCON champions most likely won’t have enough to bother either team too much.

South Africa and Cameroon would also be expected to be a comfortable match for either while England could also face newcomers Jamaica, the one side from the bottom pot the U.S. definitely can’t face.

There’s not just the matter of who but also where? There’s a distinct difference in how favorable some of the groups are in terms of travel, though not much of an issue for the U.S. who have to travel lengthy distances just for domestic friendlies back home.

With Group A out of the question for both, the options seem to get better as you move further down the groups.

Group B would mean games in Rennes, Valenciennes, and Montpellier, the final leg ensuring a journey between the northeast of the country and the south coast to visit Montpellier, not ideal.

Group C comprises of the same journey with Valenciennes and Montpellier hosting the first two games for the top-seeded side before another fairly lengthy journey to Grenoble close to the border with Switzerland. Another option both sides would surely rather avoid.

Group D is possibly the most bizarre of the options. The first and final games being on the south coast in Nice is ideal for those who want to settle in the same location for a few weeks but the second game being on the northern coast in Le Havre means a journey back and forth, up and down the country just to see the three group games.

Group E is a little less stressful. There’s a trip from Montpellier to Grenoble but at the very least both are in the south of the country and the journey from Grenoble up to Reims for the final match of the group could be worse, too.

Group F certainly offers the most favorable travel options for whichever top-seeded side is fortunate enough to be left until last in the draw. With all three games in the north/northeastern pocket of Reims, Paris, and Valenciennes, it’s a dream draw if you want to skip between cities in little time at all. 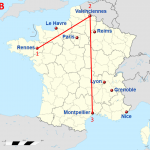 Group B travel for the group stage of the 2019 World Cup. 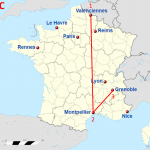 Group C travel for the group stage of the 2019 World Cup. 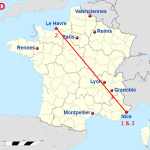 Group D travel for the group stage of the 2019 World Cup. 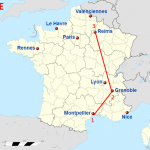 Group E travel for the group stage of the 2019 World Cup. 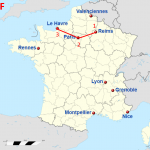 Group F travel for the group stage of the 2019 World Cup.

Joker in the Pack?

While Group D doesn’t offer the kindest travel route for whichever top-seeded team ends up there, there is an interesting side-story when you look further into the tournament.

With eight second-round games but only six groups, it means two of the second-round matches won’t feature a group winner.

Should the U.S. or England land in Group D, they could only face one other group winner before the final and would avoid Germany, Canada, Australia, and each other all the way through to the final in Lyon — something to keep an eye on.