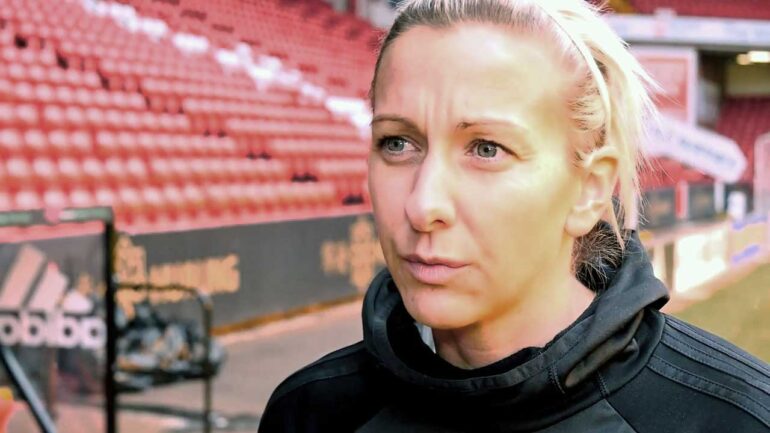 Sheffield United faces their biggest test of the season when they travel to former FA WSL champions and two-time Continental Cup winners on Wednesday night for a game which will likely see Nick Cushing’s side secure their progress to the next round of the cup competition.

Placed into a tough group that includes three FA WSL sides, the newcomers to the FA Women’s Championship are already up against it in terms of quality but the part-time nature of Tier 2 clubs makes life even more difficult for those facing higher-placed opposition this week.

Elsewhere, Aston Villa have to go to Bristol City, Charlton to FA WSL leaders Arsenal, and Joe Montemurro’s side then go to bottom FA Women’s Championship side Millwall next midweek.

With the chances of success already largely stacked against the second-tier clubs, there’s another factor that is causing an issue, one that is particularly affecting Carla Ward’s Blades this week.

Midweek evening kick-offs mean many players around the country will be dashing to even make the game in Manchester on Wednesday and while Arsenal versus Charlton is a 7:45 p.m. kick-off, Sheffield United’s game at the City Academy begins at 7 p.m.

“You would expect The FA to be a little more lenient on kick-off times and when we actually contacted Manchester City to ask them if we could play at 7:45 p.m. because it gives us a chance to possibly have a couple more players available they declined the request,” said Ward, adding, “so we’ve got to go there and make do with what we’ve got.”

In fairness to Wednesday’s hosts, City are likely wary of the Premier League match between Manchester United and Arsenal at Old Trafford at 8pm, ensuring fans have enough time to leave the City Academy before the game across the city ends.

With United already without several senior players through injury and being only able to name three substitutes for Sunday’s league trip to Millwall, Ward could be without several more first-team players due to work commitments, and may have to give several youngsters their debuts against one of the top sides in Europe.

“I’ve said all along the cup is the cup. We can experiment but we’ve certainly got to do that on Wednesday night. 100 percent, I’d have preferred to have the league game against Villa midweek and Man City on the weekend, I think it would help.

“In the other groups you’ve got Charlton versus Arsenal 7:45 p.m., and when Millwall play Arsenal that’s 7:45 p.m. I get Man City want a 7 p.m. to bring in a few younger fans who can then get home earlier, but equally we want to be able to go there and give a good account of ourselves and it makes it more difficult when we have players finishing work at 5 p.m. who can’t get there in time.”

United, though, have already given chances to young players this season and Wednesday could be a good opportunity for them to experience a match against top-level opposition.

Sixteen-year-old Izzy Ford scored on her first full start in the FA Women’s Championship last week against Lewes while 17-year-old Beth Ibbotson made her debut from the start against Millwall on Sunday, putting in a composed performance.

“It will be a good chance for the youngsters,” said Ward. “The only issue is there’s potentially going to be one or two who haven’t kicked a ball in the first team this season. Having said that, the couple that have come in so far have done really well. Beth had her debut against Millwall and did alright and she might play again on Wednesday, we’ll just have to see what we’ve got.”

The situation for United is so critical that Ward can’t yet name her team for the match as she doesn’t know which players are going to be available and which aren’t.

Ward is even considering registering herself as a player if the situation gets bad enough, with the former Sheffield FC captain able to play a range of positions, including center back where United are expected to be down to the bare bones on Wednesday.

“100 percent, it needs looking at next season. It was the same when we went to Man United. We had 10 players warming up, our eleventh player who was starting, arrived late and didn’t have time to warm up and we had three subs turn up literally just before kick-off. When you’re sat in the stands watching the warm-up and you can only see 10 players warming up, it’s a bit of a shambles and it’s not ideal.”