Marta Wins Sixth FIFA Player of the Year Award; Marozsán Hopes to Return in a Month 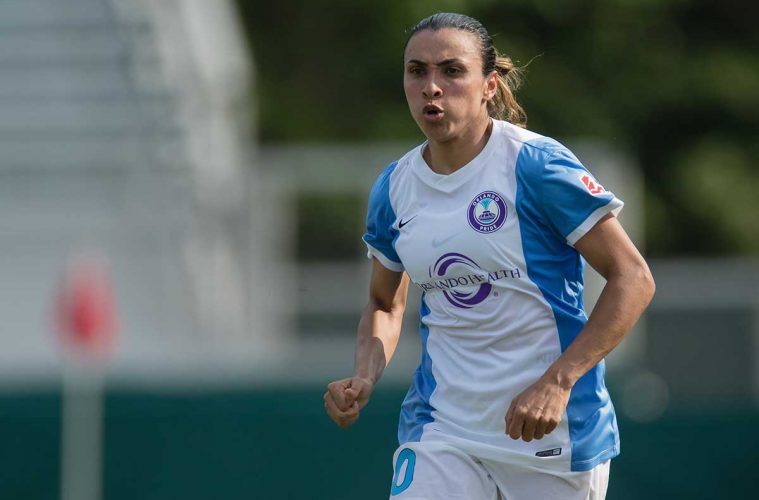 Orlando Pride (National Women’s Soccer League) and Brazilian star Marta was voted The Best FIFA Women’s Player 2018 for an incredible sixth time as she beat both Dzsenifer Marozsán and Ada Hegerberg to the award in London on Monday night.

Marta has dominated the award, winning it five years straight from 2006 to 2010 when it was known as the FIFA Women’s World Player of the Year, but now eight years later has her hands on FIFA’s rebranded The Best trophy for the first time, and she was clearly moved as she took to the stage to speak.

After the awards ceremony, Marta said, “I’m very happy. It’s an award that anyone wants to win and to be here representing my club, my country, and my sport is special.”

The 32-year-old overcame many difficulties growing up in Brazil and the now six-time winner hopes her triumphs can help inspire others to overcome the challenges they face.

“It’s a work of being bigger than yourself. The difficulties I faced when I was a child and when I realized I had the potential to play football is what motivated me and what drove me.

“That’s the message I want to send to people. Believe in your dreams because it’s possible to overcome those difficulties.”

Marta can now look forward to another World Cup with Brazil after the country qualified for the tournament earlier this year.

A World Cup still eludes one of the greatest players the women’s game has seen and Marta says the team has to “work” in order to have a chance.

Olympique Lyon’s Marozsán, who beat teammate Hegerberg to second place by less than half a percent, says she intended to enjoy the evening amidst some time away from playing due to an illness.

Marozsán, also a German international, has consistently been one of the top players in Europe over the last few years but also took the opportunity to congratulate Marta on her sixth title.

“I will enjoy this evening,” she said. “I will spend time with my family and enjoy it, even though I did not win the trophy.

“I’d like to take this opportunity to congratulate Marta who is a very great player. Ada also deserved to win tonight but I am happy to be present at this event.”

Marozsán is yet to play for Lyon this season due to a blocked blood vessel in her lungs that was discovered over the summer.

Whilst at first it was feared the creative midfielder could miss the rest of 2018, the German hopes she’ll be back soon.

“For now, we cannot say exactly when I will be back, but I’m on my way back. It’s going well, maybe in a month or so?”

Marozsán also reserved praise for her club manager Reynald Pedros, who took home the award for FIFA Women’s Coach of the Year.

Pedros only took charge of the team last summer after Gérard Prêcheur left the club and guided the team to both the league and Champions League titles at the first time of asking.

“It’s great,” she said. “I’m happy for him because he’s really good. He did a good job last season and I hope that it will continue this season and we will win a lot of trophies together and be among the nominees again next season.”

Marozsán will also now be joined by a new midfield teammate at Lyon. After the signing of England international Izzy Christiansen, Lyon has also signed Seattle Reign FC (NWSL) and Wales midfielder Jess Fishlock, with the deal announced shortly before the awards ceremony.

Well thought of as a top-class midfielder, Marozsán is looking forward to welcoming Fishlock to Lyon.

“I only heard the news today,” she said. “I’m really happy about her coming because I played with her in Germany with Frankfurt. She’s a great player and she will help us a lot. Welcome to Lyon, Jess!”