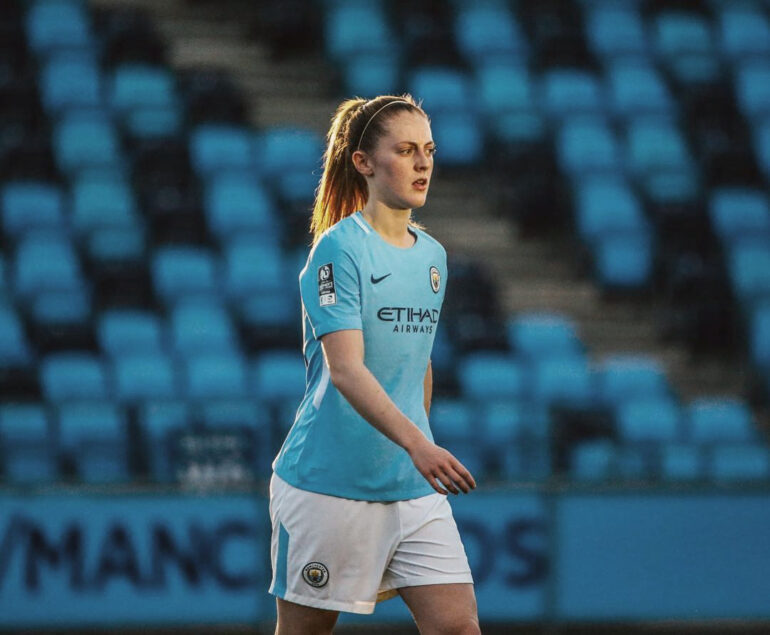 It’s been a big year for Keira Walsh. The 21-year-old has become a regular in the Manchester City midfield over the past four years but the last 12 months have seen her make her senior debut for England, culminating in her captaining the side for the first time in Kazakhstan on Tuesday night.

Now Walsh is back on club duty and preparing to face arch rivals and defending champions Chelsea, the Blues snatching away City’s title with a sustained run of form which saw them go the FA WSL season unbeaten, emulating City’s same achievement in 2016.

But after a trip across the pond to Miami and games against top caliber opposition such as Paris Saint-Germain and Olympique Lyon, Walsh says the mood is “positive” ahead of the biggest of kickoffs.

“We had a really good preseason,” she said. “We were the first English team to go to Miami (in the Women’s International Champions Cup), so all the girls really enjoyed it and we played some good opposition.

“All the team is looking forward to the season and I think our aim is to push on and win the title, but Nick’s [Cushing] made a point of focusing on one game at a time and not getting ahead of ourselves in that respect.”

That one game-at-a-time philosophy means it will be all eyes on Chelsea this weekend as City look to turn the tables on the team that beat them to the title last season.

Up until the last campaign, Cushing’s side had a positive record against Chelsea but Emma Hayes and her team turned the tables last year, despite two draws in the league.

In the away match, Chelsea were 2-0 up and cruising before a late comeback while the cup matches were shared. City beat Chelsea in the Continental Cup semifinal but Chelsea got their own back with a comfortable victory in the FA Cup semifinal.

“Chelsea are a top team, they’ve got some brilliant players and we respect them, but I don’t think there’s any one team in this league that is totally dominant. Chelsea won it last year; we won it the year before. I think Chelsea are going to be challenging for the title, the same as us, but you’re going to have to play them at some point during the season, so I don’t think it really matters when we play them.”

In order to bridge the six-point gap which separated the two sides at the end of last season, Cushing has turned to the transfer window to continue implementing his desire to sign the best young British talent and those more established, experienced players from abroad.

After handing in a transfer request, Nadia Nadim is still at the club and duo Megan Campbell and Pauline Bremer are both back fit after lengthy layoffs.

Regarding the new signings, Walsh believes all of them will have a positive impact on the squad for the coming campaign.

“With Lauren Hemp, we’ve not really experienced much of her with the team so far because she’s been away at the [U-20] World Cup,” she said. “But I’ve seen she’s been one of England’s best players and she’s had a fantastic tournament. In terms of the rest of the girls, Tessa has added probably an edge of competitiveness; she’s experienced Champions League finals [with Wolfsburg] and a lot of things playing for Belgium, so she’s added that sort of competitiveness and willingness to win.

“Caroline Weir’s quality is second to none and her deliveries are going to add an extra edge to us this season, I believe. Gemma Bonner was captain of Liverpool so she’s also got experience. She’s a good teammate and a good girl to have around the training pitch.”

But before a new season can get underway, Walsh, her teammates, and the club staff had to evaluate what ensured City came away from a season with no trophies after previously holding claim to all three domestic competitions.

Cushing often spoke during the last campaign about the hectic schedule, so has the club got to the bottom of the issues?

“Yeah, we always have a meeting; the staff have a meeting and then the players. We discuss where we went wrong and also what we did well, because it wasn’t all negative, and then what we’re going to take forward into the new season, what we can improve. Just taking it game by game this season really.”

Fatigue could become even more of an issue this season. While Cushing just about has a larger squad to call upon, the team will have extra league games with the addition of West Ham and Brighton to the league and Walsh and several of her teammates have a World Cup to think about once the domestic campaign comes to an end.

“I think our sports scientist did really reiterate that to the girls; that it is important to take a long rest in the summer, because the majority of us probably won’t get that this year. But if you’re a top team and you’re going to be challenging for a lot of the trophies, you expect to have a lot more fixtures.

“I think we had a look preseason at how we could manage that better, and for the players, how we can get to the end of the season and not be as fatigued as we were last year. That is something we’ve spoken about, but it’s going to be a long season and the girls are really focused on taking a rest when and where they can really.”

City already has two competitive matches under their belts, as do their opponents Chelsea. Walsh’s side faced a tough Continental Cup match at Birmingham City before a 4-0 home win against second-division side Leicester City, where the majority of regular starting members of the team were rested.

Cushing has won the trophy twice during his four-year spell in charge of the club and Walsh admits the tournament does have a “special place” in the team’s minds.

“I think no one’s spoken about it being a competition we don’t want to win. Obviously, it was the first trophy we ever won as a team [in 2014], so I think it’s one that we want to win, but Birmingham are a tough team, so for us, it wasn’t a warmup for the league. It was straight in there and from the first game, we wanted to win.”

Marc Skinner’s side put a serious dent in City’s title hopes last season when an Ellen White double saw the Citizens crumble to a 2-0 defeat which left them trailing Chelsea for the rest of the season.

But a much improved performance last month saw Walsh and her teammates hold out for a 0-0 draw and a win on penalties, preparing them nicely for another tough game at Kingsmeadow against the champions.

“I think it was a positive result but some of the girls were frustrated after the game,” she admitted. “From that game, we need to take away that we do need to be more clinical. When we regain the ball higher up then that’s something we need to look at. Creating more chances in front of goal, that is something we have spoken about since after the game, but to win on penalties, Birmingham isn’t an easy place to go.

“We’ve got to give them respect in that sense; we weren’t just thinking we were going to win. They’re a tough team and they’ve got some top players. The girls weren’t too disappointed because we know the quality Birmingham do have.”