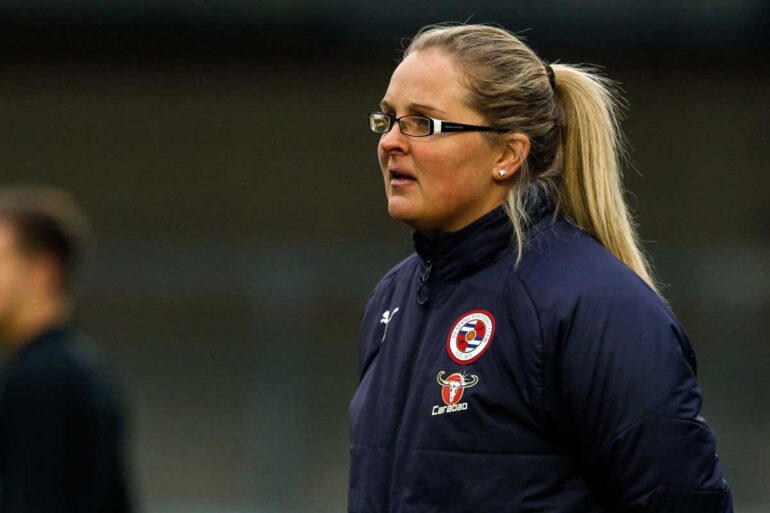 Reading manager Kelly Chambers says preseason has been all about preparing her side for new challenges this year as they look to raise the bar further after an impressive fourth-place finish last time out.

The Royals were best of the rest behind Chelsea, Manchester City, and Arsenal, and at one stage were even outsiders for the FA WSL title after picking up some impressive results, including a 2-0 win away at Man City.

“After analyzing last season, I knew I needed a bigger and stronger squad and that’s not always easy when you have to let players go,” said Chambers, regarding her recruitment.

“For us to push each other I needed that bigger squad and make sure our bar raises more than it did last year.”

Mary Earps’ departure to Wolfsburg was the only blot for Reading this summer but it appears Chambers has developed a squad that can at least sustain what they achieved last season.

“The signings have settled in great. We play such a certain style of football it’s taken them a while to bed in but socially they’ve slotted in like they’ve been here for many years. That’s nice because that’s us as a club. We’re very inviting and we’re a very welcoming club, even on the pitch they’ve been growing week on week.”

Regarding the coup of Davison arriving from champions Chelsea, Chambers added, “Gemma has that experience, that understanding of how to win things. Wherever she’s been she’s come away with different medals and the caliber of player she is, she brings us something different.”

It isn’t just off the pitch where Chambers has been preparing her side for the new season. With several new teams in the top division and Reading hopeful of a more sustained cup run, Chambers is realistic when discussing that her side may face a more hectic schedule than in past seasons.

A preseason tour to the Netherlands was key to that preparation, as the manager explains.

“We took the tour to prepare what we will face this season,” she said. “We had three games in a week, which we’ll face in the season, so it was a case of really testing the players. Last season we had Chelsea and Man City in the same week so we know we’ll be tested mentally as well as physically and we did that on our tour.”

Chambers added, “When we found out about the league getting bigger, we knew straight away it would bring more exciting games and more challenges. Chelsea and Man City, the amount of the games they had last year, it will be even more challenging this season but for us it’s nice to have more games. It will be more of a challenge and what we achieved last year will be even harder this year, but we need to make sure we raise our standards with everyone else.”

While the restructure means Reading will now face new sides such as West Ham United and Brighton and has already seen them face Casey Stoney’s Manchester United in the Continental Cup, Chambers admits it’s “disappointing” to have lost clubs including Sunderland, Doncaster Rovers Belles, and Sheffield FC.

“Those clubs have been part of our game for a very long time” said Chambers, before adding, “But if we’re going to class ourselves as professional everything has to be professional. The standard of refereeing, which everybody picked up on last season, that needs to grow with the game. The professionalism on the pitch is there, every game is exciting, you never know who will walk away with the points.

Reading kicks their season off this Sunday at home to a Yeovil side that finished last season bottom of the league and who didn’t pick up a win during the entire season.

While it may look like the perfect start for the Royals, Chambers is thinking long-term and what her side can achieve this season after admitting fourth was actually what the club were targeting for the 2017-18 campaign.

“We set ourselves a target of fourth last year and we were even close to nicking third. We’d have admitted that was an over-achievement but coming fourth shows how well we’ve delivered things on the pitch and the effort the girls are putting in week in, week out. I don’t feel our results were down to luck, our tactical play and our girls delivering on the day to get that result.”

Aside from players like Allen, Bruton, and Harding who all had a big influence on Reading’s performances last season, a big chunk of it was also down to England international Fara Williams.

The 34-year-old was seen as quite a coup after departing Arsenal and already kicked off her new season in style with a hat trick in the cup against Durham. There doesn’t appear to be any secret to Williams’ rise in form again, just simply being in a good environment.

Fara just wanted to be coached,” admitted Chambers. “She wanted to fall in love with the game again but she still has that hunger. When we met with her it was a case of she showed her ambitions of what she still wanted and that aligned with what we do. We coach players and that’s shown in Fara’s performances.

“Traditionally, she’s always played as a deeper midfielder but Fara can still run. She’s loving every single minute and I think that’s shown in the last twelve months. If anybody understands the game, they can see she’s very selfless in that she does a lot of work for other people to get on the ball, but when she gets on the ball you know she’ll do something. That’s a luxury she’s brought to us and I’m glad we’ve been able to rejuvenate her career to an extent.”