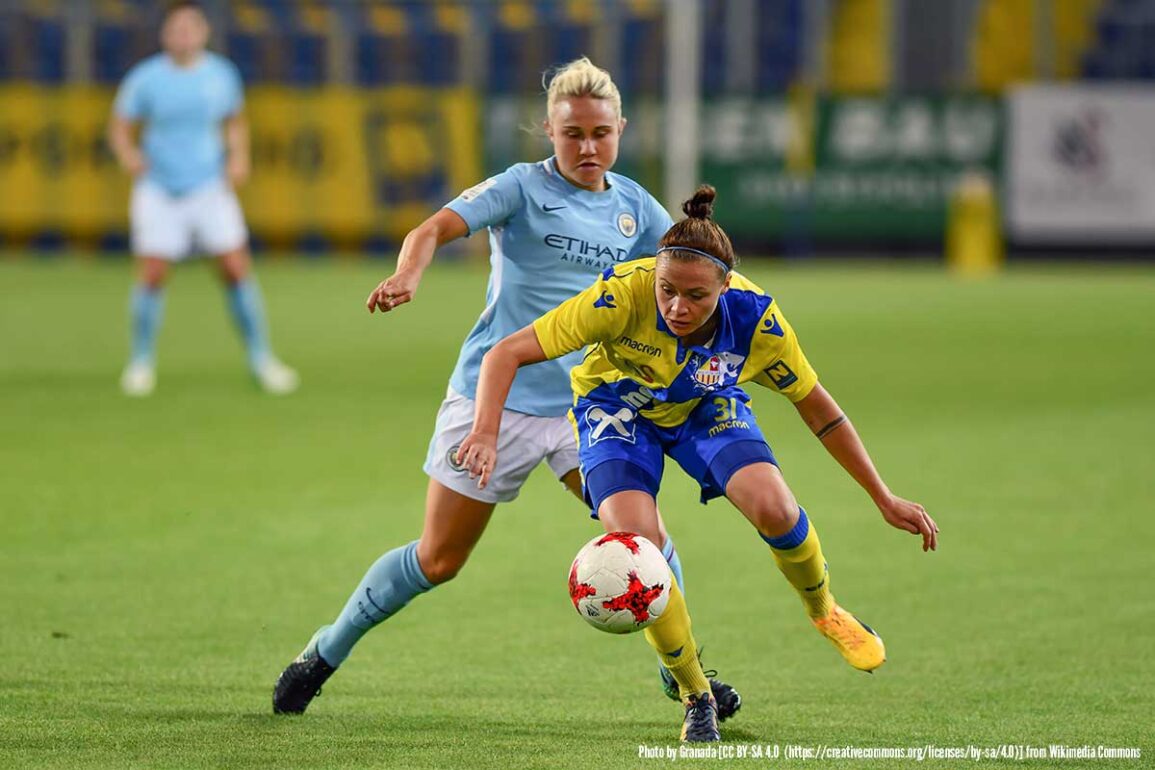 There was much skepticism on Saturday morning when news broke of another England international heading abroad, another to the French city of Lyon, a city perhaps known for its cuisine and gastronomy rather than it’s women’s football side in historical context, but the modern-day breeding ground for any top player.

That skepticism level rose because the player was Manchester City’s Izzy Christiansen, a midfielder not always a regular for her club toward the end of last season and one who hasn’t always held down a place in the England team.

It also came just days after the news Dzsenifer Marozsán could potentially miss the first half of the season through illness, a fractious blow to a side that may well be champions of Europe, but one that has also lost midfielders in the form of Kheira Hamraoui, Camille Abily, and Morgan Brian over the summer.

Was the 26-year-old a quick fix? A player easy to pry away from her current club due to lack of first-team games?

The reality is somewhat different. First, teams like Lyon don’t operate in that way and as much as clubs, players, and agents wish transfers were completed in a matter of days, that’s not the case.

It also dumbs down Christiansen’s attributes. The midfielder scored 18 goals in 61 appearances for a club that, despite its successes, has never been one for scoring five or six a game, unlike their French counterparts.

Overrated? Underrated? Nobody really knows. Christiansen is a bit of an enigma, a shadow in the grand scale of women’s football in England. A happy-go-lucky, smiley footballer who enjoys the game but has always had an ambition to play abroad.

The former Birmingham midfielder batted away attention from Germany’s Bundesliga and the United States’ National Women’s Soccer League to sign a new deal with City last summer with some midfield competition leaving the club, such as Carli Lloyd and Kosovare Asllani.

Christiansen’s career so far has been a long way from being a disappointment. At 17 she was part of an England side which won the 2009 U-19 European Championships and before her teenage years were complete she was playing Champions League football for Everton.

After five reputation-enhancing years at Birmingham, Christiansen became one of the first signings for Nick Cushing’s new-look Manchester City side.

Not as well-known perhaps as the original “Big Four” signings Karen Bardsley, Steph Houghton, Jill Scott, and Toni Duggan, Christiansen’s arrival perhaps went under the radar; not as famous as the bigger and more established names signed before her.

But Christiansen’s impact on Man City should never be understated. She scored the goal that clinched the club its first trophy, the 2014 Continental Cup, in a 1-0 win over Arsenal.

Christiansen didn’t do enough to work her way into the England squad for the 2015 World Cup but former head coach Mark Sampson would hand her a much-anticipated debut soon after in a qualifier against Estonia.

Christiansen scored on her debut in an emphatic 8-0 win, and while 24 caps have come since, Christiansen has started just half of them with just four more goals to add to her tally, all in friendlies or qualifiers against weaker opposition for Euro 2017.

The midfielder did go to Euro 2017 but outside of 90 minutes against Portugal in which Sampson rested his entire first eleven, Christiansen saw just 21 minutes of game time in the other four matches and was an unused substitute in knockout games against France and Netherlands, even after Jill Scott’s suspension for the latter encounter.

Always the bridesmaid and never the bride? Perhaps. When Toni Duggan felt the heat for an Instagram image posted with then Manchester United manager Louis van Gaal, few even registered City teammate Christiansen in the same image.

Christiansen’s City career should theoretically tell another story. One of successes, both personal and as part of a team. After the highs of the 2014 cup final, Christiansen was City’s top scorer with nine league goals during the 2015 campaign before an injury and the start of 2016 put her on the back foot.

Christiansen scored four goals in the second half of 2016, helping her side win the FA WSL for the first time, along with the Continental Cup once again.

Then the midfielder was presented with another challenge, the arrival of U.S. superstar Carli Lloyd. The move saw Christiansen become nothing more than a bit-part player throughout the 2017 Spring Series who didn’t manage a single goal.

She still played her share of games, particularly when Lloyd’s flailing elbow won her a three-match ban, but Christiansen did serve a timely reminder of her credentials with a top performance in the FA Cup Final at Wembley, a performance she capped with a first-time finish into the top corner from the edge of the penalty area.

Whenever faced with a challenge, Christiansen bounced back. She scored two goals in a preseason match against Lyon and it would be a taste of things to come as the midfielder started the new campaign like a house on fire.

Several penalties contributed to her lofty goal tally and while City may have ended the season without a trophy, Christiansen scored 12 goals, just two behind eventual club top scorer Nikita Parris.

But once again Christiansen could never hold down a regular first-team spot. An injury going into the new year presented youngster Georgia Stanway with an opportunity to take Christiansen’s spot in the team.

Stunning goals in the cup against Birmingham, Champions League against Linköpings, and best of all, a late equalizer against Chelsea in a crunch league match ensured Stanway was rarely dropped and Christiansen left largely having to make do with a seat on the comfortable CFA bench.

But behind the scenes, Christiansen’s talents, her eye for goal, and her work rate on the pitch hadn’t gone unnoticed.

European giants Lyon had noted Christiansen’s performances against them — City and Lyon had met three times in quick succession before two more meetings in April 2018 — and were more than interested in doing a deal once the new year kicked in.

This wasn’t a panic move due to Marozsán’s illness, it was a carefully calculated maneuver for a player perhaps more highly-rated deep within the game than she is on the fringes of it.

It was a very different deal to the one Lyon did 12 months previous with Cushing and City for Lucy Bronze. The club was desperate to keep hold of who many consider the best full back in the world but Bronze had just six months left on her contract and Lyon dangled a Pauline Bremer-like incentive in front of City’s noses.

For Christiansen, there would be no swap, just cash. The midfielder’s new long-term contract signed last summer put City in a good position. The club was open to selling for the right price, they knew they had a star talent in Stanway and had already signed Christiansen’s replacement in Caroline Weir, knowing full well their midfielder may not be with them come the end of the summer.

Lyon accelerated talks around four weeks ago and a deal was finally struck late last week for Christiansen to become the club’s new No. 8. Christiansen traveled to Lyon last Friday with her representatives to sign the contract and undertake her medical before taking in a preseason friendly against Fulham with her new teammates.

So, from the shadows, Christiansen is now into the light and the whole world is watching. With Lyon’s midfield issues there’s a definite belief by those close to the player and some of her teammates that she will be a regular for the team and not necessarily dependent solely on when Marozsán returns from injury.

Yet questions remain from some over her credentials to play for Lyon. It’s a make-or-break move that could push her career into top career. Her first senior World Cup could be on the horizon. A year on Lyon’s bench won’t help her move Jordan Nobbs, Karen Carney, and now Fran Kirby out of the way, but a couple of trophies and a double-figure goal tally for the best in Europe will push the Macclesfield-born star right to the forefront of Phil Neville’s mind when selecting his squad next summer, England’s qualification still pending of course.