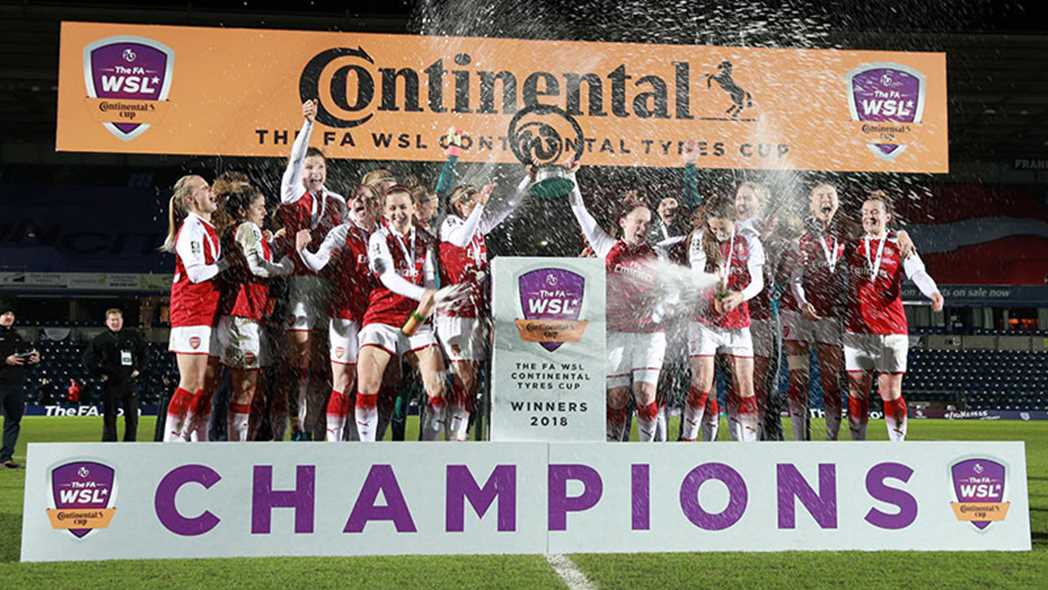 Wednesday night’s Continental Tyres Cup final produced a series of rarities for Manchester City as Arsenal picked up the trophy for the fifth time after Vivianne Miedema’s first-half goal stood as the game-winner. It was an occasion that showed Arsenal’s continued progress under Joe Montemurro.

It was the first cup final Nick Cushing’s side have lost after previously won the tournament twice themselves, in addition to last year’s showpiece FA Cup final at Wembley. It also ensured the first time the club has gone three games without a win since April/May 2015, a span of almost three years.

While a determined second-half performance on balance ought to have been enough to earn City extra time, they never created a clear opportunity to test Arsenal’s Sari van Veenendaal. After starting slowly in their last league game against Chelsea before the international break, Cushing had some harsh words in his post-match press conference.

“In my first meeting with the players in preseason I told them it’s getting harder and harder to win every year,” he said. “Every team is going into Europe and signing the best players, teams have a bigger squad than us but we’re always going to stick to our strategy. We want the young players from England, we want to develop them and we believe we can continue to win with them.”

Cushing stayed true to his word when the teams were announced before the game with teenage goalkeeper Ellie Roebuck keeping her place in goal despite the return of Karen Bardsley, while the in-form Georgia Stanway was awarded a start over both Mel Lawley and Claire Emslie.

Neither could take any blame for the defeat. Roebuck was beaten by a clinical Vivianne Miedema effort but found herself with little more to do while Stanway proved much more effective when moved central during the second half.

The holders looked better after the introduction of both Jane Ross and Emslie early in the second half but Cushing admits another slow start cost his team.

“You have to start the game with the will to win and we haven’t done that over the last two or three games,” he said. “I’d like to think I don’t have to do anything [before Sunderland], I’d like to think my job is done but I thought that tonight after the Chelsea game and we didn’t win. Maybe we have to go back to basics, back to what we’re well known for.

“The players know I’m honest. Maybe we’ve been spoilt, the players have been spoilt over the last two years with the games we’ve won. The reality of this game is nobody always wins, I’m a realist and I know that, every team is going to be motivated by your success.”

Coming into the game on a run of six games without conceding a goal, Arsenal was always going to prove tough opposition in a competition they’ve had their name on four times in the six seasons before Wednesday’s finale.

New manager Montemurro said in the buildup to the game he wanted to get “belief” back into the Arsenal squad, something both he and midfielder Jordan Nobbs now believes has been done after overcoming their rivals at Adams Park.

“Definitely,” said Nobbs. “This final over any other one has been important to me and the team. It’s not to say we’ve had a tough few years but I think teams have started to not talk about Arsenal and it’s like, ‘Well, why aren’t they?’”

Montemurro added, “What tonight has done is instill a lot of belief that we can compete. The league here is a very tricky league, I think it’s one of the best in the world; whoever you’re playing you have to find solutions.”

On his own team’s performance, Montemurro used Daniëlle van de Donk in a deeper role alongside international compatriot Dominique Janssen, a move which gave Arsenal more defensive stability and allowed Nobbs to push higher in the No. 10 role behind Miedema.

It culminated in a solid performance, a seventh clean sheet on the bounce, and a first trophy in English football for the former Melbourne City manager.

“It’s seven games now without copping [conceding] a goal,” he said. “We’ve focused on managing that well but you don’t limit it to the back four. Our midfield did well and we defended from the top, we limited them to a couple of headers on goal and we’re very proud of that.

“We caused some problems dragging their back four into midfield, we had players of different heights and they didn’t know whether to go to Viv or Kim [Little], and it gave Jordan some space in behind; we tried to achieve that and we did in the first half.”

Nobbs echoed her manager’s sentiments, praising her midfield teammates and admitted it was better for her coming back from an injury picked up before the international break which kept her out of Phil Neville’s first England squad.

“Both of them had a role a little bit different today and I was higher up, it was a great place for me to be coming back from an injury,” she said. “The work rate and grit they put in showed why they’re top players. DVD performed brilliantly, she couldn’t have run any more if she tried and they fed me the ball a lot.

“First half I thought we were tremendous as a team, we played the way we wanted to. They came at us in the second half and we showed a different side to us, a side maybe people haven’t seen before. It wasn’t pretty and we had to be aggressive, but maybe a long time ago we’d have let a goal in — tonight we didn’t.”

An ongoing talking point heading into the game was players called up to international duty and those who weren’t.

Several Arsenal players were withdrawn from international duty ahead of the cup final while Cushing’s side saw nine of their players travel to the United States after Abbie McManus, Ellie Roebuck, and Georgia Stanway all received late call-ups to the squad.

Cushing said after the team’s last game against Chelsea that his players weren’t in good condition and clearly wasn’t happy with the situation post game, but didn’t want to use tiredness as an excuse for defeat.

“I’ve always said I’m going to try and not pull on excuses and the schedule. I don’t think to say it’s tiredness, it’s an excuse. When you show that second-half performance from us tonight it becomes an excuse.

Montemurro, though, turned the tables on the perspective of his players being well-rested for the occasion, suggesting the reason his side found themselves dropping so deep in the second half was down to a lack of match fitness.

“We lost a little bit of distance between the lines in the second half,” he said. “We expected that because we had four or five players who haven’t played for a few weeks and there’s a bit of match fitness that needs to get into some of these players.

“We were always going to get players who were going to tire, we just got deep and with the quality of Man City they’ll find the spaces. Finals are about emotion, they’re not pretty, you’ve just got to get the result.”

Nobbs also accepted the team weren’t naïve enough to expect they could control the game for 90 minutes and they made it clear to themselves at halftime that City would eventually have a sustained spell of pressure.

“We said at the break there would be a time where the other team are in the game, that’s just fact. We had to be diligent because we saw City come out and play in the second half against Chelsea so we knew at times it would be tough.”

Making her return to the team after a month out with an ankle injury, Manchester City captain Steph Houghton was as disappointed as anyone post game and like her manager admitted the team need to look at starting games quicker moving forward.

“The first performance wasn’t good enough,” Houghton said. “That’s something we’ll have to look at, we need to start games better and get control earlier than we’ve been doing. We’ve got to use the pace and power we have to get at teams better. We love to have the ball but you’ve got to earn the right and that’s maybe something we haven’t done over the last few games. We have to be humble about it and make sure we’re honest in the way we work.”

Houghton also said the team has to accept their status as the team to beat and drew on her experience of being a City player in 2014 when Arsenal were the team everyone was looking to beat.

If there was a silver lining to come away from the game, the 29-year-old also admitted it could be a “great experience” for the club’s younger players moving forward.

“The likes of myself, Jill [Scott], KB [Karen Bardsley], and Beatts [Jen Beattie] have got to get around the team, rally them, and make sure we don’t take the foot off the gas and keep proving to people that we are a good team.

“People do want to knock you off your perch, I’ve been a part of that at Arsenal and we at City wanted to be that team here in 2014. We know the position we’re in and that goes with the trophies and the runs we’ve gone on. We have to find a way to improve.

“It’s tough for the younger girls, the environment is tough and the young girls are fortunate to be in a position of training full-time and they’ve probably not had the experience we have as senior players, but that’s why women’s football is where it is, so hopefully as a squad we now go forward and say ‘Okay, we want to be better,’”

Like Nobbs, Houghton also came into the game after missing international duty due to an ankle injury she admits still hasn’t fully healed despite completing 90 minutes.

“It’s been a frustrating time. It wasn’t a simple ankle injury, it’s still ongoing. I trained once in five weeks before the final but I wanted to be out there to try and help my team.”

Nobbs meanwhile now has eyes on a good run to the end of the season and the possibility of getting Arsenal back into the Champions League.

The Gunners sit six points behind City and seven behind leaders Chelsea with a game in hand on both and with both having to visit Borehamwood before the end of the season.

While under no illusions it’s a difficult task ahead, Nobbs isn’t giving up.

“We’re looking at Champions League, if we keep performing and not conceding we have a great chance. It’s an uphill battle but we’re in a great run of form and Joe has brought that belief back to us — things have changed.”

Having worked for the City Group with Melbourne City in Australia, Montemurro did have some kind words for his opponents to finish on after the game.

“I know Nick and Gavin [Makel, City’s Head of Women’s Football] and the City Group do a great job, they were great people to work for. I think if we had more Manchester City women’s teams around the world, the game would flourish”