Paul Riley, head coach of the North Carolina Courage, and Elizabeth Eddy walking out for pregame warm-ups at the 2017 NWSL Championship.

Debinha of the North Carolina Courage taking selfies with fans at the 2017 NWSL Championship.

Sam Mewis, midfielder for the North Carolina Courage, during pregame of the 2017 NWSL Championship.

Christine Sinclair and Adrianna Franch pregame of the 2017 NWSL Championship.

Hayley Raso and Jaelene Hinkle vie for the ball during the 2017 NWSL Championship.

The Thorns celebrate Lindsey Horan's 50th-minute goal puts them in the lead in the 2017 NWSL Championship.

Amandine Henry and Abby Dahlkemper vie for the ball.

Kristen Hamilton tries to get by Tobin Heath in the 2017 NWSL Championship.

Adrianna Franch in net for the Portland Thorns during the 2017 NWSL Championship.

The Thorns celebrating with the Rose City Riveters after winning the 2017 NWSL Championship.

Tobin Heath celebrating with the Thorns fans after winning the 2017 NWSL Championship.

Nadia Nadim goes out a winner with the Portland Thorns.

The Rose City Riveters during the 2017 NWSL Championship.

Adrianna Franch and Meghan Klingenberg after the 2017 NWSL Championship.

Christine Sinclair after the 2017 NWSL Championship. 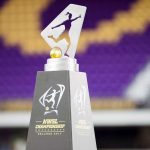 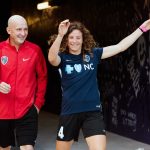 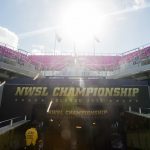 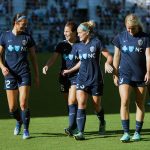 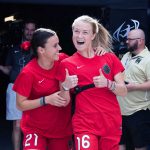 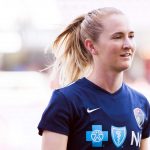 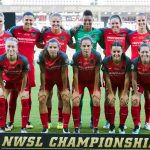 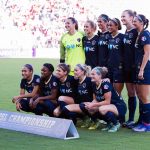 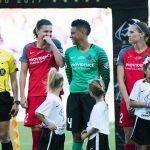 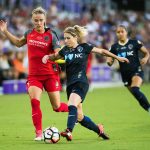 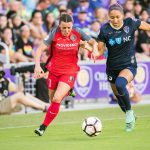 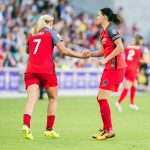 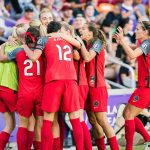 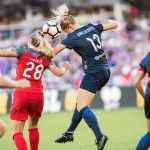 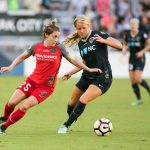 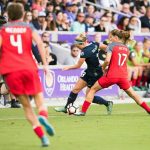 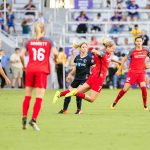 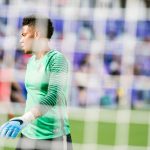 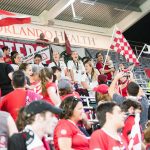 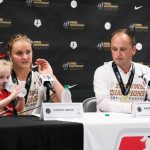 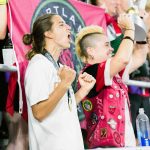 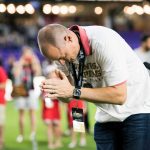 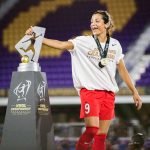 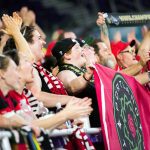 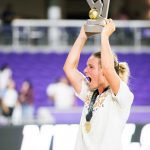 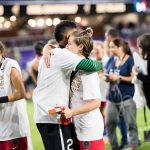 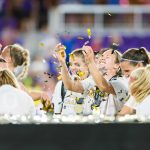 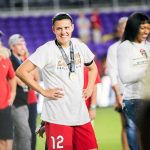 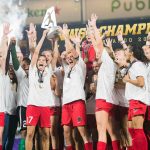 But they all count.

And count this one does. On a warm late afternoon in Orlando, Florida, the Portland Thorns won their second National Women’s Soccer League (NWSL) title with a 1-0 win over the North Carolina Courage. To say the Thorns did it with style, to say the game offered a glimpse into any style really, would be generous.

Soccer, sometimes like history, has a way of repeating itself.

Then, in 2013, the Thorns went into Western New York to take on the Flash, the precursor to today’s Courage team, and came out inaugural NWSL Champions after a choppy, tense affair that saw 28 total fouls committed, including a sending-off after Portland’s Kat Williamson received two yellow cards, and ended in a 2-0 scoreline. Now, it would be a choppy and sloppy match with a total foul tally of 24 and three yellow cards.

Then, it was goalkeeper Karina LeBlanc celebrating with Portland’s traveling fans. Now, it would be Adrianna Franch heading into the stands to celebrate with the traveling Rose City Riveters. (Coming full rhombus, Franch was the losing keeper for the Flash in 2013; the Courage’s McCall Zerboni was a Thorn during the 2015 season before finding her way back to the Flash, and now the Courage.)

Then, it was Tobin Heath with a dazzling free kick in the 40th minute to open the scoring. Now, no free-kick decider by Heath but she still played a pivotal role in the match nonetheless.

In the second minute, Heath fouled Taylor Smith from behind that saw Smith land awkwardly. Smith shouldered on but was eventually forced out of the game in the 12th minute with Makenzy Doniak replacing her. Forward Kristen Hamilton dropped back into Smith’s right back spot and Doniak positioned herself in the midfield.

Sam Mewis almost had a goal-of-the-season contender in the 14th minute when she intercepted Franch’s clearance and launched a left-footed shot that had the goalkeeper beat but not the crossbar. The ball popped up and down into Franch’s hands.

The Courage’s formation necessarily changed with Smith off the field and Hamilton forced into defense. After opening up in a box midfield that proved effective against Chicago in a 1-0 semifinal win, the Courage switched to a 4-3-3.

In another blow for North Carolina, Hamilton was subbed off in the 39th minute after a collision with Heath. Jessica McDonald entered the game and Doniak fell back into defense.

Chippy play continued throughout in the first half, with no rhythm established and the teams went into halftime locked at zero.

The Thorns broke through in the 49th minute after absorbing early pressure from the Courage to open the half.

The match’s lone goal came off a set piece. Defender Emily Sonnett served a ball into the box that Amandine Henry got a wisp of a hair on to cause the ball to skip through the Courage defense. The ball bounced to a wide-open Lindsey Horan, who buried a one-time half-volley past Katelyn Rowland near post to put Portland up, 1-0.

The match opened up as the Courage chased the game. North Carolina would have its chances, ending the match with a 16 to 4 advantage in total shots, but efficiency is a great leveler and Portland converted on its chances.

One of North Carolina’s better chances came in the 82nd minute. Jaelene Hinkle played a long ball over the top to McDonald, who had made a run in between Sonnett and fellow center back Emily Menges. McDonald muscled Menges off the ball and got to the bouncing ball first, cutting back in for what looked like an open shot on goal. Menges recovered well and denied McDonald in what might have been the equalizing goal.

After the game, Menges was honest about the play: “I got myself into that problem, let me remind people of that, but everyone had plays like that, just because mine’s in front of the goal doesn’t make it more impressive than somebody else’s up the field. It was a team effort today for sure.”

The play encapsulated the play of Portland’s overlooked back line all season long. The hard-nosed play was necessary in the match’s waning minutes as North Carolina desperately tried to equalize.

Portland’s defense held a furious final minutes, and Horan’s goal stood as the game-winner and earned the midfielder MVP honors.

The Thorns fell two points shy of the Shield but surely none of that matters now as Portland returns home as two-time NWSL champions, adding another star to its crest.

Ebbs and flows are expected in matches but the chippy play didn’t allow either team to establish a consistent rhythm.

In the postgame press conference, North Carolina Courage head coach Paul Riley was matter-of-fact in his assessment of the physical play allowed by referee Danielle Chesky when asked about the Thorns’ players “clattering into yours all over the place.” Riley acknowledged the physicality disrupted his team’s attempt to find their rhythm:

“Well, I’m glad you said that, not me. I mean, yeah, they were physical, overstretched from physical, might have been more than physical. I think they had more tackles than passes in the first half, so they got into us and it looked like it was their game plan and unfortunately, it did knock us out of our rhythm.”

Portland head coach Mark Parsons had a decidedly different view. Parsons said the coaching staff had held the players to non-contact training for two weeks heading into the playoffs to avoid injury. As for a physical game plan going into the game? Parsons said there was none.

“If there’s a reason we had an extra spice today, it’s because they haven’t felt contact for two weeks in training.”

Going Out on Top

Portland players Amandine Henry and Nadia Nadim leave the league as champions. Henry will return to France’s Olympique Lyon while Nadim will head to Manchester City in the FA Women’s Super League.

Both were ecstatic in the postgame mixed zone.

“This is fantastic. Obviously, when I signed in this league I want to win it, and I know this is the toughest league in the world. Yes, standing here with the trophy and medals — amazing and the best way I can end this journey,” said Nadim.

Nadim has had quite a year on the international side as well with Denmark making the Euro 2017 title match but falling short to winner Netherlands. The NWSL title ranks highly up there, however.

“I rank it really high. I mean, I’ve had a really good year even though it started hard and I had a lot of injuries. This summer was awesome, we [Demark] were in the Euros final and now in the final again and this time, won, so it’s been awesome,” she said. “I feel I’ve grown as a player and this kind of shows [it]. Decent year [laughs], hope next year is going to be better! [laughs]

For Henry, the decorated midfielder said the league was difficult and she was surprised at the physicality.

“It was very, very difficult because in this league, you can win versus the first, you can lose against the last,” Henry said, “and it’s a very competitive, and I’m surprised about the physical [how physical it is].”

Henry returns to France and ranks the entire experience as one of her favorites.

“One of my favorites because it’s the best time for me and my teammates and my experience on the field and outside [off the field]. It was two years, very nice.”

I understand that broadcast logistics makes some of the venues undesirable but the league should seriously consider returning the location of the championship match back to the NWSL Shield winners. Orlando was a terrific host and the facilities are excellent but only 8,124 showed up and in last year’s final in Houston, only 8,255 saw the Western New York Flash win the title.

All images by the terrific Monica Simoes.