Nikita Parris Looks to Build Off of Euros Experience 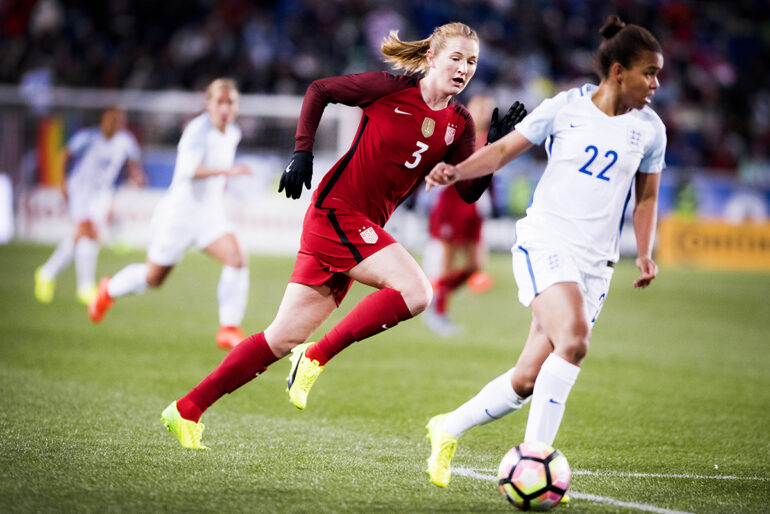 The buildup to England’s opening World Cup qualifier against Russia hasn’t been all plain-sailing. Allegations surrounding head coach Mark Sampson have left a dark cloud over a European Championship performance that saw the Lionesses reach the semifinals, but for the 28 players called up, it’s had to remain business as usual.

It has to be, opponents Russia almost came through a tough group in the Netherlands, beating Italy but falling just short of pipping either Germany or Sweden to a spot in the top two. Under 38-year-old Elena Fomina, Russia have proven a stubborn opponent and only a last-minute Toni Duggan equalizer spared England defeat in their last meeting at Euro 2013.

Like Duggan, Nikita Parris will be returning home to Merseyside on Tuesday night when the teams kicks off at Tranmere’s Prenton Park, the Manchester City winger gaining her first taste of major tournament football during the summer under Sampson.

“It’s definitely a big occasion for myself, Toni and Alex [Greenwood],” said Paris. “It’s inches from where I grew up, I was born in Toxteth, Toni in Everton, and Alex in Bootle. It’s a very special occasion for all of us but it’s about getting that first three points.”

With this being the first time the squad have been together since the Netherlands, it’s also proven to be a period of time that has allowed them to sit down and discuss what went wrong in the summer. Four wins of four, including a first win in nearly half a century against France, saw England go into their semifinal against the hosts in top form.

But a 3-0 defeat to Sarina Wiegman’s eventual champions left question marks against Sampson’s name, even before the latest storm around alleged comments made to Drew Spence and Eni Aluko became public.

“We’re in the process of looking at what went wrong,” said the 23-year-old. “Reviewing as a team what we could have done better and where we can push on. Ultimately, we got to the latter stages but we fell short, we know there’s room for improvement and where we need to improve as individual players. Collectively, we’ll come to an agreement once we’ve all had our chance to speak.”

So, what have the squad identified so far as the reasons for August’s 3-0 hammering? While the Lionesses had chances to get back in the game after falling 1-0 down, a defensive error and a late break made the game appear more one-sided than it was, but the result undid all England’s good work throughout the tournament.

Parris said, “We need as a team to be more confident on the ball, to break teams down and I feel that will come with experience. It was devastating to go out but we’ll learn from that over the next two years to be ready for the World Cup.”

Despite Sampson being accused at times of over-confidence when stating England believed they would win the tournament, the setback in the summer doesn’t appear to have knocked the confidence of his players.

“In this squad we believe we are one of the best and we did say going into the Euros we would win it because we wholeheartedly believed we would.

“We did fall short but in our opinion we’ve closed that gap, we’ve gone from thirteenth to third and it shows what Mark has done with this team, we’ve gone from being thought of as average underdogs to a team others want to beat.”

The tournament was at least a positive for Parris herself, the Manchester City winger made her major tournament debut and scored in her first start, slotting home the winner against Portugal in the final group game.

“The tournament was a massive positive for me individually and scoring gave me massive belief,” she said.

“I want to push on from there, I was happy with the minutes I got and now in this campaign I want to imprint my style on this team ahead of the World Cup.”

The Euros showed the rapid improvement of nations such as Netherlands, Denmark, and Austria, and with the likes of world champions USA, plus Japan, Canada, and Australia, the 2019 World Cup will be perhaps the most competitive yet.

But even that isn’t threatening to dampen the confidence within the squad, with Parris stating the team still “believe we can win.”

She added, “We have to believe we can win or else we’d be out at the first hurdle. If we don’t believe then there’s no point competing. We believe and I hope the fans believe because we’ve shown we can beat the best in the world.”

With Sampson and his players now constantly in the mainstream headlines, there’s rarely been a camp with so much attention surrounding it than this one.

Sampson told the media last week that the players had been addressed on the latest situation regarding the allegations when they arrived at St. George’s Park last weekend, but Parris said the team have to concentrate on football.

“I wouldn’t say it’s been easy,” she said. “We’re a part of this team and you feel for everyone involved. I was with this group for ten weeks in the summer but we can’t affect anything. I wasn’t in the squad at the time [of the allegations] and it’s not my place to talk about it, I can only concentrate on playing football.”

One key change for England is the new players called up as Sampson now begins putting together the squad he’ll hope to take to France in two years’ time. With the only dropouts from the Euros the injured Karen Bardsley and retired Alex Scott, there’s a continuity that is becoming familiar under Sampson’s management.

Danielle Carter, Mary Earps, Gemma Bonner, Jess Carter. and Melissa Lawley have all been called up, although the latter duo will miss the game through injuries picked up on camp.

“We’re a tight-knit group of people,” said Parris. “Everyone stays connected and we’ve always ensured whoever comes in are very welcome.”

But Parris couldn’t dumb down the importance of losing a character like Scott from the squad, who bowed out after earning 140 caps for the Lionesses.

“Alex is a big miss because she’s been a big character within the team. She was our little DJ within the changing room so that’s been a topic of conversation when we returned. Alex earned 140 caps, she’s been a valuable member of the squad, and I hope whatever she goes on to do works for her.

And regarding new DJ duties: It’s still up for discussion in my opinion,” she laughed.