Potter, England Prepared for Portugal and Beyond 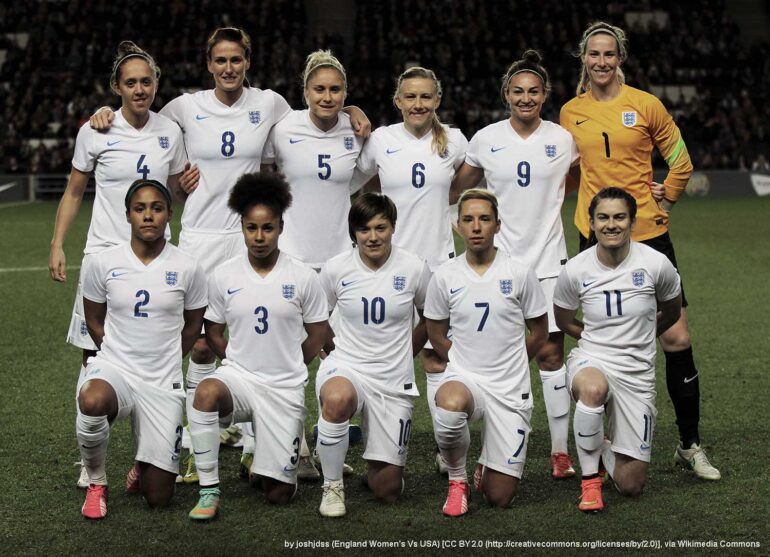 by joshjdss (England Women's Vs USA) [CC BY 2.0], via Wikimedia Commons

It was a very different performance to the comfortable that preceded it four days earlier, but England continued their perfect record at Euro 2017 with a clinical 2-0 victory over Spain.

Clinical because Mark Sampson’s side only managed two shots on target the entire game. Although their opponents, despite having 76% of the possession, managed just one themselves.

Defender Jo Potter made her first appearance of the tournament, coming on for the final minutes to help England see out an important win which should see them top Group D, and Potter is pleased the team are finding a way to win.

“That was one of our game plans going into the match, to find a way to win,” she said. “We knew Spain would be very good in possession, we’ve watched them and analyzed them. We knew for as much possession as they’d have, they weren’t really hurting teams with it, so we knew if [we] bided our time and worked our chances, that we’d get it to our clinical scorers up front.”

There was a controversial incident as the match ticked toward its conclusion with the Lionesses leading 1-0. Coming under increasing pressure from Jorge Vilda’s side, a slip from Ellen White while carrying out her defensive duties saw the striker smash the ball against her own arm, giving referee Carina Vitulano the chance to point to the penalty spot.

But as quickly as she’d awarded the penalty, Vitulano changed her mind after England defender Lucy Bronze briefed the referee on the handball rules and why she’d come to the wrong decision.

It was a stunning admission of a mistake on the spot from the Italian official, but Potter believes the referee should be applauded for righting the wrongs.

“I think the referee realized she’d made a mistake,” said the 32-year-old. “If she didn’t see the deflection of Ellen’s leg, I’m not too sure, but I’d commend her for putting the rules right.

“I think it helped with Lucy, Jade [Moore], and Steph [Houghton] actually just speaking to her rather than shouting and getting in her face. I can only commend the referee for getting the decision right in the end — I’m happy about that.”

Chelsea defender Millie Bright was also unlucky to be on the wrong end of a decision much earlier in the game, just minutes after her club teammate Fran Kirby had given England the lead.

With Spain rocking, Bright headed home a Jordan Nobbs free kick, only to be denied by the offside flag. On first viewing, it appeared harsh, but further replays show Bronze may have interfered with play from an offside position.

Despite being denied her first international goal, Potter praised Bright for a mature performance on the big stage.

“Coming into her first major tournament, she’s done unbelievably well and she deserves all the plaudits that she’s getting at the moment.

Not to just single out Bright for praise, Potter praised the whole team for a disciplined performance. “They were all superb, every single one of them executed our game plan perfectly. We’ve not just got one defender in Millie who could do that, we’ve got two or three.

“You remember Lucy at the World Cup scoring two goals, Steph can definitely pick those headers out, so we’re not short of height and power in the team.”

Coming into the tournament, the experienced Potter appeared to have made herself a crucial part of Sampson’s plans, slotting into his preferred tactic of 3-5-2 during several warm-up games and friendlies.

But with Sampson since reverting to four at the back since the SheBelieves Cup, the experienced defender, who is more regularly found in midfield at club level, has seen minutes and game time limited.

With just a few minutes under her belt so far, Potter will be hoping to start against Portugal on Thursday, but admits she doesn’t mind as long as her teammates keep picking up the wins.

“It’s always nice to start games and play more of a part but the team has done superbly the last couple of games,” she said.

“Coming off a 6-0 victory against Scotland, a 2-0 victory against Spain, we haven’t conceded a goal and we’ve scored eight. It’s football, a winning team is very consistent. Every one of the 23 players in this tournament want to play. If I get to play I’ll give it 100 percent, if I don’t, then hopefully I can still play a major part.”

Lack of goals was a huge talking point for Sampson and England since the World Cup finished up until the final few warm-up games for Euro 2017.

But three goals against Austria and four against Switzerland appear to have come at just the right time: England have scored eight goals from just 12 shots on target during the tournament so far.

And Potter says it’s “not a coincidence” that the team have clicked at the right time.

“It’s definitely not an overnight thing,” she admitted. “We’ve done so much work on our togetherness — both on the pitch and off it.

“We’ve worked with our strikers, the amount of individual work they’ve gone through over the last six weeks in camp, they’ve done unbelievable amounts of work and repetition after repetition. I think it’s come at the right time, the timing has been superb. The amount of preparation time we’ve had coming into this tournament has been top class, we’ve played tough teams and we’ve played each other in tough games too.”

She added, “Coming into last night, knowing we might not have too many chances on goal but really confident in our forwards that they’re going to stick a couple away, and they did.”

With England now just needing a point against Portugal — ranked 33 places below the Lionesses — to confirm qualification to the quarterfinals, the players could be forgiven for turning their attentions to Wednesday’s deciding games in Group C.

Sampson’s side will likely play the runners-up of the group, but with France struggling and Austria currently top, a potential quarterfinal against their bogey side isn’t out of the question.

While Austria would be the more favorable draw given England’s recent 3-0 friendly win, Potter insisted, “it doesn’t matter” who they face.

“We know to lift this cup we have to beat the best,” Potter said. “If that means a France quarterfinal and us getting nine points out of nine then that’s exactly what we’re going to do.

“I don’t think you can ever ask an England team to go into a game thinking about a draw or even a loss — it’s not even a question. 100 percent we’ll be going for nine out of nine. It will be a different game to Spain but we know what qualities Portugal has, so we’ll be preparing just as much as we have been for the last two games.”